Tait is a supremely gifted and well-respected designer, but his place in the fashion world is unclear. 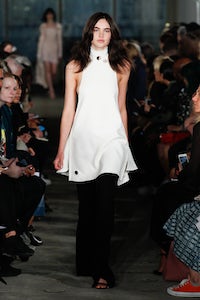 Tait is a supremely gifted and well-respected designer, but his place in the fashion world is unclear.

LONDON, United Kingdom — "It’s not a comment on Style.com or Instagram, but I wanted to make it difficult to tell what was going on with the clothes, that you physically had to be present to know,” Thomas Tait, the designer who was the first to be awarded the LVMH Prize in 2014, said backstage after his Spring/Summer 2016 show. This was also the reasoning behind the very narrow runway, as Tait said he liked the feeling of getting uncomfortably close to someone.

You need to know things like these to appreciate why Thomas Tait is a fascinating designer, one who makes clothes that constantly seem to speak of the plain weirdness of putting clothes on a body. Just take his collection for Spring 2013, which was informed by an aversion to touch — the clothes literally stood out from the flesh, giving the wearer the feeling of being naked. Today, he seemed to muse on the ability of clothes to both obscure and reveal: peek-a-boo holes covered the garments, slits opened, exposing skin, and a cashmere and celluloid ripple dress, which looked solid at a distance, turned out to be see-through up close.

Unexpected parts of the body were eroticised by the clothes, such as knees, which were on display through holes on the mainly flared trousers, or the area between the breast and the shoulder. At the same time a tribal, almost superstitious current ran through it all. The holes resembled symbols with hidden meanings, while the show notes described the dangling earrings as “magical and violent.”

Still, the jury is out on Thomas Tait. His shows can come across as overtly experimental and, as we all know, the attention span of the fashion audience is notoriously short. What's more, working with highly researched materials means Tait's price point is far from accessible, making it harder to sell without a well-known name. (Even the denim trousers in today's collection were made from silk and cotton.) While it is obvious that Tait is a supremely gifted and well-respected designer, his place within the fashion world is unclear.

On top of all, Tait is a restless soul, developing new ideas before the old ones have finished percolating. So, of course, the themes described above weren’t the whole story. There was also antique calfskin, a heavy boiler suit that made the model resemble a totem pole, key rings fastened on the leg, Twiggy eyes reflecting the Space Age feel of the collection, multi-coloured crystals and, finally, bondage — seen in a red belt choker and leather harness details on the knee holes.

In this respect Tait resembles Christopher Kane, another designer throwing up more ideas in each collection than most have in several seasons. But, unlike Kane, he hasn’t found a sweet spot that catapults his designs everywhere and onto everyone. The hard truth is he needs to find it soon, or the fashion crowd will move on. 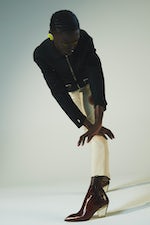