For BoF’s Editor-at-Large, it was a ‘gun-to-my-head challenge’ to pick just one Prada outing for his top shows of all-time, but there was something ‘extra’ about Autumn/Winter 2013 that had instant, primal resonance. 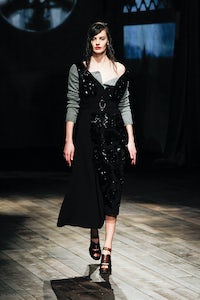 For BoF’s Editor-at-Large, it was a ‘gun-to-my-head challenge’ to pick just one Prada outing for his top shows of all-time, but there was something ‘extra’ about Autumn/Winter 2013 that had instant, primal resonance.

Miuccia Prada has always been a woman of few words. After her presentation for Autumn/Winter 2013, she murmured a typically laconic, “It’s a lot of things I really like.” Meanwhile, I was still scraping myself off the floor after yet another show-of-the-season from Prada.

She’s done that a lot since she first launched her family’s 70-year-old bag business onto the catwalk in 1983. So much so that it was a gun-to-my-head challenge to pick just one show to add to my top shows of all-time list, compounded by the fact that they’ve all been so different, one from the next. Miuccia Prada has never been what you might call an “evolutionary” designer. Obviously, there have been misses among the hits, but even when her shows didn’t give me the perverse emotional high I’ve come to crave, they usually had some twisted intellectual component that kept me tossing in my sleep. I dream about them still.

But there was something extra about that 2013 collection that instantly, primally connected with me. It was the perfect film noir. Invitees were cast into darkness, like an audience in a movie theatre. The backdrop shifted in a constant shadow play: a silhouetted femme fatale, slatted blinds, a ceiling fan spinning, wheeling flocks of birds and a single, restless black cat. Miuccia talked about “raw elegance.” There was certainly that. The models walked on rough, wooden boards; the music was as ominously intense as only Gabriel Yared’s soundtrack for “Betty Blue” could be. But it was more. Imagine a fashion show staged by Val Lewton, the auteur of “Cat People” and “I Walked with a Zombie.” Or, even better, David Lynch, the true auteur of the obsessional and the unhinged.

Seasoned Prada semiologists know that the first look of every show, both the clothes and the model, is the season’s manifesto. Amanda Murphy opened Autumn/Winter 2013, womanly, not model-y, asymmetrically-hemmed dress askew over an equally skewed grey knit top, feet shod in heavy sandals. She looked troubled, her hair lank (from rain perhaps), her lips a rosebud of red. Laura Harring stumbling into David Lynch’s “Mulholland Drive,” LA’s haunted boulevard of broken dreams: how could I not go there? “Stories of women and life,” Miuccia muttered cryptically. “Who cares about the dress?” But then, in a typically wayward gesture, she proceeded to offer us a collection of dresses and suits and coats that we cared very much about.

Clothes as an index of character are a Prada standby. “Through cloth, you can really make movies,” she said after this particular show. Maybe it was the very deliberately cinematic context which created such an unforgettable cast. Here, Miuccia’s favourite things included unlikely fusions, such as the dark glamour of jet beading, the flash of sequins, a plush fur cuff played against solid tweeds, grey flannel, folksy gingham. An unsettling tension — rich and poor, smooth and rough, done and undone — saturated the atmosphere. And all of it slipped sideways into asymmetry. The off-kilter feel of the whole thing, set in deep film noir shadow, felt like romantic obsession run riot. “Romanticism is forbidden," Miuccia said drolly. "It’s not ‘modern.’”

But there’s never been a way to get her more engaged than to confront her with a taboo. Forbidden? Just show her where to sign up. Maybe that’s why this particular collection felt like it might have been particularly personal for Miuccia, even more than the anodyne “things I really like.” She brought back faces from Prada past: Liisa Winkler, Esther de Jong and the eternal Kirsten Owen (in the jade leather suit). She paraded the 40’s-style belted-jacket-flared-skirt silhouettes that have often seemed closest to her own heart. And, as she already said, it was women’s stories she was telling. They were heroines from Tennessee Williams or Dashiell Hammett, maybe dishevelled by life but nonetheless defiant in their gorgeous disarray.

Future students of fashion psychology will weave doctorates around Prada (maybe they already have) but one thing that has always fascinated me is the relationship between Miuccia’s womenswear and menswear. Her designs have usually highlighted female strength while emphasising male vulnerability (even if it’s been in the loveliest way possible). Let’s boil it down to fundamentals: empowerment versus disenfranchisement. A month before this show, Miuccia showed its male counterpart. As elusive and evocative as her womenswear would later be, her men’s was resolutely normal: sweaters, studiously untucked checked shirts, a camel coat, a vintage-y jacket. Maybe she was heading off the raised eyebrow when she rhapsodised, “It’s one of the most sophisticated [collections] I've ever done. Simplicity is so difficult. To make perfect something that is normal and classic is much harder."

I guess the actual ingredients of the men’s show were vaguely similar. It was a fully constructed environment. Rather than the shadowy boardwalk of the women’s presentation, the set was a high-rise apartment. Outside its windows, the same flocks of birds were wheeling, and the same visibly irritated cat paced. The furniture was blockishly modern, and the guitar propped against a chair suggested this was a boy’s apartment, probably a rental. Compare that to the shadowy interior world of the women’s show, the rich, dark melancholy that made such a stark contrast to brightly lit Boystown. Miuccia was emphatic that normal was not the right way to go for her women’s collection. But it never has been, and, with time — and Raf — on her side, it hopefully never will. “I’m obsessed with impossibilities,” she insisted. Fortunately for her, we live in impossible times.