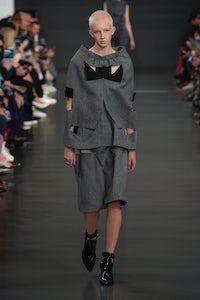 PARIS, France — John Galliano’s new collection for Maison Margiela was seeded in the “couture” he showed earlier this year, men in June, women in July. The proposals from those shows were revisited in sober but challenging ways, the way, for instance, a skirt in classic herringbone was recut as a cape, its waistband now a neckline. Or the cape-like drape of jackets and coats across shoulders. In June, Galliano called that “a shrug, a memory of a shoulder line and a shoulder-pad.” It was as elegant now as it was then.

Memories have always been fuel for Galliano, but this collection saw him furiously engaging with the future, a sort of pre-memory state of mind. Pre-show was a wraparound of videos by Fabien Baron, made to promote Galliano’s first fragrance for Margiela. It’s called Mutiny. Appropriate, given Galliano’s own piratical stance in the past, but also a battle cry for the six women cast to personify the perfume and embody the essence of the collection.

“A manifesto for audacity,” Galliano said of the scent in one of his increasingly fabulous podcasts. Maybe that would assuage those members of the audience who felt embedded in a huge perfume promotion. “Being who you really are is an act of defiance,” added the trans model Teddy Quinlivan, one of the six “mutinists." In 1994, Baron designed the campaign for CK One. Its “unisex” proposition was a radical reflection of the impact of grunge on youth culture. His production for Mutiny was clearly aiming for the same timely edge in its celebration of the beauty of non-conformity.

Audacious and defiant: there would be few better words to define John Galliano’s entire career. This show offered his latest take on “décortiqué”, reducing the familiar to its core, which is the foundation of his work at Margiela. It’s clearly a very freeing notion for him, liberating him from gender, for a start. “I’m uncomfortable using the words ‘men’s’ and ‘women’s’,” he said in his podcast. “To fit, to cut, to drape without thinking about those things is transformative.”

And transformation was the essence, whatever the fashion calendar said. Another of the “mutinists” Hanne Gaby Odiele, wearing a gorgeous, languidly tailored trouser suit, was followed on the catwalk by a young man in a scrunched bustier of couture brocade and sleek black pants. Up next, Paul Hameline, the 21st century’s Dorian Gray, in a ruff of feathers, a shrugged tux jacket and gold brocade pants. Moments later, Sara Grace Wallerstedt in a look that Galliano might describe as “a memory of swimwear." And a trenchcoat/dress wrapped tight in the knit sleeves of a phantom cardigan.

Ghost clothes, leaving traces of a previous life, were a fascination of Martin Margiela’s. At this point, we scarcely need to establish how fundamental the connection between the two designers is, and how enduringly, mysteriously alluring ghost clothes are.

In the midst of our deeply chaotic nowness, Galliano nailed the moment. “To be yourself is the greatest act of mutiny.” It’s up to us to take that message to the streets, or the ballot box, or wherever it will have the most impact. Of course, he’d like you to wear the clothes or spray the perfume. I can do that too.