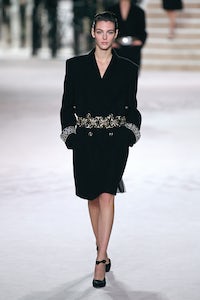 PARIS, France — They say Gabrielle ‘Coco’ Chanel would watch her fashion shows from the fifth step of that famous mirror-lined staircase at 31 Rue Cambon. Step N°5, as it were – her lucky number. Mythic ‘Chanel-isms’ like this were the bread and butter of the late Karl Lagerfeld, whose prowess for eccentric sublimation saw Gabrielle’s codex rewritten year after year in high style. Always recognisable, never the same. He pushed her symbols and made them icons. That staircase was one. Coco’s apartment — with its Coromandel screens and rock crystal chandeliers — was another.

For Virginie Viard’s first Métiers d’Art show as Lagerfeld’s successor, she recreated both inside the Grand Palais, enlisting director Sofia Coppola to co-design the set. As four giant chandeliers descended pre-show, the subtlety of their decor gained momentum. An elegant interplay emerged between the stark mirrored stairs, the opulent interiors (think: drawing rooms spaced around the show set rather than part of the catwalk itself) and the clothes themselves.

As Viard continues her baby steps at the creative helm of the house, her first Métiers d’Art collection ticked all the boxes when it came to infusing ready-to-wear with couture-level craft, drawing upon the work of each of the Chanel-owned Paraffection ateliers, from Lesage and Montex’s extravagant embroidery and Lemarié’s feather and flower craft to Lognon’s pleating and Massaro’s dainty shoes.

But with such decadent possibilities at her fingertips, Viard kept a light hand. She privileged few volumes (a bolero and low-slung skirt were recurrent) and kept to a colour palette of black, white and gold that burst into ombré sunset shades. That somewhat strict frame gave the Paraffection artisans room to move, not only embellishing tweeds and silks but creating entire surfaces, from a shimmering silver jumpsuit or a capelet of camellia-printed feathers to a bubbling pearl-covered cocktail dress.

With the years of Lagerfeld’s architectural tailoring now behind us, it’s clear Viard has a softer approach, playing with tweed in pieces like a two-tone jacket trimmed with seed pearls, man-ish collarless blazers, and a twinset in raspberry satin (its tweed appearing inside out).

For her predecessor and beloved boss, the annual Métiers d’Art collection was one of his chances to go all out. Karl chose to show these collections in cities like Salzburg and Hamburg, in the Dallas Fair Park in Texas, and even the Cinecitta studios of Rome. But with the giant’s wanderlust gone for now, Viard’s own point of view is crystallising.

For one thing, her Chanel is sexier than Lagerfeld’s later years – the opening black coat dresses belted with gold sashes held an almost vampish allure, and displays of skin, from midriff to thigh split, culminated in Gigi Hadid’s bare waist strung with pearls. Along with that, there is a sporty sense of ease that Viard is already making her own, whether it’s a tie-dye cloqué silk t-shirt, or the witty logo play that’s crept into each of her collections — bar haute couture — to date.

So, whilst the Chanel history books have rendered lyrical gems under Viard’s new stewardship, it’s her coquettish and unabashedly Parisian approach that could win new fans. In time, and with Chanel’s (quilted) bag of tricks to draw upon, she’ll surely write her own chapter at the French house.