The collection — which climaxed with a tableau vivant set in a kitchen — was more relevant than ever. 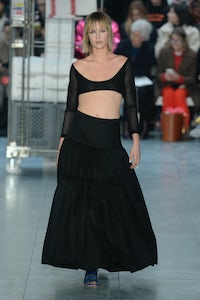 The collection — which climaxed with a tableau vivant set in a kitchen — was more relevant than ever.

LONDON, United Kingdom — After Molly Goddard made a name for herself with puffball frocks smocked in coloured tulle, it took a few seasons for the designer to break out of her pretty little box and prove she’s got staying power. Today’s collection pushed her now-familiar silhouette in new directions, notably moving the balloon skirt shapes up the body to create droopy drawstring peasant blouses or stretching ‘power mesh’ into teensy crop tops that she paired with vase-shaped midi skirts circled with ruffles.

For the latest of her witty show sets, models walked the runway before settling idly into a tableau vivant around industrial cooking stations where they began nibbling carrots and fennel or sipping red wine – the tones of their crude meal echoed in her block-colour separates and complemented by distorted tablecloth checks and a loud rainbow squiggle print inspired, she revealed backstage, by a bouncy ball toy.

Despite nods to the banal, Goddard’s creations err towards the grand and the historical, yet here she tempered that with new elements of structure like exposed zips and inbuilt drawstrings, allowing the wearer to augment the size and shape of her Goddard gown. At a time where both Marc Jacobs and Pierpaolo Piccioli at Valentino are reviving 1980s jewel-toned taffeta, her work feels more relevant than ever.