The beauty company is teaming up with Nordstrom to sell its fragrance. But can Glossier enter wholesale without sacrificing its direct to consumer roots?

NEW YORK, United States — Glossier, the dewy unicorn of go-it-alone retail start-ups, is about to embrace the wholesale machine.

On Tuesday, the brand known for its signature “no-makeup makeup” aesthetic, will enter the main beauty floors of seven Nordstrom stores, including the new New York City flagship and doors in Seattle and Chicago. Each location, which has a temporary, roughly 300-square foot space dedicated to the Glossier You fragrance, is designed to pack the full Glossier experience: millennial pink decor and sales associates in matching jumpsuits.

Glossier had resisted the trend in recent years for hot fashion and beauty start-ups to partner with large retailers. Target now carries Harry’s grooming products, and Nordstrom has opened its floor to numerous digital brands, from Reformation to Everlane to Away.

Emily Weiss, who founded Glossier as an offshoot of her Into the Gloss beauty blog in 2014, has steered clear of wholesale retailers, saying she was unwilling to give up control over how her products are sold. The brand has instead expanded online, via two stores in New York and Los Angeles, and a series of global pop-ups.

The decision to enter Nordstrom came down to the category. Though Weiss told BoF that Glossier You is “one of the most generationally defining, important fragrances,” convincing the public of that fact required branching out from the brand’s tightly controlled retail ecosystem.

“Of all things that you can sell online, perfume is really, really tough,” she said. “The vast majority of perfume is bought where other perfumes are sold.”

Because Glossier only sells one scent, it couldn’t offer shoppers the experience of testing multiple fragrances that often lead to a sale. And customers outside New York and Los Angeles couldn’t experience Glossier You at all. The Nordstrom activations help overcome both obstacles, and will be open during the peak holiday shopping season, when perfume is a popular gift. Glossier spaces inside the retailer will be open through Feb. 16. 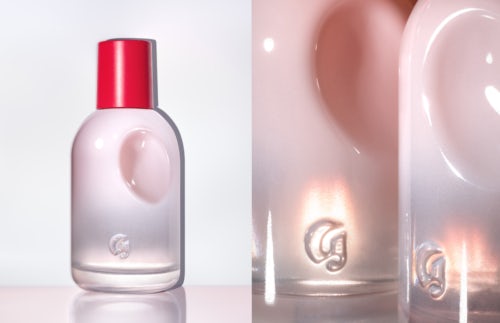 Glossier has experimented with wholesale before, though the Nordstrom partnership is its biggest effort to date, and its first foray into US retail outside its own doors. Net-a-Porter sold the “Balm Dotcom” salve for two years, and Colette in Paris carried the brand for a limited time in 2017.

Much has changed about how brands and retailers operate over the last five years. Department stores have seen sales decline, with new brands opting to sell directly to consumers online, and many luxury mainstays have exited wholesale doors to steer customers to their own channels, where margins are higher. Department stores have fought back by updating their stores and allowing brands to have more control over how their products are displayed and priced.

As a result, Glossier can dictate the terms of its arrangement with Nordstrom in a way that brands of its size wouldn’t have been able to a decade ago.

“[We] designed and created the same experience that we offer customers in our own pop-ups and retail stores,” said Weiss. “We have … this freedom to experiment with offline in a way that most beauty companies that are tied to brick-and-mortar don’t.”

Glossier strengthened its hand further by establishing itself as a leading brand online, rather than relying on third-party retailers to get the initial word out.

“At that point you’ve lost control because so much of your business depended on the wholesalers. You have no leverage,” said Vic Drabicky, founder and chief executive of January Digital, a digital marketing agency.

Glossier has done it in the reverse. The brand has built a strong direct to consumer business with a following bordering on evangelical and controls distribution via its own e-commerce site, flagship stores and pop-ups.

It’s become one of the most in-demand brands to work with.

“You can use wholesale…without being beholden to them, which I think happens with a lot of brands,” said Drabicky. “That’s a much more even, balanced partnership.”

But no matter how closely brand and retailer work together, a brand loses a modicum of control when a wholesaler enters the equation, especially a department store of Nordstrom’s size. Brands can find themselves stocked next to competitors or put on markdown, undermining full-price sales on their own websites.

Weiss said she viewed luxury brands like Louis Vuitton and Chanel as models for how Glossier can operate inside a department store. The luxury houses use concessions, which are basically owned spaces inside third-party sellers.

“If you look at those experiences inside of Saks Fifth Avenue or Harrods, these are really highly controlled,” Weiss said. As an example of how Glossier would exert similar control, she cited the pink jumpsuits that have become synonymous with the brand’s brick-and-mortar experiences.

Of all things that you can sell online, perfume is really, really tough.

Linking up with Nordstrom is a departure from the brand’s offline efforts to date for another reason. Weiss, who said Glossier’s own brick and mortar locations are never optimised for sales per square foot, thought it was important to have the line’s fragrance strategically merchandised for selling during the holiday shopping season.

It’s also a way for customers to check out the brand’s most expensive item before buying. At $60, Glossier You cost nearly four times as much as Boy Brow, the brand’s bestseller. Typically, fragrance is the entry into a brand; for Glossier it’s the opposite.

“If you look at the fragrance floor at Nordstrom, I would guess that this is on the less expensive end of the spectrum,” said Weiss. “Consumers have been trained to think that price connotes quality or luxury or things like that. Our favourite things to do is to shake up those outdated notions.”