NEW YORK, United States — Otherland has a typical start-up story. It counts founders from Casper and Venmo as seed investors. It used digital design agency darling Red Antler for its branding. Its founder, Abigail Cook Stone, has a Columbia MBA and worked for venture capital fund Founder Collective. But despite its modern bonafides, the year-old company manufactures and sells one of the most traditional products out there: candles.

The candle market has always been steady, if a bit sleepy, dominated by mass market giant Yankee Candle and department store luxury brands like Diptyque. But these days everyone from Goop to haircare guru Frederic Fekkai to venture-backed startups like Otherland is piling in. Retailers that traditionally haven’t specialised in housewares are entering the market, too: Net-a-Porter increased its candle offerings by a third in the past year. Sephora has also been courting more candle brands.

The spectrum of new brands includes plenty of indies with quirky scent names but also a growing number of fashion giants, which see candles as a way to snag entry-level consumers, expand into the lifestyle space and — because this is 2018 — pack a visual punch on Instagram.

Louis Vuitton, for instance, entered the category this month by offering $185 ceramic candles with leather handles — a steal next to a $2,000 handbag.

Prestige candle sales totalled $101.9 million in the US in the 12 months ending September 2018, according to the NPD Group. While that’s a modest portion of the overall $4 billion fragrance market, it's growing faster than the rest of the category, rising by one-third over the last two years.

It’s not difficult to make candles in your kitchen, as the many sellers on Etsy can attest and as popular indie Boy Smells did at first. There are stores that sell candle-making supplies, and essential oils are available in abundance. But to expand beyond farmer’s markets and small gift shops now requires a sophisticated sense of design and a certain amount of internet savvy.

If you want to know what Otherland’s “chandelier” or “daybed” candles smell like, you have to buy them first. They’re only sold online, for $36 each. Stone said it was an issue when she was trying to fundraise.

“People would say, ‘You're crazy. People want to smell before they buy,’” she said.

Stone says she was inspired by a fast-fashion model, meaning the company can turn over collections quickly. The wax and vessels, which are whiskey tumblers from American glassware purveyor Libbey, stay the same, while the scents and art change seasonally. Otherland works with master perfumers like Frank Voelkl, the man behind Le Labo’s popular Santal 33 and a co-developer of Glossier’s You.

You've got to create this trust, credibility, authenticity and traffic really quickly and without being able to rely on Nordstrom to tell people you're cool.

But to really hook customers, she focuses on the candle’s looks. The modern candle market is all about design and catching attention on Instagram, so Otherland collaborates with artists to offer different limited edition collections each season. (Stone worked at Ralph Lauren as an art buyer before getting her MBA.)

“We really wanted to invest in brand and design,” she said. “You've got to create this trust, credibility, authenticity and traffic really quickly and without being able to rely on Nordstrom to tell people you're cool.”

Beauty retailers in particular have taken notice and are adding or beefing up their candle assortments beyond well-trod favourites like Diptyque, Cire Trudon and Byredo. Often consumers are buying candles to use as part of their beauty or wellness routines. Some brands’ best advertising comes from beauty influencers demonstrating face masks with a fetching candle flickering nearby.

“There’s something so ritualistic about lighting a candle,” said Alexia Inge, founder of UK-based Cult Beauty. Candle sales at the retailer have increased 61 percent over the last 12 months. Inge recently added sculptural candles from British furniture designer Tom Dixon, Fekkai’s beauty brand Bastide and Overose, a Parisian candle brand that has caused a sensation on Instagram because of its striking pink and holographic jars.

“The consumer is looking for longevity when purchasing candles and they are very much intended for display,” Hands said. Customers often repurpose the vessels after burning the candles.

For fashion houses and designers, candles can offer a more accessible entry point into a brand for customers. It also allows them to expand categories.

“Doing a candle is so valuable because it's a segue into lifestyle,” said Frederick Bouchardy, who founded the Brooklyn-based Joya Studio in 2006. In addition to its own brand and collaborations with off-the-beaten-path entities like Califia Farms (the almond milk producers), Joya produces candles for beauty brand Malin + Goetz, fashion brands like Billy Reid and Zero Maria Cornejo and hotel giant Marriott.

Even if you’re Gucci, you have to deliver. A regular glass candle that says ‘Gucci’ on it probably isn't going to cut it anymore.

“They understand that it allows people to get a piece of the brand. But even if you’re Gucci, you have to deliver,” he says. “If it's just a regular glass candle that says ‘Gucci’ on it, that probably isn't going to cut it anymore.”

Gucci did far more than that. It has launched two collections of fragranced candles in the last year, which are in lidded, ceramic vessels painted in bright colours with recurring house design motifs, like bumblebees. They’re priced at $300 to $600.

At Louis Vuitton, Marc Newson, an industrial designer who has done extensive commercial work with luxury firms, designed ceramic “handbags” that sit on a golden holder that doubles as a lid. They feature hand-painted coloured wicks, a unique visual element.

In June, Dior overhauled and rebranded its small La Collection Privée fragrance and candle range, which first launched in 2004 in limited distribution. It’s now called Maison Christian Dior and features 22 fragrances, eight scented candles ($85) and even silk scarves that can be scented for personal wear. For flair, the minimalist white jars are filled with brightly coloured wax. While Dior is opening freestanding boutiques around the world — and the product can also be found in department stores like Saks and Selfridges — the real showcase is a fully decorated and branded apartment in Paris that acts as a concept space.

Plenty of independent brands are joining luxury houses and beauty giants in the candle boom.

Amanda Buhse launched Coal and Canary in 2014, and sells about 30 scents today, including five exclusive candles for Sephora with names like “Fake Lashes & Camera Flashes” and “Smokey Eyes & Dreamy Guys.” Prices are about $30. The wicks are wood and crackle “like a little fireplace,” Buhse said.

Buhse said sales took off in 2015 after she blind-emailed a company that provides gift bags for awards shows. It picked Coal and Canary candles for both the Oscars and Grammys gift bags, resulting in dozens of wholesale requests and even one from Beyoncé’s hairdresser, Neal Farinah, who wanted them for his salon. 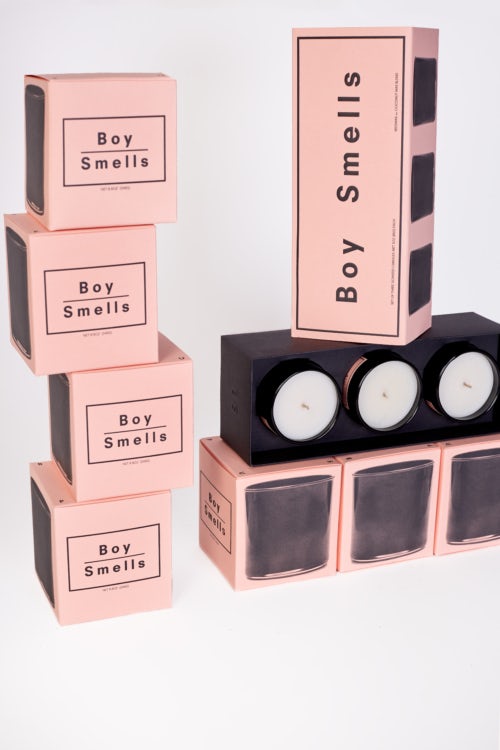 Matthew Herman and David Kien launched Boy Smells in 2015 out of their basement, and grew a fan base with their millennial pink jar labels and best-selling “Kush” scent. The brand “pokes fun at scent being assigned to gender,” Herman said. “We love the conversation around gender inclusion and gender fluidity.”

Herman and Kien, who are partners in life and in business, have fashion industry backgrounds as a designer and production specialist, respectively. Seventy-five percent of the business is in wholesale, and the brand is about to enter Barneys. Of their $29 price point, below many of their competitors, Herman says, “We’ve marked our product up in the same model as apparel, at least in our apparel experience. I'm actually more baffled at how other people's candles are so expensive!”

Making candles can be tricky and capital-intensive, however.

The fragrance ingredients incur the most cost. While candles usually require a lower concentration than personal fragrances, they’re trickier to work with, said Ashley Balavoine, a perfumer with Firmenich, an international fragrance and flavour company that works with hundreds of brands. Some ingredients, like citrus oils, can smell like diesel when burned. Others have low flashpoints, meaning they can combust in the presence of open flames. Soy waxes can diminish scent.

“It’s quite technical,” she said.

Then there are the materials. While the indies keep their costs down by using commercially available jars, Otherland’s Stone said she was surprised at how complicated and expensive the outer shipping packaging had to be both because candles are fragile and because she wanted customers to have the unboxing be an experience. She also incurs costs producing specially die cut labels, while many brands use standard rectangular shapes. Coal and Canary’s other co-founder, Tom Jansen, just completed instruction in Grasse, the world capital of perfumery, to learn how to formulate fragrances himself to cut down on costs.

The Future Is Lit

Candlemakers are confident that there is room for more growth in the category, emboldened by millennials who are accustomed to accessorising their homes with scent and by retailers that continue to increase the breadth of their offering.

Consider the trajectory of industry veteran Laura Slatkin’s current venture, Nest Fragrances, which she started in 2008 and is sold in Nordstrom, Neiman Marcus and Sephora, among others.

Despite qualifying as home-fragrance royalty, getting candles into Sephora proved tougher than expected, Slatkin said. She first approached the company in 2013, but the beauty retailer was only interested in Nest’s fine fragrances. Only in the last couple of years has Sephora come around, a shift Slatkin attributes to millennials’ growing spending power.

“Baby boomers did not grow up with home fragrance as part of their lifestyle,” she said. “I think the demand is really coming from millennials now. There's this generation that grew up with it who are now entering into the marketplace.”

The Hygge Effect: How Beauty Is Cashing In on Cosy