With e-commerce set to become the leading channel for luxury sales, brands must rethink their stores to make sure they remain relevant and profitable, writes Pierre Mallevays. 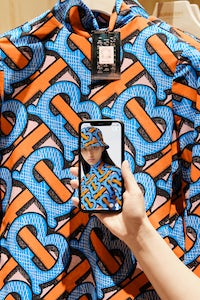 With e-commerce set to become the leading channel for luxury sales, brands must rethink their stores to make sure they remain relevant and profitable, writes Pierre Mallevays.

The share of luxury goods sold online almost doubled to 23 percent in 2020, with digital helping to mitigate the loss of sales from brick-and-mortar outlets. And in the not-too-distant future, e-commerce is set to become the sector’s dominant channel.

The gradual re-opening of stores has led to a significant recovery in total sales. For instance, Burberry’s same store sales grew by 32 percent in the quarter ended March 2021. Estée Lauder, which has suffered disproportionately from lockdowns and international travel restrictions due to a high exposure to travel retail, is expecting a strong improvement in sales from physical locations, with productivity increasing as underperforming third party locations have been shut over the last year. But e-commerce sales show little sign of slowdown.

How to ensure physical retail remains relevant, and profitable?

Bringing the digital and physical worlds together is one approach that is gaining momentum. Sephora’s new Beijing flagship has embraced the digital world, with digital artwork “Algorithmic Blossom” by acclaimed young artist Chen Baoyang throughout the store, an augmented reality photo booth and, most interestingly, a 24/7 presence thanks to a virtual store platform on a dedicated app and WeChat Mini Programme, which can also be used to book appointments. Taking algorithms to a new level, the store offers to find your perfect match in fragrance using big data to interpret a psychology test customers complete at the store’s fragrance studio.

Burberry’s Shenzhen flagship also deftly melds digital with physical. Via WeChat, visitors can hatch an avatar and interact with the store’s window display, pre-book a changing room to try on pre-selected clothes with personalised music playing in the background. The avatar can also be used to book a table at the in-house café and make appointments with stylists and other services. To encourage engagement, the programme has a rewards system that allows consumers to earn “social currency” that can be used to unlock custom content, such as new characters and outfits for the avatar and exclusive dishes on the café menu. All the products have QR codes, which can be scanned to display more information and visual styling tips, earning consumers more points that they can use to unlock more content.

Contrast these two examples with the recent collaboration between Burberry’s Ginza store and Elle to provide customers with a Google Street View-type walk through the store with the occasional ability to click on a product to find out more and you will see that a lot more work needs to be done in this area.

Providing a special experience that cannot be had online is also becoming increasingly important. Flagships, which had their genesis at the turn of this century when luxury brands were trying to attract customers away from multi-brand department stores into a captive, mono-brand universe, are now upping their game to get customers off their tablets and into the store.

Louis Vuitton re-launched its Ginza flagship in March featuring an eye-catching exterior that could be mistaken for a tower of rippling water, complemented by monogram jellyfish suspended throughout the interior of the store. Bursting with art and design, the flagship features a private salon for VIP customers, a restaurant and a permanent pop-in space that allows the brand to showcase seasonal animation for new arrivals. In addition to this, there will be products made exclusively for sale in the Ginza store.

“It’s not about taking what we did in Paris and replicating it in Tokyo… what we have to be involved with goes way beyond commercial, it’s cultural,” explained Louis Vuitton’s chairman and chief executive Michael Burke. “The objective is engaging with your clients in every single city. They’re demanding a Vuitton point of view on their city.”

Clearly only the biggest brands can afford to do this. Even a sizeable brand such as Prada almost lost its shirt in the early 2000s with a flagship strategy that was too aggressive. And remember, Louis Vuitton’s Ginza store took 5 years of planning. We are now all too painfully aware of how much change can happen in much less time.

The pandemic has changed not only the way people shop but the way people work and live, with many taking the bold step of moving out of cities and working remotely. This means that boutiques located in second-tier cities often performed better than those in major luxury destinations over the last year. The question of whether the exodus from city centres prompted by the pandemic will stick and change the way retail is done remains open. Potentially it reinforces the need for destination flagships in luxury capitals to lure locals and tourists alike, complemented by a click-and-collect network of boutiques in peripheral towns and cities, experience being the key word for flagships and convenience for boutiques.

What do these deals have in common? Both Puma and Club Monaco are heavily exposed to brick-and-mortar: puma.com generated about $280 million in 2020, compared to the group’s consolidated sales of over $6 billion; Club Monaco only sells online in Canada and the US, but has a retail network of over 140 boutiques worldwide. Meanwhile, Contentsquare, a French start-up founded in 2012 to help e-tailers understand the behavioural patterns of their customers, hit a valuation of $2.8 billion in its latest raise last month, a record for a “French Tech” company.

The Savigny Luxury Index (“SLI”) gained close to 7 percent in May as more evidence of a strong recovery came through in the latest quarterly results, outperforming the MSCI by over 10 percentage points. 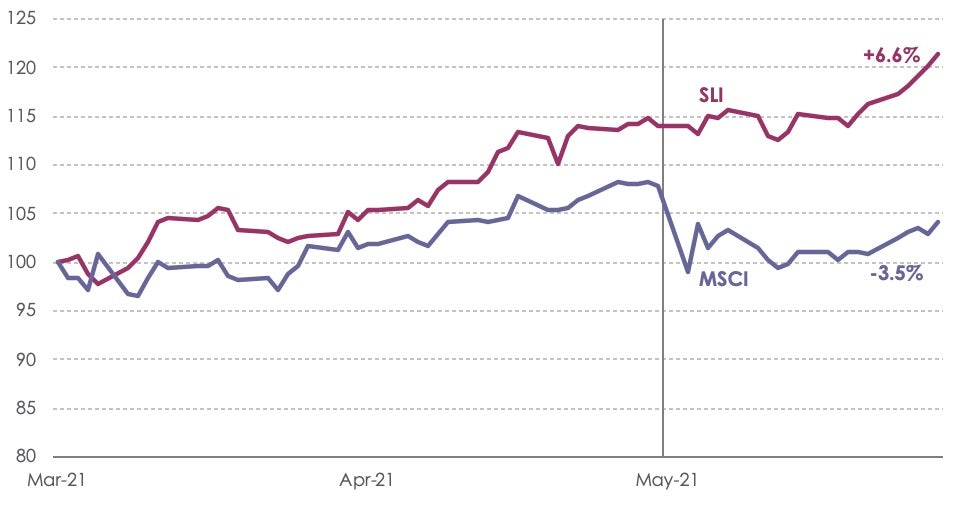 Pre-pandemic, close to 50 percent of all luxury purchases were made by tourists. Travel retail remains the last bastion of purely physical retail as the final purchase needs to be made in designated duty-free locations. When international travel resumes, the travel retail channel will regain strong relevance as an important physical touch point for brands. Expect to see brands and their airport landlords become more creative in offering a more interesting consumer experience. 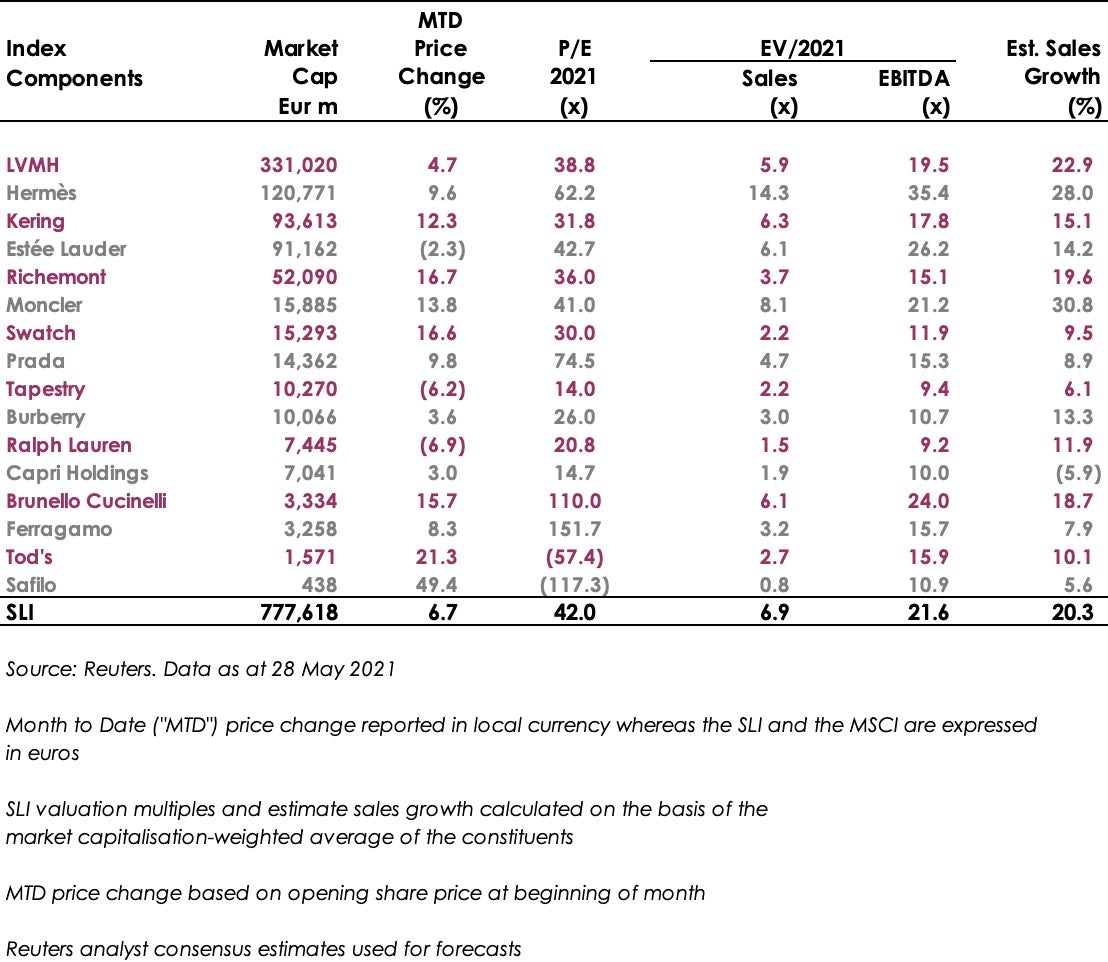