NEW YORK, United States — Here’s something you might not know: In 1993, when Kate Valentine and Andy Spade founded the quirky fashion company, they weren’t yet married and Kate went by her maiden name, Brosnahan. The idea was to combine Kate’s first name and Andy’s last — much to Kate’s mother’s dismay. Years later, when they launched the men’s line Jack Spade, it was Andy’s turn for years of mistaken identity.

Kate Spade New York no longer belongs to Kate and Andy, but it is still very much in the consumer’s line of sight, having been bought from Neiman Marcus Group for $124 million in 2006 by Liz Claiborne, Inc. (The public company is now called Kate Spade & Co.) After the founders departed in 2007, Kate took a break from fashion, embedding herself in the philanthropic world, while Andy — who worked as an advertising exec before Kate Spade, where he was in charge of all creative — started the agency Partners & Spade. Subsequently, he founded the sleepwear-as-leisurewear line Sleepy Jones.

Now, they are making a comeback and Kate has changed her surname from Spade to Valentine — a family moniker that is also a part of the Spades’ new venture, Frances Valentine. The architecturally-driven and modernist accessories line, which shares that particular wittiness so ingrained in the designer’s aesthetic, will ship to retailers the second week of February. 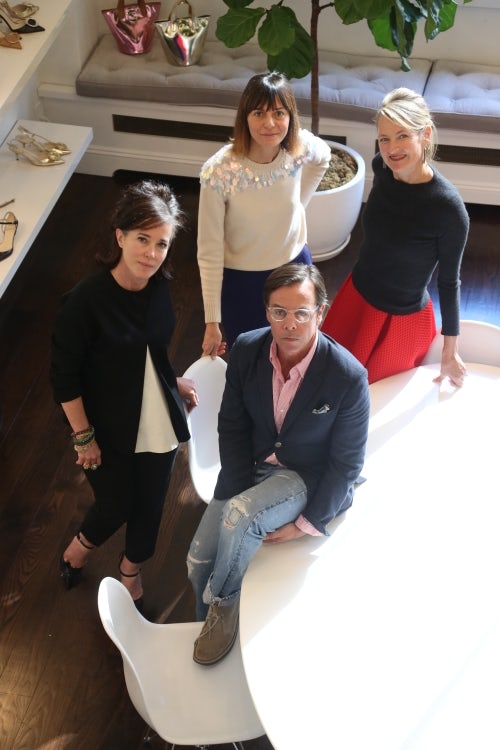 Valentine hopes that the change will differentiate what she’s doing now with what she’s done in the past. As for the name...“It kind of makes [me] sound kind of cool, like a rap star or something,” she jokes. “But we’re not trying to be cheeky or coy. It really was to distinguish the name, and separate the two worlds. Obviously we’re super proud of Kate Spade and we want to be respective of both,” she says.

Over the years, whatever projects they’ve worked on, the husband and wife’s creative partnership has remained a constant. Having met at Arizona State University at 19 — they are now 53 — it’s not surprising they’re going for it once again. In fact, the dynamics of Frances Valentine aren’t terribly different to the early days of Kate Spade, although the objectives have changed. Today, the focus is on shoes. Early hits with retailers such as Bloomingdale’s and Nordstrom include the ‘Valentina,’ a high-heeled scrappy sandal with a tassel tie ($450), and the ‘Marnie,’ a short boot with a geodesic heel that references the work of the American architect, Richard Buckminster Fuller ($755). The Spades have also brought a couple of friends on board, including a long-term associate Elyce Arons, and shoe designer Paola Venturi, a Kate Spade and Prada alumna.

The Frances Valentine showroom and studio has walls filled with art worthy of a gallery, and a David Weeks chandelier hanging from the double-height ceiling. As ‘The Royal Tenenbaums’ soundtrack plays in the background, the couple sit down with BoF to discuss why they decided to get back into the increasingly competitive fashion business.

BoF: How will Frances Valentine be different from what you've done before?

Kate Valentine: The biggest difference with the bags this time is that we’re doing fewer. I’m not in any hurry. It’s not fun for me to have a business that is not a business.

Andy Spade: We’ll start out with the shoes and bags, and then once we get that established we can do other things.

KV: We’re doing it 100 percent ourselves.

AS: With Elyce [Aarons], our partner. No outside investment allows us to take our time. A lot of investors want return, and we’re basically looking at this as our next 20 years, so it might not build up so quickly.

KV: I do like the idea of direct to consumer. But, at the same time, there’s a great relationship that you can have with retailers if it’s equal and balanced.

AS: We mostly do direct-to-consumer with Sleepy Jones. With Frances Valentine, we’ll obviously be an online business and I would love for it to be really, really successful. But I think it remains to be seen. We’ve been looking at locations and have been close to signing a lease for a store, but I think we want to get the shoes and the bags right first. The same way we did at Kate Spade.

KV: I’m more conservative in terms of that kind of risk. As for the retailers, I think that they’re just waiting to see how things sell through. I don’t see a big difference in how they approached buying before the recession and now.

AS: I think if they’re going to give up space for something that’s new, they want to see something special. There are thousands of shoes. If they think someone else is doing it already, they don’t need you. I think they’re very careful to decide what is right for them and the store concept.

KV: That has always been the case, though. I’m in the appointments — not throughout the whole appointment because I don’t want to hover around and make them nervous so they can’t say what they feel — but I’ll come down and just take a peak at their vibe and get their thoughts. I don’t really feel that it’s any different.

KV: Why bother? I felt like doing something. I’ve been really involved with my daughter, her school, and not to sound like I’m some kind of philanthropist but….

AS: You were the chair of the board for —

KV: The New York Center for Children. It’s a really small, bare bones organisation and they needed some help. It was really hands on.

AS: I can say why I wanted to do it. Kate loves to create and we obviously love working together. She loves shoes. It’s a time, you know, when our daughter is —

KV: Getting older. She’s in school, studying a lot, a little more hands-off.

AS: Yeah, I think it’s a good example for my daughter to see her mother work. Not that she didn’t before, but to see her work [as a designer].

AS: We also wanted to do it as a group. We wanted to work with our friends and let it take its own time. We didn’t want to force it.

KV: Elyce and I met when we were 18, freshman in college. She became one of our partners early on [in Kate Spade].

AS: Elyce has great style, she’s organised, and she has a business mind. Paola [Venturi] worked for Kate Spade for seven years as a designer. 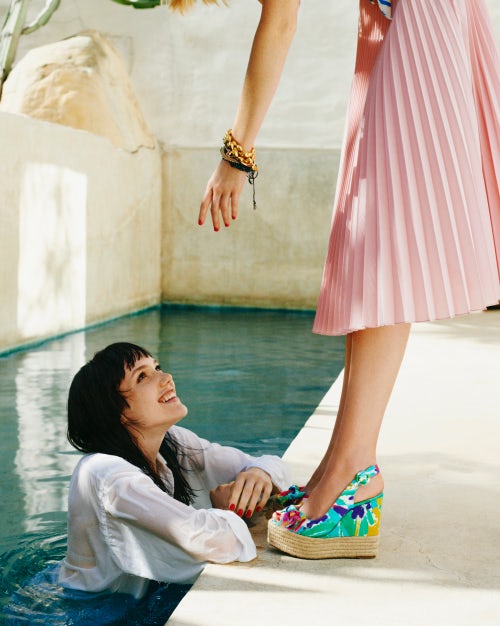 KV: I do think some people were disappointed that Frances Valentine was focused more on shoes. Before I left Kate Spade, designing shoes was the best experience. I just adored the little details.

AS: I think you can be more creative with shoes. Bags are, you know, a practical thing that you have to put your wallet in. When we started in the 1990s, ready-to-wear designers weren’t doing bags and accessories. Now, everyone is doing accessories. There are a lot of designers who do accessories because I think the financial people tell them they need to make bags or shoes.

KV: And we’re just better at it than most. I don’t really understand [designing clothes] as well. I know what to do with shoes and bags, and actually jewellery too.

AS: It’s like industrial design. We don’t know how to drape or cut fabric or do tailoring, we’re not those people. And we didn’t inherit a house with an archive, so we’re making it up as we go.

KV: My design process doesn’t involve a lot of mood boards. It’s really scrappy. We’re drawing and sketching on little pieces of paper. We start with design ideas. We don’t really have a merchandising plan, but that didn’t hurt us the first time around so hopefully it won’t hurt us this time. I don’t want the collection to look like a flea market, but when I go into a store, I can feel if it’s too tightly merchandised.

AS: I come from branding, where it’s about making it all consistent. Consistency and branding isn’t as relevant in fashion as it is in other businesses. I advise companies on making things consistent. But when it comes to shoes, I don’t want an evening shoe that looks like my tennis shoes. Someone said that we should do a running shoe because it’s a big trend. So, Paola was working on a running shoe. Kate said she’d rather wear New Balance. Other people do it better.

BoF: How do you work together?

AS: Kate will pick apart a colour. She’ll go through it 80 times to make sure it’s the right brown. I think I’m more ‘broad concepts’ and Kate is more detailed.

KV: The sensibility is the same. This time around, I like the idea that it’s small, intimate, and that everyone that we work with we’ve worked with before.

AS: It’s a true team. Kate never wanted to be in the front. [At Kate Spade] you ended up being the one on the front lines all the time, which you didn’t really want to do.

KV: I like the idea of being more behind the scenes and bringing Paola out and giving credit where credit is due, instead of being Oz.

AS: Kate knows what she wants to wear and she really focuses on her taste and style. I bring in the more conceptual ideas.

KV: I trust your opinion more than anyone.

AS: I’m always looking around at everything. Paul Smith said: “Inspiration is everywhere.”

KV: Collecting is a very elegant word for what he does. I wouldn’t really call it collecting, I would call it hoarding.

AS: We’ve been partners for 30 years, and we think alike. We agree in terms of design. We have different approaches, but we agree.

BoF: What did you learn from your experience with Kate Spade?

AS: The first time around, we didn’t come from fashion, so we were making it up as we went. This time we can trust our instincts and have a business that might not be big, but we can love everything we make. Before we were a little bit afraid. We’re listening to ourselves.

I look to APC, Aesop, Margaret Howell, Paul Smith. They’re doing what they want to do, not running it by a marketing team. There’s no theme for the first campaign. I grew up in the desert, so we shot in the desert. I hope that it says something personal. We don’t take it too seriously. The product we do, but the advertising we do not.

Today, what’s challenging for us is making it personal. It’s not putting your face in the ad, but it’s having your personality in the imagery.