LONDON, United Kingdom — Apparel industry veterans around the world seem unimpressed with Donald Trump’s Twitter declaration that trade wars are “good, and easy to win.” More than a few high-profile individuals have spoken out since the US president escalated his protectionist rhetoric this month. But are they really worried the fashion industry could get caught in the crossfire?

“Trump’s actions, and any reactions coming from Turkey or any other production country, are not in sync with the times we’re living in,” says Marco Lucietti, a member of several advisory boards in the Turkish apparel industry, with over 20 years in the sector. “A globalised economy will find solutions to overcome the tariffs imposed by Trump or any other governments.”

Turkey is one of more than 20 countries that were initially believed to be impacted by Trump’s threat to impose tariffs on US steel and aluminium imports. In retaliation, some floated the idea of slapping American apparel products with a tariff. The European Union, for instance, provisionally earmarked iconic American denim. Then things got even more serious when Trump announced a $60 billion levy on Chinese consumer goods imports.

For the past 40 years, trade relations between China and the US have been irrevocably intertwined, based on an assumption of US implementation of free trade, and China’s economic liberalisation. In 2016 the US accounted for over 10 percent — $42 billion — of China’s textiles and clothing exports, according to the World Integrated Trade Solution, with China enjoying an overall $347 billion trade surplus that rose to $375 in 2017.

The planned import tariffs of 25 percent on steel and 10 percent on aluminium are unlikely to directly affect sectors like apparel and textiles. Retaliatory measures, however, have been a real concern. But 24 hours before their implementation, Trump announced temporary exemptions for the EU, Argentina, Australia, Brazil, Canada, Mexico and South Korea, while trade talks with those markets were ongoing.

The dependence of American retailers on China-made fashion products is staggering.

The real danger was seen to be the tariffs on Chinese imports, which could potentially include consumer products in the apparel and footwear sectors. While the first round of targets will be announced on Thursday — and is unlikely to include products in the sector — the potential for the fashion industry to feel an impact further down the line is nevertheless present. The wider effects through counter-retaliatory measures could also potentially spiral out further to other countries in the fashion supply chain.

The EU, for instance, targeted $3.5 billion of US goods — before the exemption was announced — including iconic brands like Levi Strauss & Co. jeans, on top of a punitive tariff of 25 percent on American products that range from sneakers to T-shirts. Passing the burden on to consumers, import tariffs would not only have raised apparel prices — EU imports of apparel from the US amounted to 11.9 percent of overall US exports in the sector, according to BMI Research — but also taken a hit for sourcing from the US, jeopardising the “Made in America” brand.

Tariffs on China would fall on consumers directly. While the first round of targets will focus on high-tech sectors, China’s dependence on the US for exports signals apparel as a likely target. A tariff in Chinese imports would translate into higher price tags in stores, since neither wholesalers nor retailers can absorb the entire amount levied.

The dependence of American retailers on China-made fashion products is staggering and should be a red flag for brands like Nike and Victoria’s Secret. Over $14 billion of imports from China are in the footwear category, according to the US Census Bureau. For sneakers in particular, China is the second-largest supplier, accounting for 35 percent of US imports. Meanwhile in the handbags category, China is the largest foreign supplier by volume. 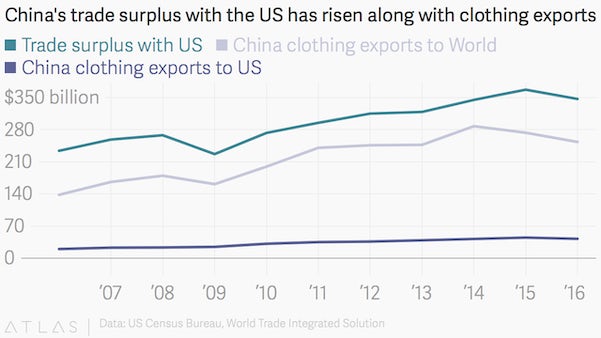 What’s more concerning is China’s promise to strike back with plans to levy duties on up to $3 billion of US imports and punish US businesses who rely on the country for large portions of their revenues, which includes stalwarts like Nike and Apple.

However, “it doesn’t appear there will be action taken against US apparel exports,” says Richard Darling, executive director of government and trade relations, and corporate sustainability, at Hong Kong-based global sourcing giant Li & Fung. “The action that could be taken might include cotton, but that’s not necessarily what will impact the most — there are many other countries that produce cotton.”

So concerning is the prospect of import tariffs that a number of US retailers, including Target, Macy’s and Wal-Mart, penned a letter to President Trump urging against tariffs on China. “Applying any additional broad-based tariff... would punish American working families with higher prices on household basics,” the retailers wrote, with brands like Nike and Under Armour adding that footwear is already subject to high tariffs.

An additional letter was written by trade bodies CFDA and AAFA — the American Apparel and Footwear Association whose members include Ralph Lauren Corp and Tapestry — which highlighted that companies would be forced to raise prices for footwear and apparel, or reduce their American workforce.

But while the US-China-EU triangle is undoubtedly critical, Trump’s tariffs could trigger a domino effect prompted by retaliatory protectionist measures on behalf of emerging market economies. Such a scenario could threaten to derail a recovery in global growth — or what some have called a synchronised global expansion since 2011.

China, for instance has vowed to defend its “legitimate rights and interests” when targeted by US trade actions, while Turkey could retaliate by hiking up duties in imports of American cotton, said one of president Tayyip Erdogan’s advisers. Turkey’s move is likely to set the US back — it is home to factories that supply retailers like Zara and Adidas, and imported $519 million worth of US cotton in 2016, according to the United States Department of Agriculture.

Should the US target Chinese apparel imports, major exporters like Vietnam and Bangladesh could snap up market share.

Elsewhere, the prospect of a trade war confronted investors with an increase in uncertainty over the growth outlook in emerging economies like Mexico and Russia, whose currencies were hit. Many of these emerging markets are export-dependent and could face higher prices throughout the supply chain.

But not all markets would be worse-off. “The other countries in Southeast Asia stand to be a gainer if apparel were to be affected, because those are the countries where production would move to,” says Darling. “If there were to be apparel tariffs on China, Southeast Asian countries would gain.” Indeed, should the US target apparel imports, major exporters like Vietnam and Bangladesh could snap up market share.

While the unpredictability of president Trump’s policies makes worries for the apparel sector legitimate, a more subdued mood has taken hold over the weekend.

Wall Street experienced a rebound on Monday as fears over a potential trade war were calmed following reports the US and China are willing to renegotiate tariffs and trade imbalances, and all three major US stock market indexes were up more than 2 percent.

Nevertheless, companies like Li & Fung, which helps retailers like Walmart and Kohl’s source their products in factories from China to Bangladesh, have adopted contingency plans should apparel eventually become a target. “The first thing we did very early on to insure if apparel was included, we began to make plans to help our customers shift their production where necessary,” said Darling.

Clearly, it is far too early for the fashion industry to let its guard down given how tangled supply chains now are and how interdependent the global economy has become. The mood between the major players in this would-be trade war may be softening now but, if the last year has proven anything, it is that more volatility could be around the corner.

EU Proposes Retaliatory Tariffs Against US Clothing and Cosmetics