What the Troubled Tokyo Olympics Means for Brands

Officials insist that next month’s controversial Olympic Games will go ahead after being postponed once already, leaving fashion and beauty brand sponsors in a bind.

What the Troubled Tokyo Olympics Means for Brands

Officials insist that next month’s controversial Olympic Games will go ahead after being postponed once already, leaving fashion and beauty brand sponsors in a bind.

Last March, Japanese luxury skin care brand and official Olympic partner SK-II staged a takeover of New York’s Times Square with 22-year-old American gymnast Simone Biles, whose fans gathered to watch an animated film, starring her, unfold across the hub’s iconic billboards. The rest of SK-II’s six-part “VS” series, exploring societal pressures faced by female athletes, was scheduled to launch in the months leading up to the quadrennial sporting event.

Weeks later, when the Games were postponed and cities like New York entered their first lockdowns, SK-II’s plans came to an abrupt halt and its years-long investment hung in the balance. “Where the competition wouldn’t be happening, that story kind of fell flat,” said Delphine Buttin, SK-II’s senior brand director. “Everything Olympics campaign related, stopped.”

More than a year later, the most heavily sponsored sporting event in history is finally set to begin on July 23 and brands’ Olympic campaigns have resumed. Following the April premier of the docu-drama made by SK-II’s in-house studio featuring swimmer and cancer survivor Rikako Ikee, directed by Hirokazu Kore-eda, the beauty brand rolled out the full VS anthology on May 1 — and it still has another Olympics campaign up its sleeve.

But the road to the Olympics has been exceptionally fraught; Seiko Hashimoto was appointed in February after her predecessor, Yoshiro Mori, resigned over making sexist remarks. Since then, upticks in Covid-19 infections, a nationwide state of emergency and a sluggish vaccine roll-out programme have prompted calls for the Games to be cancelled by the Tokyo Medical Practitioners’ Association, business heads like the chief executive of top Japanese e-tailer Rakuten, who deemed the games a “suicide mission,” and official Olympic partner and newspaper Asahi Shimbun.

The public largely agrees. Even without the associated health risk of foreign spectators who have been barred, an Asahi Shimbun poll published in May revealed that 83 percent of residents don’t want the event to be held. Some even pledged to boycott products from event sponsors, which include fashion, retail and luxury players Omega and Asics (the brands did not respond to BoF’s request for comment). This month, Japan’s organising committee said that around 10,000 of the 80,000 volunteers for the Olympics and Paralympics had quit.

Even so, partners like SK-II are working to make the most of their investment in the event, which will not bring the wave of tourism that was supposed to provide a boost to retail. Meanwhile, local businesses struggling to stay afloat in Japan’s hard-hit retail sector are hoping for a return to normalcy, which many fear will only be further postponed if the Games become a super-spreader event.

It’s no secret that the Olympics are a major investment: the $100 million that some brands pay to the International Olympic Committee (IOC) — in exchange for four-year packages granting them marketing rights — make up around 20 percent of the IOC’s revenue. Teams often work on activations and campaigns centred around the Games for up to three years. “Usually when you’re done with the Olympics, it’s not a lot of time before you start working on the next one,” said Mario Ortelli, managing partner of luxury advisors Ortelli & Co.

You need to look at the glass half full... the Olympics are still the first great global initiative happening post-pandemic.

Partners are now focused on making the most of less-than-ideal circumstances. “Brands are stacking the odds in their favour,” said Ortelli. “You need to look at the glass half full... the Olympics are still the first great global initiative happening post-pandemic.”

For SK-II, the optimistic message conveyed through its campaigns proved more poignant than ever in the wake of the pandemic, which has been especially difficult for working mothers. “Societal pressures faced by women were heightened,” said Buttin, who didn’t think that the postponement was a step back for SK-II’s campaign. “We have an even stronger plan now.”

So far, the VS series has drawn around half a billion views and over a million likes, shares and comments, with many commentators relating to the athletes’ struggles. Whether or not the games were cancelled was not a source of stress for the brand, said Buttin. “We’re telling [the athletes’] personal stories; whether the Olympics happen, we were going to tell them anyway.”

The impact of the pandemic on the games is unlikely to dent the goodwill that brands gain by association; alongside TV commercials and on-site ads, sponsors will still be able to tap into the buzz online. Moreover, partnership contracts stipulate that the IOC “make good” on an impact to the value of the sponsorship, Rick Burton, the former chief marketing officer of the US Olympic Committee for the 2008 Beijing games, told Quartz.

But some sponsors likely have more to lose than SK-II — particularly global businesses with a smaller Japanese footprint or players that invested in the Olympics through brick-and-mortar activations and travel retail. There’s concern that fewer people will be interested in watching the games, especially if they proceed without an audience — Kantar data revealed that two thirds of US sports fans found events without viewers less enjoyable — meaning fewer eyeballs on brand logos and team uniforms for the likes of Ralph Lauren, Lacoste and The North Face for Team USA, France and South Korea, respectively. 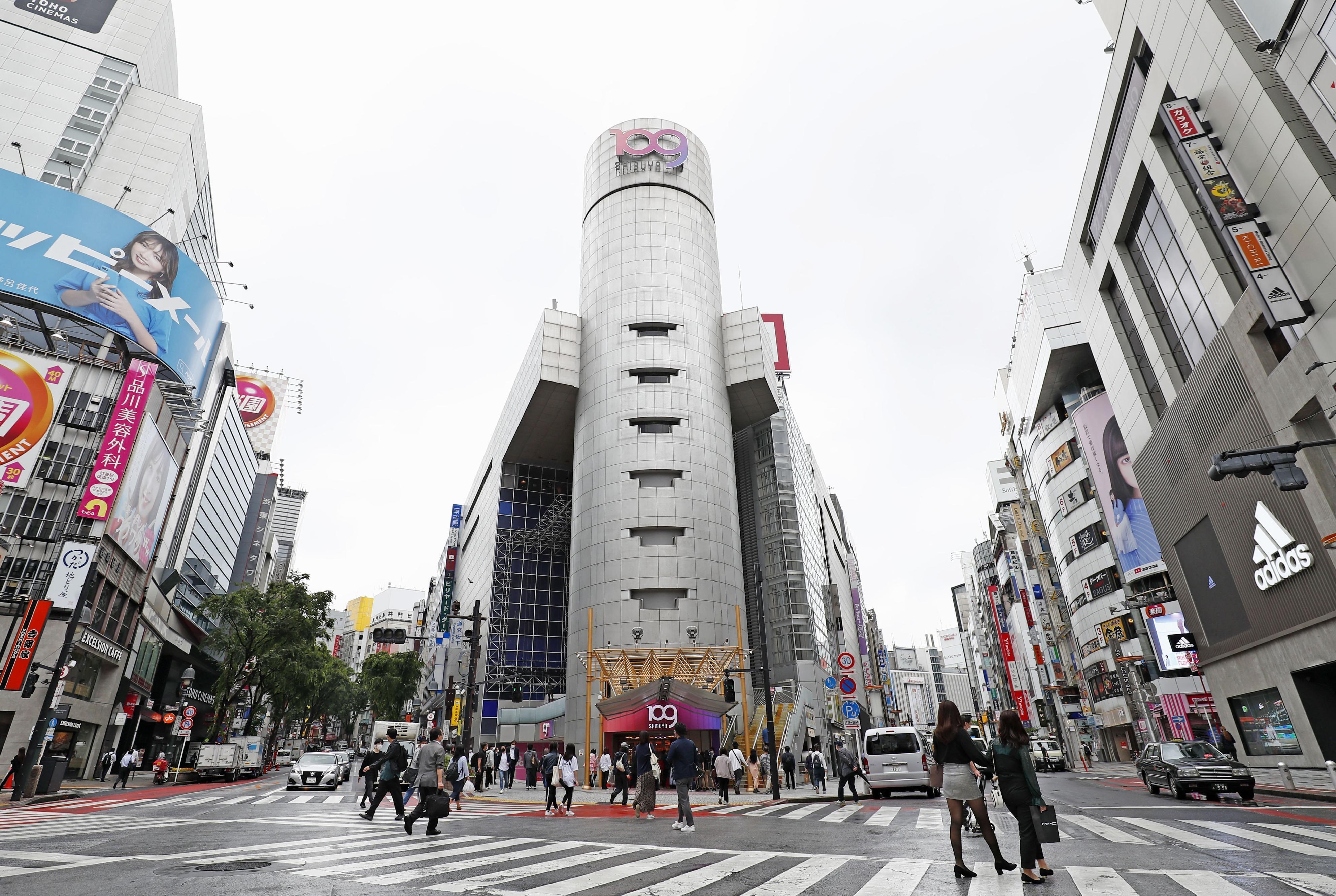 The Shibuya 109 fashion building in Tokyo, which reopened in June 2020 after closing due to the pandemic. Kyodo News via Getty Images.

In the worst-case scenario, sponsors could be caught in the crosshairs if the games do lead to a major outbreak; in April, long-time Olympic partner Toyota’s operating officer Jun Nagata said during an earnings call that company officials felt “conflicted” about their hopes that the Olympics would succeed. “To be honest, we are conflicted every day over what the best course of action is,” he said. According to the Financial Times, Japanese sponsors recently proposed to organisers that the games be postponed to allow for more spectators to attend and thereby protect the value of their investments.

Unlike official event sponsors, local Japanese businesses aren’t protected by contracts with the IOC; many have mixed emotions when it comes to the Games running as planned. Though many welcome the easing of stay-at-home guidelines, a fifth wave of infections could deal a deadly blow to local firms and further delay the much-needed return of tourists from countries like China when regional travel corridors are reopened.

Japan’s retail sales surged 12 percent year-on-year in April, but this was largely due to a comparatively low base from 2020. Department stores in particular have struggled, and fears of yet another recession are mounting.

“Restaurants, and stores and events are counting on the Olympics,” said Kaoru Imajo, director of the Japan Fashion Week Organisation. “[If they’re held], the state of emergency will be called off and people will come out.” The next season of Tokyo’s Rakuten Fashion Week is set to coincide with the Paralympic Games beginning August 24. “We’re hoping that [those games will happen] and that the vaccine will be ready,” he said. The country’s vaccine roll-out, which began in February, has lagged behind other countries — as of June 1, only 3 percent of its population were vaccinated, according to a report by the BBC.

Financially robust multinational brands are far more insulated from a troubled Japanese economy than small and medium-sized local enterprises that “are in a critical situation,” said Hirofumi Kurino, co-founder and special advisor of fashion group United Arrows, who doubts the force of an Olympic-spurred boost where tourists have been taken out of the equation.

Imajo agrees that the country’s retail recovery will only pick up once tourists return, but he estimates that it may take five to 10 years for some harder-hit players to rebound when borders do re-open.

“We can’t even get to the table to talk about the economic effect of the Olympics,” Kurino added, warning that further strain on Japan’s medical system will further impact its economy. “Will this distress be resolved if the Olympics are held? I don’t think so.”

Live Events Are Back. How Big Should Brands Go?