NEW YORK, United States — Rolex’s “Pepsi Jubilee” watch, a stainless steel piece with red and blue colouring around the face, was purchased for around $17,000 in a lightning-fast sale earlier this month.

Potential customers for high-end watches are typically drawn from a small pool that includes hedge fund managers, professional athletes and private collectors. However, this particular Rolex was sold to 134 people, who paid as little as $8.90 for a share of the watch.

The buyers were members of Rally Rd., one of a growing number of apps and websites that enable anyone to own slivers of rare cars, sneakers, skateboard decks, fine art and other items these services dub “cultural investments.”

Almost all of the sites are targeted towards Millennials and Gen Z, the generations that have been quickest to embrace the concept of co-ownership. In fashion, Rent the Runway leads a pack of brands and start-ups offering clothing rentals, while millions of people buy and sell used clothing on platforms like The RealReal and Depop.

Apps like Rally aren’t exclusively devoted to fashion — the most recent auction there was for a Mickey Mantle baseball card — but rare clothing and accessories are frequently put up for sale. The company’s showroom in Manhattan’s Soho neighbourhood has a Birkin bag and a 1970 Rolex Beta 21 on display, among other items. Otis, a rival investment app, is set to offer shares in a pair of sneakers from “The Ten” — a collaboration between Virgil Abloh and Nike — that was also featured in Sotheby’s sneaker auction (the highest bid on the collection was $22,000).

If a car is in a Beyonce video, it’s way more important than a car that isn’t.

Returns on these investments are still largely theoretical; Rally was founded just three years ago, and Otis started in 2018. Art valuations are notoriously volatile, to say nothing of a new pair of Off-White sneakers.

“Our job isn’t to be investment analysts,” said Otis Founder and Chief Executive Michael Karnjanaprakorn. “[Users’] primary motivation is owning a piece of culture. They want to support the artists. The financial side is just like an added bonus.”

For most of these sites, users simply download the app and fill in their personal data along with banking information and wait for a “drop” to purchase shares of a product. All apps offer detailed descriptions of the products including the price, number of shares offered, comparable asset value and certificate of authenticity as well as artist bios and a timeline of the product itself.

Rally and Otis rely on the streetwear model of weekly “drops” to build hype for each sale. Rally also sells related merchandise to give customers a sense of ownership; the Lamborghini aficionado who buys a $150 share in a Countach Turbo may never drive “their” car — or even see it in person — but they will have the option to buy a limited-edition T-shirt and a candle that smells like the car’s leather interior.

“Those sold out immediately,” said Rally Co-Founder Rob Petrozzo. “It brings the whole thing to life a little bit more ... it's a display piece you put in your office or in your apartment ... which then becomes a marketing vehicle."

The site has raised approximately $13 million so far, including a $7 million Series A round last year led by Upfront Ventures, who also has invested in sneaker marketplace Goat as well as ThreadUp. Other Rally investors include Anthemis Group, the rapper Nas and Jeffrey Katzenberg's WndrCO.

The UK- based Feral Horses also offers a multi-tiered system in which artists, or the site itself, offer rewards depending on how many shares users buy. For the sale of a Patrick Hughes’ painting, multiple shares of the work can get users a range of “exclusive” items and experiences, including posters, an invitation to a private party with the artist or a studio visit.

I think it’s very unlikely that this could offer spectacular rates of return.

Otis has started offering exclusive items designed for the app’s users. For one upcoming drop, the designer Jeff Staple curated a selection of rare Nike SB dunks, which the San Francisco-based artist “Fnnch” painted on canvases. Both the shoes and the paintings will be up for sale.

The market for rare sneakers and streetwear items is thriving online at sites like StockX, Goat and Stadium Goods. Staple’s Nike SB Dunk Low, for instance, helped define modern sneaker culture back in 2005 when huge crowds waited to buy a release of just 150 pairs. They sold for $200, but this summer a recent sale of the shoe went for $13,500 on StockX.

Even classic auction houses like Sotheby’s are expanding to streetwear items in a bid to appeal to younger consumers. The auction house recently participated in a partnership with Stadium Goods for a rare sneaker sale, and auctioned rare Supreme items in May. Though sales of such items are relatively new, many younger bidders have a better idea of how much rare clothes or shoes are worth, thanks to sites like StockX and The RealReal.

“There are very few secrets about comparable pricing on anything that you’re buying,” said Frank Everett, sales director of Sotheby’s luxury division. “[Consumers] come with a lot more information and more confidence about what they’re buying.”

That doesn’t mean the small-time buyers purchasing shares on Rally or Otis are likely to make sizable returns, if any. Art, collectables and other rare items are risky investments to begin with — some handbags and rare watches appreciate in value over time, but the vast majority quickly lose value. 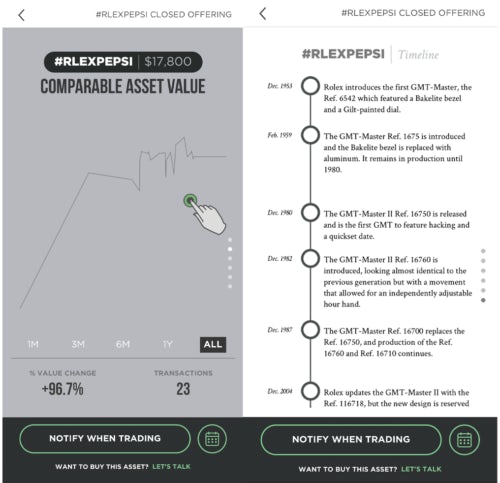 “Some of the items featured on these platforms have seen significant appreciation in recent years, which is perhaps why they were selected,” said Natasha Degen, a professor and chair of art market studies at the Fashion Institute of Technology. “But do we expect to see that over the next five or 10 years? I would say it’s very unlikely.”

While the Sotheby’s auction made headlines after its sneaker sale, 99 out of the 100 shoes were purchased by a single collector, and before the mass buyout, as sites like Vox noted, many of the shoes failed to receive any bids.

So-called fractional investments add an extra layer of danger because it can be difficult for individual shareholders to sell out. Transaction, storage and maintenance costs, along with insurance, can make passion investments like the ones offered on platforms like Rally and Otis even riskier.

“I think it’s very unlikely that this could offer spectacular rates of return,” Degen said.

An item’s value can depend on what it fetched in previous sales and trends in the marketplace, but also its cultural significance.

“If a car is in a Beyonce video, it’s way more important than a car that isn’t,” said Petrozzo.

There’s also the question of provenance. The RealReal recently came under scrutiny for its authentication practises, following reports that counterfeit items had been sold to users. Chief Executive Julie Wainwright responded with an email to customers stating that the second-hand marketplace “strives for perfection, but may not be perfect every single time.”

The site launched an authentication page that shows users profiles of the company’s experts in charge of authenticating items, including their degrees, previous experience and area of specialty.

Rally and Otis said they seek out appraisals by experts in an item’s category and often buy directly from well-known galleries or the artists themselves. For sneakers, Otis said they source from established sellers like Stadium Goods that come with an authentication guarantee. They also rely on a network of authenticators that inspect the shoes in-person.

Many of these sites also have aligned themselves with streetwear products in an attempt to appeal to consumers that are used to buying Supreme skateboard decks they’ll never put wheels on, or hoodies they’ll “flip” for profit.

“The conversation about what we do as a business requires no hand-holding,” said Petrozzo of the site’s primary demographic. “They completely understand what we do.”