As the ex-Vogue editor looks ahead to her legacy, her secret weapon is her son and heir apparent Vladimir Restoin Roitfeld. 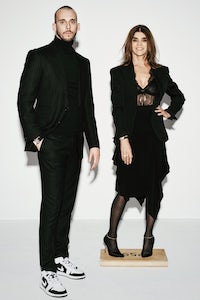 As the ex-Vogue editor looks ahead to her legacy, her secret weapon is her son and heir apparent Vladimir Restoin Roitfeld.

PARIS, France — Carine Roitfeld has been busy. At 64, the French stylist and editor, who has become a global fashion icon and helms the title CR Fashion Book, is launching not one, but seven eponymous fragrances. Later this month, she’ll stage a rock-n-roll themed fashion show for AIDS foundation AmfAR during the Cannes Film Festival, then it’s on to a multi-brand “CR Runway” fashion show in Florence with Italian retailer Luisa Via Roma. Then she'll be off to the debut of a capsule collection for the Karl Lagerfeld label, where she was recently appointed style advisor and will create three collections, which she called the designer’s “last blessing.” 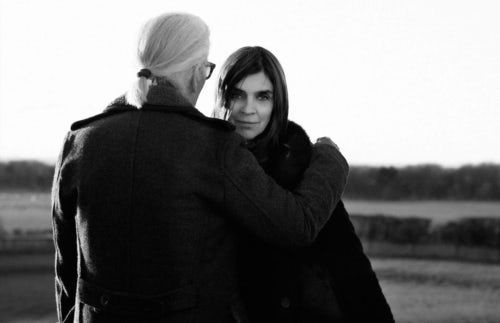 She’s also plotting international editions of CR Fashion Book, while continuing her work as Harper Bazaar’s global fashion editor for the title’s 34 international editions and shooting advertising campaigns for brands from Chanel to Kanye West’s Yeezy. On June 3, the Council of Fashion Designers of America will recognise her with the CFDA Founder's Prize.“You cannot put all your eggs in the same basket,” said the former French Vogue editor, who exited the Condé Nast title in 2011, sitting in her sleek office on Avenue Montaigne, all smoky eyes, bare feet and the perfect posture of a ballet dancer. But there is a common ambition running through much of her recent work: turning her stature in the fashion industry into a bankable consumer brand with longevity and a range of revenue streams ranging from advertising to products.

Her 34-year-old son and business partner Vladimir is her secret weapon. “Without Vladimir, all these wouldn’t exist,” said Roitfeld, who has leaned heavily on her son’s business savvy. “Vladimir understood before me that my name has a value. That we have to protect it no matter what, with the positioning of a luxury brand,” she added.

“She had a huge success long before me, but I have created a very organised structure that allows her to be more efficient and do more things,” said Vladimir Restoin Roitfeld, two weeks before, at Hotel Montalembert on Paris’ Left Bank.

Vladimir understood before me that my name has a value.

“Carine has never wanted an agent,” he added. “She disliked the idea of having someone behind her, to negotiate and sell her. It's always been family style, my father used to take care of it a little bit, but [contracts] have always come in an organic way.”

After spending 15 years as a stylist and writer for Elle France, Carine Roitfeld freelanced for the likes of French Glamour, The Face and American Vogue. In 1990, she met the photographer Mario Testino and they began working together as a team. “And then there was this guy called Tom Ford constantly calling us to work on his first collection for Gucci,” she recalled, referring to one of the most important partnerships of her career.

“At this time Gucci was just a pair of loafers,” she continued. “He called me maybe ten times and one day I said, ‘OK, come to the shoot,’ and when he came, he was so beautiful, so charming and we said OK, not because of the clothes, but because of him.”

Roitfeld worked as a consultant to Tom Ford for six years, first at Gucci and then at Yves Saint Laurent when Ford took the reins in 1999. During these years, she served not only as a stylist but also as the designer’s muse. “She is one of the most inspirational and influential women working and fashion today and as such her thoughts and opinions are always relevant,” said Ford. 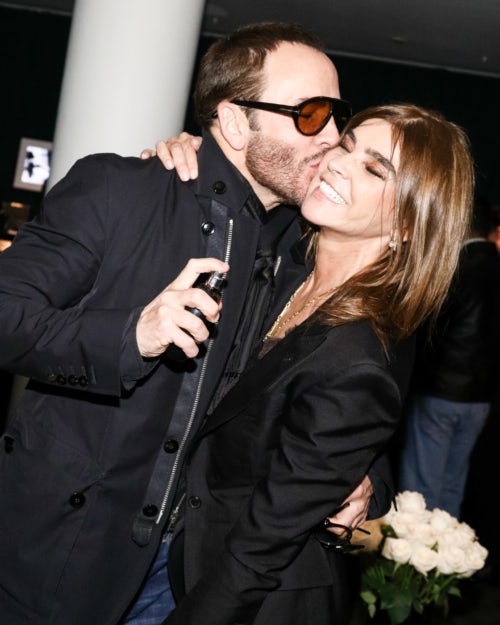 Roitfeld was never afraid of nudity (the posters advertising her new line of fragrances feature the stylist herself sitting completely naked as she looks out a window). Nor controversy. "At Vogue Paris, I styled a fashion story in Marrakech with models wearing veils,” she said. “I also put a black transgender model in miniskirt on a cover.”

At CR Fashion Book — which she launched in 2012 in partnership with friend and publisher Stephen Gan — Roitfeld did it again, putting Halima Aden, a Somali-American model, proudly wearing a hijab, on the cover of the magazine. It was a success. But Roitfeld is wary of today’s watchdog culture, where self-styled social media activists police content deemed culturally offensive. “You can be attacked on anything,” she said.

Vladimir, meanwhile, was dealing art, having set up his own firm in New York, but joined CR Fashion Book in 2016 after his mother’s split with Gan. First, Vladimir deepened Roitfeld’s relationship with Hearst, which owns Harper’s Bazaar, persuading the media giant to launch CR Fashion Book on its digital publishing platform and support the launch of a Japanese edition of the magazine. They are now eyeing new markets including China, Russia and the Middle East. "Carine is a visionary leader. She inspires an audience of millions around the world through her work with CR Fashion Book and as Harper’s Bazaar’s global fashion director," said President of Hearst Magazines Troy Young.

Roitfeld declined to provide traffic statistics for CR Fashion Book’s website, but according to ComScore, Crfashionbook.com had 257,281 unique visitors in April 2019. The circulation of CR Fashion Book’s primary print edition is 65,000, plus 25,000 for the Japanese edition.

Early on, Vladimir also created the second pillar of Roitfeld’s budding brand: CR Studio, which launched in early 2017 and was initially conceived as a production agency powering Roitfeld’s creative collaborations but has since become a talent agency representing the network of creatives around her. Linked to this is Roitfeld’s newest initiative: CR Runway, which on June 13th, will feature 90 looks from 70 designers including Versace, Dior, Balenciaga, Off-White and LaQuan Smith on a Florentine catwalk.

Creating a fragrance is the greatest luxury I’ve ever offered myself in my life; it was my dream.

The third pillar of the business is a line of Carine Roitfeld products, starting with the perfumes, which could be followed by cosmetics, accessories and ready-to-wear, she said. Though the Roitfelds originally sought a licensing partner, the scents were developed independently and debuted on May 6 on Net-a-Porter and CarineRoitfeld.com.

“Creating a fragrance is the greatest luxury I’ve ever offered myself in my life; it was my dream,” said Roitfeld. “I don’t mean to keep my name alive but I would like to pass something on to my children after me. I have worked hard for the legacy of others in the last 30 years, and I was very happy to do it. But, as Vladimir tells me, it is your turn to work for yourself and perfume is something that can last, if it is a commercial success, God willing.”

Both Net-a-Porter and Roitfeld declined to reveal early sales figures and thus far the perfumes are not believed to make up a big part of the business. “Releasing them has already been a victory,” said Vladimir.

Roitfeld has a strong stylistic signature and the building blocks of a strong brand identity against which to sell products. “Her style makes a strong base for a brand DNA,” said Serge Carreira, lecturer in luxury management at Sciences Po Paris. “There’s a market for feminine, sophisticated yet for the daily life clothes; that’s still relevant.”

But it will be challenging for the new perfumes and future accessories and ready-to-wear to break through in a crowded and competitive market, where Roitfeld has a sizable cult following (1.5 million on Instagram) but is not a household name. (In 2015, Roitfeld launched a collaboration with Japanese retail giant Uniqlo, but the resulting product was slow to sell, according to a source, and the tie-up lasted only three seasons). 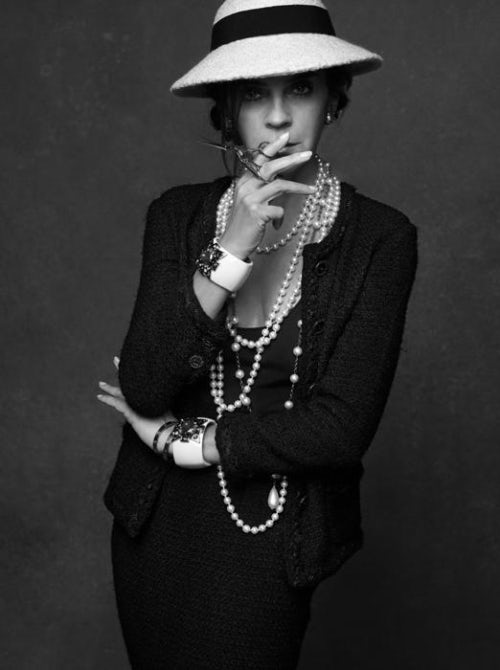 Then there’s the operational machine to build. “Commercial success will mainly depend on the execution of the products, supply chain and distribution,” said Carreira.

In February, CR Fashion Book announced that Roitfeld will be scaling back her duties at the magazine, going from leading editorial to overseeing it. “It was misinterpreted,” she said. “People thought I would step out completely. It’s just that I will do fewer stories to open the door to new talents. It also frees up more time to work on other projects.”

It’s clear that Vladimir is Roitfeld’s heir apparent. He is already president and managing director of CR Fashion Book, chief executive of CR Studio and president and co-founder of the Carine Roitfeld label. “I have known [Vladimir] since he was a boy and it has been a pleasure to watch him grow into a man who embodies the best qualities of his mother and a tremendous work ethic and drive,” said Ford. “He also happens to have inherited her good looks and sense of style.”

In this new phase of her life, Roitfeld, now a grandmother, stays fit with boxing and ballet dancing, she said. She recently made headlines when she said that while she’s not a big drinker, she does indulge in a shot of vodka every day when she gets home. “Actually, I switched to tequila,” she clarifies. “It also makes you more relaxed on the red carpet.”

But when asked about retirement, she’s fast on the draw: “Impossible!”

In the 2013 documentary Mademoiselle C, Christian Restoin, the father of Roitfeld’s children, explained: “Her role model is Gabrielle Chanel who worked very late [re-entering the fashion world at age 70] and she is full of admiration for Karl Lagerfeld who never stopped working.”