Can Fashion Start-Ups Cash In on the Tennis Boom?

For a new wave of tennis-inflected fashion start-ups, success may depend on balancing the energy of the sport’s increasingly inclusive present with the allure of its exclusive past.

Can Fashion Start-Ups Cash In on the Tennis Boom?

For a new wave of tennis-inflected fashion start-ups, success may depend on balancing the energy of the sport’s increasingly inclusive present with the allure of its exclusive past.

Back in 2014, Marguerite Wade launched Full Court Sport with the now-defunct downtown New York retail temple Opening Ceremony. For Wade, a recreational tennis player, birthing her brand was a labour of love, full of ups and downs, but it turned out to be one of the first in a growing wave of fashionable niche tennis lines to hit the market.

By 2016, with the wider activewear market heating up, the still-fledgling Full Court Sport found itself competing with venture-backed darlings like Outdoor Voices. The brand “was running on fumes,” recalls Wade, who used earnings from her day job designing sets for the likes of American Vogue and Marc Jacobs to help keep things afloat. But she didn’t quit and, eventually, got her second wind five years later in the middle of the pandemic.

In 2020, once retired Belgian tennis champion Kim Clijsters, who had been following the brand, asked Wade to design the on-court kit for her US Open comeback. “I was literally floored,” remembers Wade. “This is reaching an incredible player so I think there’s something there,” she remembers thinking to herself. Soon afterwards, Nordstrom picked up the brand. This month, Full Court Sport unveiled an exclusive capsule collection with Net-a-Porter.

But the label isn’t alone. Tennis is very much in fashion and giving rise to a flurry of start-ups.

But Covid-19 gave recreational tennis — typically played outdoors at an acceptable social distance — a decisive boost. Last year, more than 21 million people hit the courts in the US alone (three million of them new players), a 20 percent increase on the year before, according to a study by Sports Marketing Surveys. New racquet sales shot up by 40 percent.

The tennis apparel market is still dominated by the likes of sportswear giants Nike and Adidas. But the new momentum has attracted fast-fashion players from H&M to Aritzia, as well as athleisure start-ups like Rhone and Alala, which have all recently launched tennis collections. It has also powered a wave of more fashionable labels that straddle performance wear and ready-to-wear with price points to match.

“Tennis was the perfect sport you can play while maintaining your social distance and being active,” says Federico Barassi, vice president of menswear for e-tailer Ssense, which carries a number of fashionable tennis-driven labels — from Jacques and Casablanca to new Copenhagen-based line Palmes Tennis Society — alongside Wilson tennis racquets and Roger Federer-backed Swiss performance wear brand On. “We think tennis has a lot of runway within the fashion industry,” adds Barassi. “It’s going to keep growing.” 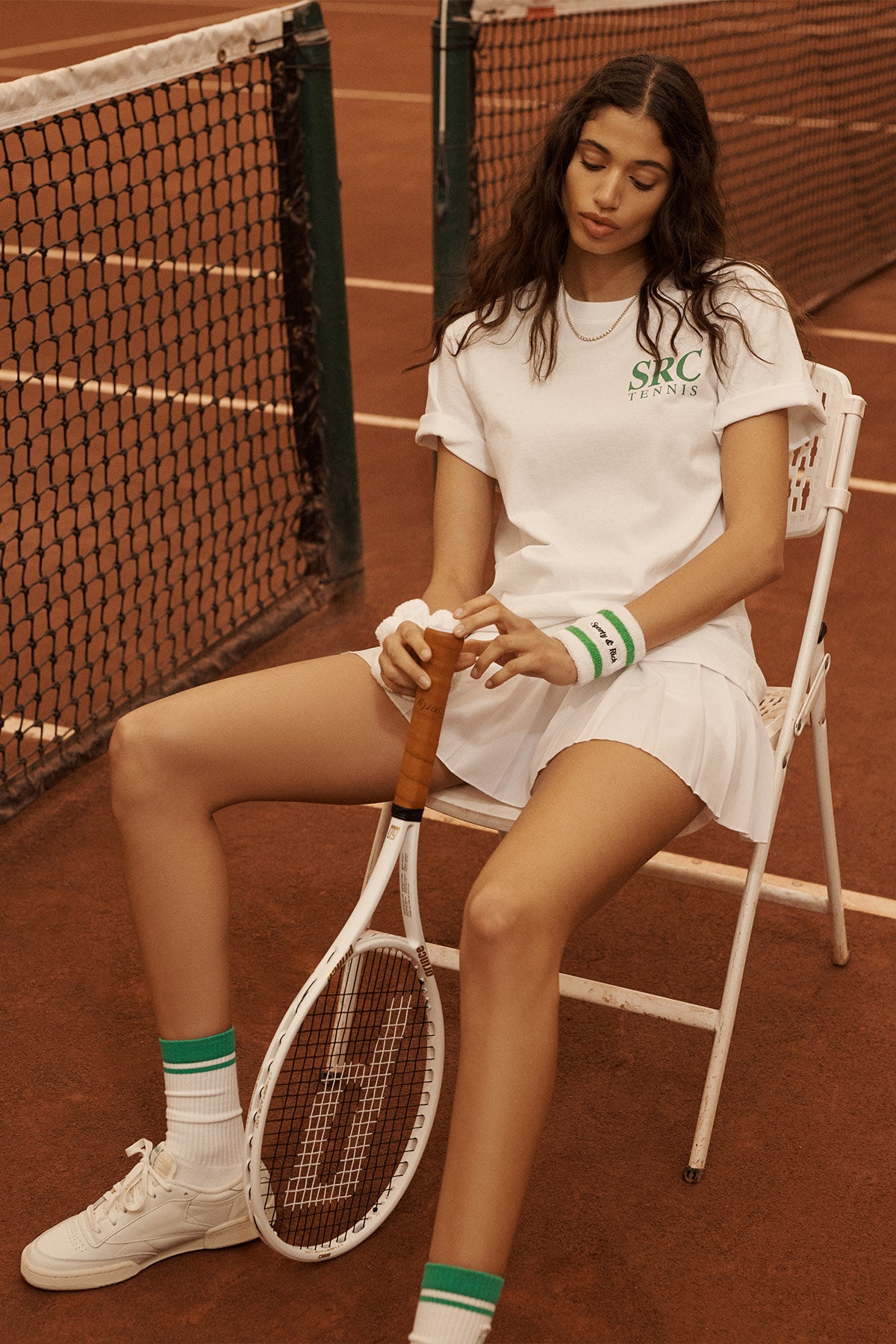 Emily Oberg, former Kith creative lead turned Sporty & Rich founder, unveiled her first tennis collection in May. “We sold out right away within 10 minutes,” says Oberg, who started playing tennis when she moved to Los Angeles from New York four years ago. “Our drops usually sell out, but it takes three to four days. This one was the first one when everything was gone on the first day.” Oberg is set to debut a line of tennis racquets with Prince in December.

“Tennis clothing can lend itself not just a performance wear product but also an off-court product that’s more ready-to-wear,” says Gregg Cohenca, a former collegiate tennis player and founder of Jacques, which launched in 2018. “I think playing in those two lanes is very powerful for a brand because the piece itself could be so versatile.”

Earlier this summer, David Lieske, a Berlin-based artist and an avid tennis player with a penchant for using Prada’s nylon backpack for his racquets, founded the hyper-niche DL Courtwear as a made-to-measure offering of hefty yet supple pique polo shirts, seersucker shorts and striped, monogrammed button-downs that a Wimbledon umpire might wear.

Meanwhile, Brooklyn-based Erick Mathelier, a former competitive tennis player who trained at Prospect Park Tennis Centre and co-founded racquet and clothing brand Furi Sport, which launched last month, wants to strip tennis of its elitist connotations and open up the game to more people, injecting a bit of New York’s street-savvy grit into things along the way.

Palmes Tennis Society, which launched last week, also aims to broaden the scope of tennis. “It’s called Palmes Tennis Society because ‘society’ sounds like it’s open to anyone,” says founder Nikolaj Hansson, a skateboarder as well as a tennis player. “I want Palmes to be this community-based brand.” 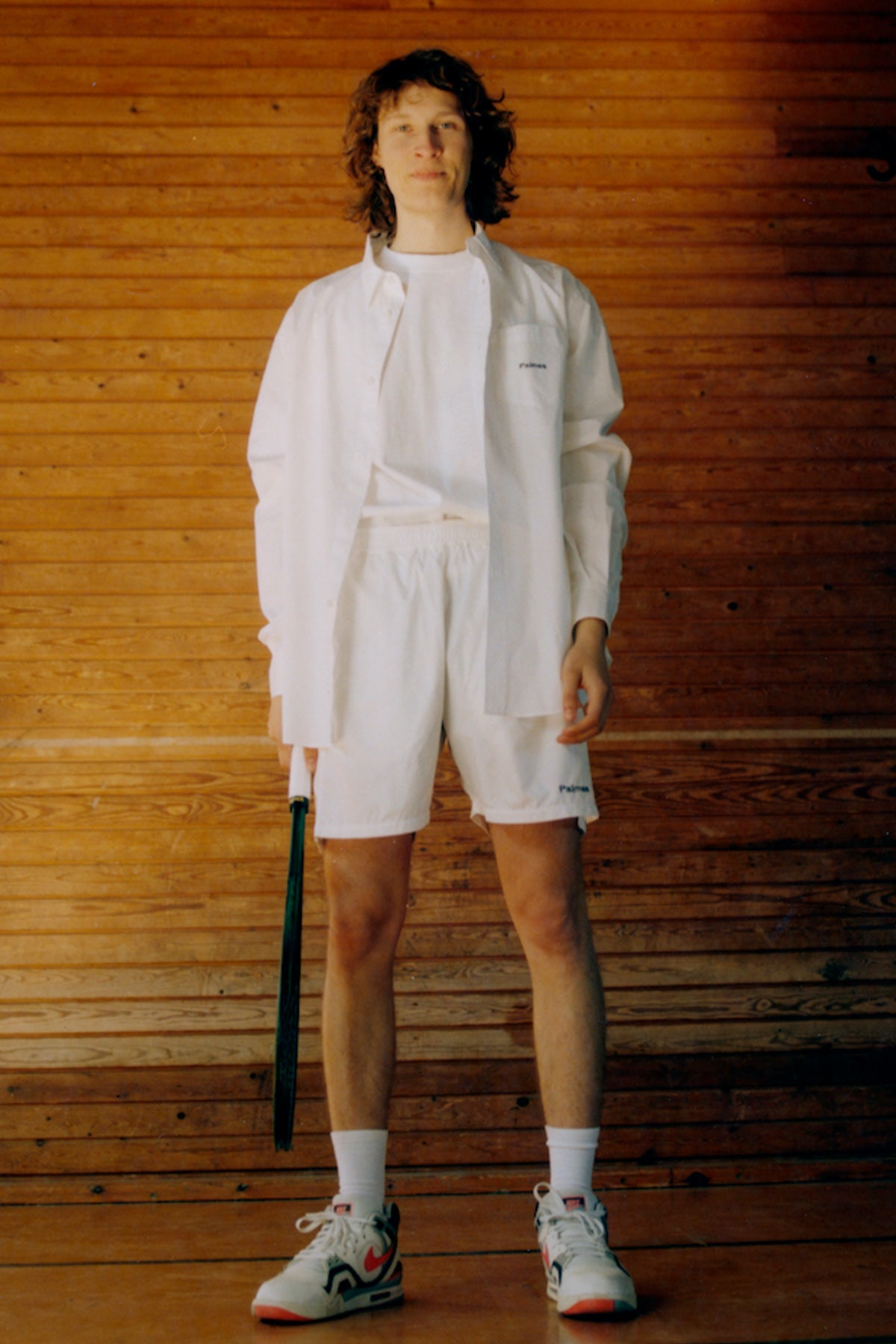 But as tennis opens up to the values of a new generation, part of its fashionability remains rooted in a desire for exclusivity that, at some level, transcends generations. After all, it’s no mistake that Oberg’s label is called Sporty & Rich, no matter how tongue-in-cheek.

“It has a feeling of wealth. It has a feeling of leisure and time. Even for incredibly wealthy people, time is a scarce resource, and the ability to get out and play is a scarce resource,” says Chris Isenberg, the founder and editor-in-chief of hip sports and culture publication Victory Journal. “So I think when you start there [as a fashion brand], it’s a very good starting place because you are signifying things that people want to signify.”

Oberg, who has capitalised on the Waspy, sporty Princess Diana look, agrees. “I think people just kind of like the style of tennis, the idea of it and the lifestyle around it.”

Indeed, for the new wave of tennis-inflected start-ups, success may depend on balancing the energy of the sport’s increasingly inclusive present with the allure of its exclusive past.

But for those who want to get in on the action now, be warned. “I think when people see commercial success around something, they think it’s just doing tennis items and they’ll just put it on the racks — it doesn’t mean it’ll sell,” says Charaf Tajer, the French-Morrocan founder and creative director of Casablanca. “I think it needs a narrative to make sense.”

“In Paris, tennis wasn’t something we necessarily had access to, but the culture of it was an obsession,” adds Tajer. “Casablanca is interesting because we’re playing with codes of tennis, but we make it in a way that nobody intended. It’s this contradiction that makes it special.”

Editor’s Note: This article was revised on 4 August 2021. A previous version of this article referred to Federico Barassi as Freddy Barassi and Erick Mathelier as Eric Mathelier.