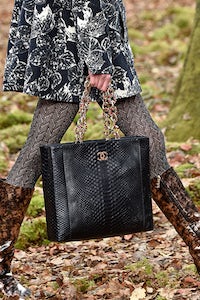 PARIS, France —  Chanel will stop manufacturing products made from snakes, crocodiles, lizards and other exotic skins, the company said Monday, making the Parisian fashion house the largest player in luxury to ban the materials.

Handbags, shoes and clothes made from exotic skins are among the most expensive and coveted luxury products on the market, often commanding enormous premiums — and higher profit margins — over similar products made from other materials. Animal-rights activists have long targeted trade in the materials, where they say abuse of animals is rampant and that many skins are sourced illegally, endangering wild populations.

Chanel said difficulty obtaining responsibly sourced skins was a deciding factor in its decision to stop using exotic skins. The full list includes snakes, crocodilians, lizards and galuchat (stingrays). On its website, Chanel lists dozens of products made from exotic skins. The version of its "Classic" flap handbag made from python skin sells for $10,300, nearly double similar items made from calfskin or tweed.

“We are continually reviewing our supply chains to ensure they meet our expectations of integrity and traceability,” the company said in a statement. “In this context, it is our experience that it is becoming increasingly difficult to source exotic skins which match our ethical standards.”

The decision was unexpected. The campaign against exotic skins has gained less traction than efforts to ban fur, which have spurred dozens of fashion brands to stop selling products made from fox, mink and other animal pelts. Hermès continues to sell crocodile Birkin bags, despite years in the crosshairs of People for the Ethical Treatment of Animals (PETA), which even bought shares in the house to promote its cause. A handful of brands have stopped using exotic skins, including Diane von Furstenberg in October.

"It definitely took us by surprise," said Christina Sewell, PETA's manager of fashion campaigns. She said the organisation had corresponded with Chanel executives about exotic skins since 2015, but hadn't received an indication a course change was coming. She said PETA will be using Chanel's decision to step up its campaign with other luxury companies.

Instead of moving to ban the use of exotic skins, many luxury brands are emphasising their ability to source them ethically, said John Guy, an analyst at MainFirst. Kering, parent of Gucci, Saint Laurent, Balenciaga and other luxury houses, invested in a python farm in Thailand in January 2017, and Hermes and LVMH also operate reptile production facilities. Guy said Kering is closing in on its goal of sourcing 100 percent of its alligator skin ethically.

Sewell said it's impossible to verify that every skin is produced according to ethical standards. In 2015 and 2016, PETA found grim conditions for reptiles supplied to Hermes and LVMH.

"There is no way to say to your consumers you have 'ethical sourcing' of animal derived materials," she said. "If companies are being honest ... they have to acknowledge this is too convoluted a supply chain."

Luca Solca, head of luxury goods at BNP Exane Paribas, called Chanel’s announcement a “bold move,” reflecting a shift in values by the company’s younger customers. Many millennial and Gen-Z luxury consumers say they prefer to buy products that are ethically sourced and have minimal environmental impact, even if their purchases don't always reflect that.

Unlike faux-fur, which is sometimes viewed as cheap or environmentally unfriendly because it is typically made of plastic, there is less of a stigma associated with faux-snakeskin and crocodile products because they are often still made of real leather.

Chanel’s move is unlikely to have a major impact on its bottom line, analysts said. Exotic skins likely made up a share of total sales in the “high single digits,” Guy said. In its statement, Chanel said it was working to “create a new generation of high-end products” using different materials.

And with no more python bags on the horizon, their value in the resale market is likely to soar.

“I’m sure Chanel’s 2018 alligator collection will be highly sought after now," Guy said.