LONDON, United Kingdom — Brexit might be dominating the headlines as a possible no-deal looms large over business, but the threat has yet to dent luxury goods consumption in the UK. The pound is historically weak and that means there are deals to be had for luxury shoppers.

And as international tourists and ultra high-net-worth Londoners (many of them with foreign wealth) continue to spend, luxury brands are also continuing to open new stores in prime central London locations, notably on Bond Street and surrounding locations in Mayfair, as well as the affluent West London district of Chelsea.

Real estate agent Savills, which handles the majority of deals on Bond street, forecasts the number of international luxury brands opening their first-ever store in London this year will outpace 2017. Richemont-owned Alaïa opened a major flagship on Bond Street earlier this year. New stores on Bond Street by Loewe, Givenchy, Alexander McQueen and Roger Vivier are in the works and Italian outerwear brand Herno has just agreed a £1.2 million a year Bond Street rental. Major refurbishments are also underway at Cartier and Louis Vuitton’s Bond Street flagships. Several real estate and fashion industry sources have told BoF that LVMH is looking to buy three buildings on Grafton Street in the heart of Mayfair, to be turned into a "very important corner," contingent on Westminster Council agreeing planning permission. The deal could be valued at up to half a billion pounds, one source estimated. LVMH declined to comment.

“We feel Bond Street is a bullet-proof market to a point. It is unique in that there is low availability and huge demand, so you create a competitive market all the time. One thing that will certainly happen is [brands] will open fewer stores so the ones they do open have to be more important and if you have one store in a luxe pitch in London you go to one location,” says Anthony Selwyn, head of London and international retail at Savills. “There are 15 or 20 brands looking to come [to Bond Street]. It all points back to the depth of the luxury sector itself. The spend has become broader; it’s multinational.”

It’s difficult to bet against world capitals such as New York City and London.

It’s somewhat counterintuitive given Britain’s current collision course with a seemingly existential reckoning as the full impact of a possible no-deal exit from the European Union weighs on the business sector and dampens consumer confidence. Overall sales in London’s West End shopping district fell 3.4 percent in September, the third month of declines, according to the New West End Company, the trade group representing businesses on Bond Street and nearby Regent Street and Oxford Street, which cater to a more mass-market demographic. Yet executives say luxury is relatively immune and chief executives are taking a long-term bet on London, investing in a market where high-end tourism and its position as a top spot for global brand exposure is set to continue unabated.

Givenchy is a case in point. In mid-December, the brand, currently undergoing a renaissance under British-born designer Clare Waight Keller, is opening its first London flagship on a prime corner block that spreads across Bond Street, Grafton Street and Albemarle Street. The brand has taken out a long lease on the space, where special edition products are planned for the opening. The French brand, owned by French luxury conglomerate LVMH, is particularly bullish about the UK. When it launched its e-commerce platform in Europe in March, the UK was its top country in just weeks, no doubt boosted by Keller’s royal wedding coup later in the year.

“[Brexit] it’s out of our control. There will be some consequences and everyone will be responsible to face those but what we can control is, the London market is very vibrant, it is a world market, it has a combination of trends, it dictates trends, you have an interesting creative community that is nourishing, which for me has to be respected and developed regardless of Brexit,” says Givenchy’s chief executive Philippe Fortunato. Plus, London is “a world city in terms of clientelling,” he adds. “You have the best clients from all over the world. You have people shopping from the Middle East, Asia, and the US, of course. People come to London to have amazing retail experiences. I was in London a few days ago — you can feel the energy, the city is very vibrant.” 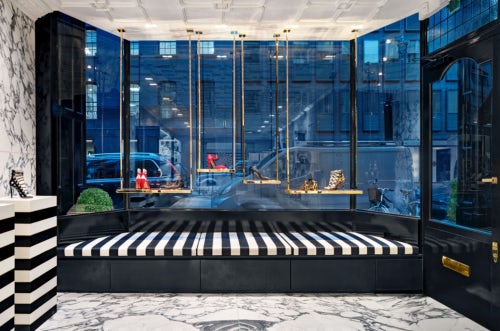 Brexit gave Thom Browne a negotiating boost when the American brand signed the lease for its first store on Albemarle Street in Mayfair in early 2017, less than a year after the referendum. “We saw this moment as a great opportunity to invest in London and secure a great location — and with the right conditions,” says Thom Browne chief executive Rodrigo Bazan. “We believe in London as one of the world capitals and how significant it will remain for both tourism and local clients, which we knew we already had. At present, it’s difficult to bet against world capitals such as New York City and London.”

And indeed, prime rents on New York’s Fifth Avenue (between 49th Street and 60th Street) are still the highest in the world at $3,200 per square foot in the third quarter of this year, followed by Hong Kong central and London’s Bond Street, according to data on the third quarter of 2018 provided by Savills. That’s followed by Milan’s Via Monte Napoleone, Tokyo’s Ginza district and Avenue Montaigne in Paris.

Analysts are sanguine about Brexit’s impact on luxury. “The only real implication is how supply chain will be managed — initially, I expect brands will keep extra inventory in the UK, just in case,” says Luca Solca, head of luxury goods at Exane BNP Paribas, to counter possible custom control overloads as they shift over to new processes. “As far as shops and consumer demand are concerned, there is no issue. On the contrary, we may see a surge as EU citizens should be able to buy tax free.”

At the Global Blue VIP lounge on Albemarle Street, a short walk from Bond Street, international shoppers are offered Perrier Jouet champagne or Fortnum & Mason tea and biscuits as they come to claim back their 20 percent value-added tax. Shoppers can even get cash in hand or money on their mobile wallet, a plus for Chinese shoppers, the biggest visitor group to the lounge, followed by Americans, Australians, Japanese and Canadians. The average transaction of guests is £735 ($953).

It all points back to the depth of the luxury sector itself. The spend has become broader; it’s multinational.

Luxury shoe and lifestyle brand Aquazurra has its London flagship on the street, one of the brand’s top performing stores worldwide. “I think London will always remain an important shopping destination as it's still one of the world’s top capitals regardless of Brexit,” says co-founder and creative director Edgardo Osorio. “We have had continued success and double-digit growth in the boutique and don’t expect that to stop after Brexit.”

In neighbouring Soho, where bars and nightclubs mix with streetwear stores, boutiques and film industry offices, Swedish label Eytys opened its first London store in early September. “The reception has been really good. We launched denim in the same week and its interesting we used to be considered more a footwear brand but actually London has driven our range to denim and ready-to-wear,” says co-founder Jonathan Hirschfeld. “The higher spending customer are a lot of Chinese customers, new international customers like Chinese, Korean and, of course, the local London crowd.”

London will always remain an important shopping destination as its still one of the world’s top capitals regardless of Brexit.

But Brexit does have some real implications for luxury retailers. A limit on the free flow of EU nationals, many of whom staff luxury stores and their headquarters, could have a material impact, according to Helen Brocklebank, chief executive of British luxury brand trade body Walpole. “90 percent of UK luxury brands employ non-UK EU nationals in their business and for many companies almost 40 percent of their workforce are EU citizens. Changes to free movement of people will have a considerable impact on both daily operations and the sector’s ability to attract top talent, as well as the creative and cultural diversity of teams,” Brocklebank says.

Another concern is the likely changes to customs and tariffs. Take for example a British brand that imports raw material from the EU, say Italian fabric, and then exports it back to Europe, to sell as a finished product. They face a double customs tariffs, and delays in deliveries. “Customs and border documentation could potentially cost companies millions — some of the very top end luxury stores estimate the cost of the documentation and administration will be close to £10 million extra a year,” she says.

The uncertainty did not stop Italian fashionable label MSGM from opening its first store in London in July: a two-storey flagship in South Kensington replete with Venetian terrazzo, cement walls and art-based plant installations.

“No one exactly knows what will happen with Brexit. No one can predict if it will be a hard or soft landing. In any case, the effects will be clear only in the midterm,” says MSGM’s chief executive Roberta Benaglia. “MSGM is convinced that London will maintain its relevance in the years to come and particularly in this moment it was important to demonstrate to London all the love the city deserves.”

“I’m quite bullish,” says Givenchy’s Fortunato. “When it comes to talking to my super-affluent customers, they really see a strong appeal to Europe; Paris, Milan and London. These cities have provenance, culture, heritage, modernity, education, financial stability and for me the story and the experience around these cities are very important. I think London will be going through some ups and downs, but mid to long-term we are quite optimistic.”