According to the report, Inditex, H&M, Fast Retailing and Benetton are among the big fashion companies leading the way in hazardous chemical management.

AMSTERDAM, Netherlands — The fashion industry has made progress toward purging its supply chain of hazardous chemicals, Greenpeace said in a new report. Luxury brands, however, are lagging behind.

Greenpeace is pushing to end the use of hazardous chemicals in the fashion supply chain and its products by 2020, a process it calls “detoxing.” In its report, reflecting on the seven-year-old campaign, the organisation said it had seen a positive shift in the clothing industry's approach to the chemicals it uses.

“We were really asking brands to take responsibility for the whole production, the whole supply chain, instead of just focusing on the finished products,” said Kirsten Brodde, co-author of the Detox Report. “Looking at the supply chain, this is something where now I would say the fashion industry is leading the way and showing others how to do it.” 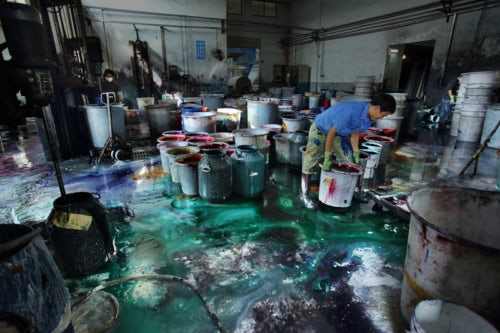 Over the course of the campaign, Greenpeace has signed on 80 apparel companies to “detox” by 2020, including sportswear brands such as Puma, Nike and Adidas, fast-fashion giants including Primark and H&M, as well as outdoor brands, suppliers and denim brands including Levi’s and G-Star Raw.

Almost all detox-committed brands have moved towards greater transparency by implementing regular water-waste testing and disclosing the results. In addition, 72 percent of brands either already publish or have committed to publishing an extended list of suppliers to include wet processing suppliers (typically washing and dying) lower down the supply chain.

Only two luxury houses — Burberry and Valentino — are among the detox-committed brands. Brodde said that the luxury sector’s unwillingness to commit to detoxing came as a surprise to her and her team, who expected fast-fashion companies to be more resistant.

“We really put a lot of effort into perforating all the luxury brands to commit to detox, and they didn’t,” she said.

According to the report, fast-fashion giants Inditex, H&M and Uniqlo-owner Fast Retailing were among the companies leading the way, as was Benetton.

Greenpeace had more luck with suppliers, including the Italian Detox Consortium in Italy and Utenos in Lithuania. Suppliers have also helped reduce the use of hazardous chemicals in the luxury sector, even if high-end brands haven't committed to the campaign.

“We had a regional commitment of all suppliers based in Prato in Italy,” she said, noting that it was the first commitment of this kind. “The suppliers committed to detox, but the luxury brands didn’t.”

Policy could really level the playing field now and really enforce some kind of due diligence.

Nevertheless, the organisation is pleased with the progress of the brands that have pledged to detox their supply chains have made.

“The Detox companies are well on their way to destination zero,” said Brodde. “We can see they are able to change.”

Zara-owner Inditex, which committed to detoxing in 2012, says collaboration has been crucial to detoxing its supply chain. “Fashion retail is a highly fragmented industry,” said Felix Poza, director of sustainability at Inditex. “We have to join forces to effectively influence the chemical and manufacturing industry to move faster towards best practice in the supply chain.”

Beyond brands and suppliers, Brodde hopes that policy makers will also pick up Greenpeace’s demands to help reach the 2020 goals. “Policy could really level the playing field now and really enforce some kind of due diligence, making corporations legally responsible for their supply chains wherever they produce in the world.”