The LVMH-owned Spanish heritage house is opening a new London flagship to make room for growth under Jonathan Anderson.

LONDON, United Kingdom — Bond Street, one of London’s prime luxury locations, is about to play host to another LVMH maison. Spanish heritage brand Loewe is moving its London flagship there to cater to its burgeoning ready-to-wear business.

The brand has undergone a revival under Jonathan Anderson, who joined in 2013 and reconfigured brand codes for a millennial audience, including a string of successful handbags and a growing womenswear business. The brand most recently renovated its Casa Loewe flagship in Madrid, as part of its introduction of curated global “hubs.”

Loewe’s old store on Mount Street was small for a major fashion capital, and the new space will provide room to properly showcase clothes and accessories, as well as host an art programme and pop-ups.

We’re turning most of our freestanding stores from small accessory-focused stores into a full offer.

“Ready to wear is not a baby anymore, but a toddler, and we’ve had an ambition to turn it into a proper business since Jonathan joined [but it] has been taking off for good in the last two years,” said Loewe chief executive Pascale Lepoivre. “We’re turning most of our freestanding stores from small accessory-focused stores into a full offer.”

Further investments into stores and extensions of the brandare to be expected, said Mario Ortelli, who runs a London-based advisory firm on luxury strategy, since “collections and leather goods are getting good traction with the consumers, and LVMH is investing in this maison to exploit its positive brand momentum.”

Loewe’s new store spreads across three floors of womenswear and menswear, with the first floor hosting a shifting series of installations as part of Loewe’s art collection, as well as a pop-up space to display capsule collections, most recently Paula’s Ibiza collection. 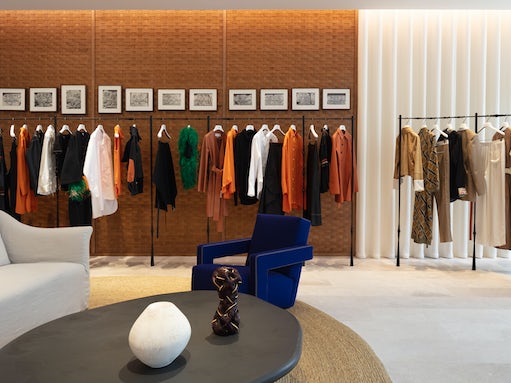 Inside the new Loewe store on Bond Street | Source: Courtesy

The new store also marks a bet on London despite Brexit uncertainty, which is yet to dent luxury, as international tourists and ultra-high-net-worth Londoners continue to spend.

“[The outcome of] Brexit is uncertain, but whatever form it takes we’ll still adapt to it,” said Lepoivre. “The city will never cease to be a world-class centre for fashion.”

The move to Bond Street comes as luxury brands increasingly place their bets on this affluent area of London. In 2018, Cartier and Loewe began major refurbishments in their stores, while earlier this year LVMH announced plans to open a hotel, spa, restaurants and a flagship store that appears intended for Hedi Slimane’s Celine on a stretch of Grafton Street that extends from Dover Street to Bond Street, in a project that — if approved — would neighbour LVMH’s new Givenchy store that opened in late 2018.

“The small location in Mount Street was appropriate for a niche brand with a not so wide offer portfolio,” said Ortelli, adding that the larger store with higher traffic and footfall will “give Loewe the opportunity to showcase a larger product portfolio to a broader public.”