LONDON, United Kingdom — Head north up the coast of California from Santa Barbara and after 90 minutes, you’ll hit Pismo Beach, with its distinctive pier jutting out into the Pacific. The town is known as the Clam Capital of the World, though its more lasting claim to pop fame was as the destination Bugs Bunny never reached when he took a wrong left turn at Albuquerque. Now, Pismo Beach has another feather in its cap. In June, local son Matthew M. Williams was appointed creative director of Givenchy, one of the grand old names of French fashion. And, on Sunday, he’s set to debut his first collections of menswear and womenswear for the house.

From Pismo Beach to Paris, France: for Williams, the arc has curved smoothly, unwaveringly ever upwards. It wasn’t even like he was a particularly unusual child, but when he was skating on the boardwalk with his friends, doing Californian kid things, it was fashion and clothes he was thinking about. “I dreamed of working for a legendary fashion house in Paris,” Williams says. “I felt it was my calling, the only thing I ever wanted to do.” 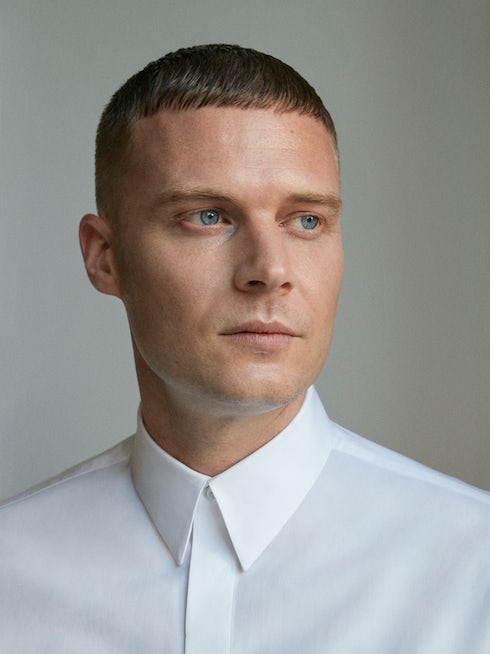 He took one semester of art classes at the University of California, but he never pursued any formal fashion training. In fact, when he applied to study at Parsons School of Design in New York, he was rejected. No mind. “I taught myself, looking at magazines, understanding fashion photography. Remember those collections issues of L’Officiel that cost about $100? I couldn’t afford them, so I’d read them at the magazine shop in Little Tokyo, in LA. John Galliano at Dior, Alexander McQueen at Givenchy, Tom Ford at Gucci, Marc Jacobs at Vuitton… I always wondered about their journey. And how did those Americans get there? I knew I had to go.”

The first watershed moment was leaving Pismo Beach for Santa Barbara, then LA. Then, New York. Williams was a design gun for hire when he met Lady Gaga in a restaurant. This was before “The Fame” — and the fame. They became a couple; he made her costumes. He remembers it as an incredible education. “At 22, 23, I was working with costume design houses in LA, working on shoots with legendary photographers, touching these incredible clothes… But I was just amplifying ideas she already had.”

I want to be somebody that moves the conversation forward.

When Williams left Gaga, he worked with Kanye West. During that time, he was also involved with the streetwear concept Been Trill, with Virgil Abloh and Heron Preston. He insists now that the “streetwear” label that many have applied to him has always been misplaced. He proved as much in 2015 when he launched his own label Alyx with the help of his then-wife Jennifer, the company's first sales director. He named it for their eldest daughter. They moved from New York to Ferrara in Italy to dedicate themselves to their business and be closer to both key suppliers and co-founder Luca Benini. “When I talk about the sacrifice and the whole journey, being really nomadic was a part of that,” Williams says now.

“My 20s were defining my taste, making mistakes,” he continues. “It was the same process with Alyx, collection after collection, trial and error, honing in on what I was passionate about.” Another huge watershed was taking Alyx (or “1017 Alyx 9SM” as it is now formally known, to the joy of numerologists everywhere) to Paris Fashion Week two years ago, when the clothes moved from lookbook to runway. The precise focus of those shows was striking from the very beginning. “A 360-degree view of fashion,” he calls it. “It encompassed photography, music, the show as a form of performance. Then it lived in the real world.” 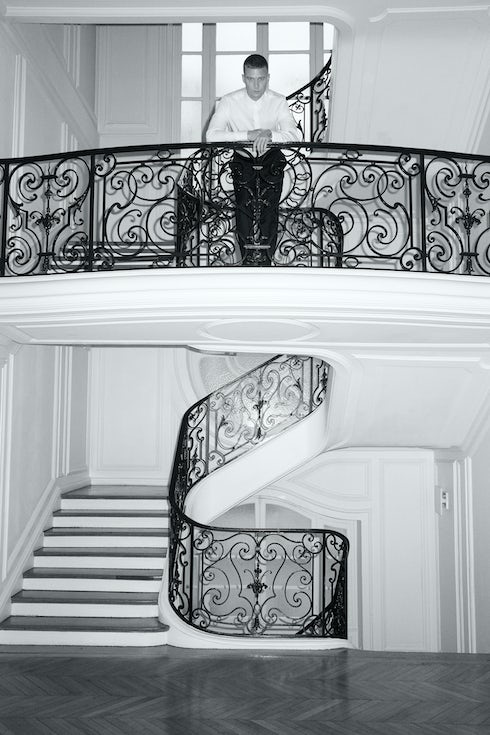 Then, the fabric research, the cut, the silhouette, the hardware, the effort to, as he put it, “develop a design language and codes that are part of a new era,” set Williams apart from his peers. I’m imagining Alyx’s hard, precise, chic edge as a precursor to his Givenchy, and I can only see that edge enhanced by the technical skills Givenchy’s ateliers will provide.

There is something quite distinct about designers from the West Coast, whether it’s Rudi Gernreich or James Galanos or Rick Owens. It could be as fundamental as a perennial outsider’s point of view. Williams thinks it’s for others to decide how, or whether, he fits. Still, he admits, “I didn’t understand the uniqueness of LA till I left. Maybe something all those designers have in common is looking at fashion from afar and wanting to be part of it.” I’d suggest it might the exact opposite. The distance fosters a very particular originality which, proudly, isn’t part of anything, Gernreich, whom Williams admires, being a case in point.

When we Zoom, he’s been on the job 60 days, and he’s featuring a new look: short black hair and bangs. It reminds me a bit of one of Audrey Hepburn’s Left Bank beatnik friends in “Funny Face,” which makes it Givenchy-friendly given that Hepburn was the aristocratic Hubert de Givenchy’s most famous client and reigning muse. The relationship between Hepburn and Hubert is one of the enduring pairings in fashion history. It left a legacy that posed a challenge for everyone who followed him at the house after his retirement in 1995: Galliano, McQueen, Julien McDonald, Riccardo Tisci and, most recently, Clare Waight Keller. 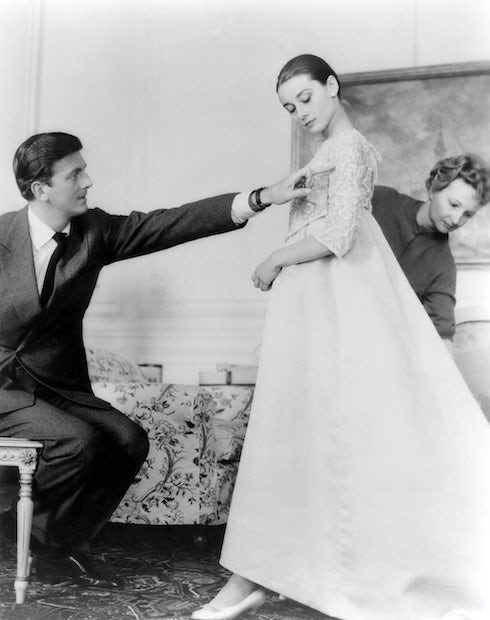 But then, they have all left some mark on the house as well, which might add to the weight of legacy if one was inclined to feel it. Williams says he doesn’t. He claims it wasn’t until Tisci took over that he really became aware of Givenchy, even more so when he was working with Kanye, a close friend of Tisci's. But when your entire life has been fuelled by the dream of taking the reins at a real, live couture house, you’re obviously going to make the most of the opportunity when the dream comes true. So, Williams has been deep diving into the archives, studying the vintage couture, poring over the ephemera. “I love Hubert’s sketches, and handwritten notes about clients. ‘So-and-so forgot to pick up a hat’… that sort of thing.” He’s also been absorbing Hubert’s codes: the tension between the luxe and the humble, the artful use of monochrome, the emphasis on the shoulder. “It takes me back to my time making costumes,” says Williams. “They didn’t have to be commercialised. It was one person, one dress, one moment.”

“I believe fashion needs to be a reflection of what it means to live today, to be modern and relevant.” Williams is musing on what he’d like to bring to Givenchy, which generated around €1 billion for parent company LVMH in 2019, across the fashion house and Parfums Givenchy business, according to analyst estimates. (LVMH does not break out financial results by brand).

“I want to be somebody that moves the conversation forward,” he says. At Alyx, there has been a clear commitment to solutions: fabric and technical innovation, sustainability, inclusivity. “There’s an inclusivity to the clothes I make,” Williams agrees. “A teenager can find pieces in the collection. The menswear is things I would wear. I feel very connected. I remember going to a talk that the artist Luc Tuymans gave. He was talking about the immediacy when a child looks at a painting. For my work, I always want to feel a beat skip in my heart, especially for womenswear. I still want to feel that immediate emotion when I look at something. And I do want to use this platform to effect positive change in the industry and in the world. There are elements of sustainability that can be new pillars of luxury. It’s much more luxurious to drive a really great electric car than a fancy car that uses gasoline.”

There’s an inclusivity to the clothes I make… a teenager can find pieces in the collection.

Commuting between Givenchy in Paris and Alyx in Milan, Williams will be altogether responsible for around 20 collections of menswear, womenswear and accessories per year (at some point, there will be Givenchy haute couture collections, too). This sounds incompatible with the whole idea of the more human reset that wishful thinkers have been talking about in the wake of the pandemic. “Alyx is my baby, it’s hard to stop doing that,” Williams counters. “Where there’s a will, there’s a way.” But if Alyx is his baby, where does Givenchy sit? There’s a beat before he answers, emphatically, “Givenchy is my new baby. I love this house so much.”

With his close friends Virgil Abloh at Vuitton and Kim Jones at Dior, and now Fendi, Williams completes a new LVMH triumvirate, a potent changing of the guard. “It’s inevitable,” he says. “It’s the natural order that one generation takes over from another.” In two weeks, Williams turns 35. Even with his young determinist streak, he resists the crystal ball. “I don’t like to make predictions. I make clothes I like and am inspired by. And I don’t stop to think about challenges. I just wake up in the morning and go. I try to be as present as possible in today. There’s always another mountain.”

Then, to my undying delight, he quotes Cat Stevens! “There’s a cool lyric from the song ‘Father and Son.’ ‘You’ll still be here tomorrow but your dreams may not.’ How fortunate I'm still here, and so is my dream.” Pismo Beach to Paris? The world’s his oyster. Or is it his clam?

Editor's Note: This article was amended on 1 October 2020. A previous version of this article misstated that Matthew Williams worked for Los Angeles retailer Maxfield’s. He did not.