As the shift to digital eats into print advertising revenues, more magazines are doing what was once unthinkable: turning their front covers into advertising. 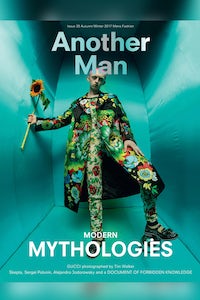 As the shift to digital eats into print advertising revenues, more magazines are doing what was once unthinkable: turning their front covers into advertising.

LONDON, United Kingdom — The latest cover of Dazed & Confused shows Adwoa Aboah in a single-brand look: a Burberry check cap and similarly patterned plastic, hooded cagoule, both straight off the brand’s catwalk. Similarly, one of the fours covers of the Autumn/Winter 2018 issue of sister publication AnOther features a suited model in head-to-toe Gucci.

Burberry and Gucci declined to comment, as did Dazed Media, the independent publisher of both magazines. But both covers appear to have been paid advertisements, sold as part of wider partnership packages.

It wouldn’t be the first example of fashion magazines doing what was once unthinkable: turning their front covers into ads. As far back as 2014 major publishing companies from Time Inc to Hearst Magazines have been experimenting with cover advertisements.

While these placements rarely appear on standard rate cards, they do command a “significant premium” over other high profile advertising placements like the back cover and the page opposite the table of contents, according to Duncan Chater, chief brand officer at Hearst Magazines UK.

One magazine that took the plunge early was Hearst title Marie Claire (US) which, in 2014, featured a special denim zipper subscribers-only cover as part of an advertising partnership with Guess. Readers were enticed to pull open a paper zipper to reveal the magazine’s cover, as well as the Guess logo on the inside panels of the exterior sleeve.

Hearst has also been working with big advertisers in the UK, like Samsung, to produce tailor-made cover ads. The cover of the August 2015 issue of Harper’s Bazaar UK featured a paid-for image of a model holding a Samsung Galaxy S6 edge phone (the cover story discussed the rise of technology in the fashion front row). Thanks to the unconventional ad, the issue was the most “commercially successful” issue of the year, according to Chater.

As advertisers follow consumers online, reallocating more and more of their advertising budgets to digital, print magazines are under pressure to perform. PwC forecasts consumer magazine revenues from print advertising will decline to 6.7 billion in the US by 2021, down from 13.6 billion in 2012.

But covers ads, while lucrative, come with risk to editorial integrity and the long-term brand equity of media titles. “In the past it has been a real taboo,” says Chater. “That said, as a company, we want to be really brave, we’re always looking for things to do differently. What we don’t want to do is damage our brand integrity, we need to keep the environment right and real for our readers,” he adds, adding the Samsung placement was “subtle.”

“This would’ve been unthinkable a number of years ago but it’s become such a lucrative option and clearly a very potent one from the perspective of the advertisers to be so visible and so memorable,” says Douglas McCabe, chief executive of Enders Analysis, a media research group.

“There is a long-term risk to these things, the independence of the media brand is more likely to be tarnished even if subliminally consumers associate media brands with advertising,” he continues. “In many ways the media brands in a position not to do that, and invest in their independence, will do better in the long term.”

“It is innovative but what it tells you is, in order to sustain business to business advertising, they are having to make sacrifices and difficult decisions.”