LONDON, United Kingdom — Oh to be a fly on the wall. It's an expression we hear often, but not until last week, when Bronwyn Cosgrave, chairperson of the Dorchester Collection Fashion Prize invited me to sit in on the confidential judging session, did I get to see what this means in practice. Watching, observing...but saying nothing.

This was no ordinary panel. Take one part legendary shoe designer and another part uber-milliner (Mr. Manolo Blahnik and Mr. Stephen Jones, OBE) and throw in a fashion icon (The Honourable Ms. Daphne Guinness) with a former supermodel (Yasmin Lebon), all powerful editors (Elizabeth Saltzman and Gianluca Longo) and one of London's longest reigning star fashion designers (Giles Deacon) and you have possibly the most influential fashion jury ever assembled in one place to pick out the five semi-finalists who could be amongst fashion's future superstars.

It was an intimate affair that took place, naturally, at the Dorchester Hotel and there was all sorts of behind-the-scenes moving and shaking that BoF can exclusively reveal today. It was a certainly a challenge to remain a 'fly' and not say anything, but it was also fascinating to observe how the ultimate semi-finalist names emerged from an extremely talented pack of young designers.

The ceremonies commenced after Bronwyn finally managed to bring this loquacious lot to order (easier said than done!), asking each of the judges to name their top ten picks from the 69 applications that had been received for this, the inaugural year of the Dorchester Collection Fashion Prize, starting with her own picks.

As judge by judge each began to name their favourites, a few patterns emerged. While each judge would have a few names that didn't come up elsewhere, there were a few names that came up over and over again. It was pretty clear that a few of these would make it straight to the shortlist. However, filling out the rest of the names would require strong lobbying and passionate pleas from those judges who could best make the case for why someone should be shortlisted. This is why they say, 'the squeaky wheel, gets the grease.'

The judges debated many countervailing issues. Should the semi-finalist reflect a balance between different product categories, or simply the best talent, regardless of which segment they operated in? How important was it that they had the right stockists? What were they planning to do with the money? And did the quality of their written application count, or was it just the potential power of their creativity? All of these factors were considered, one way or the other. 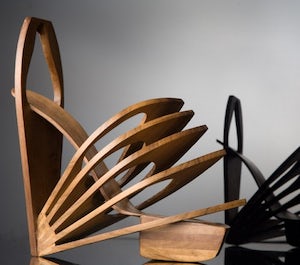 One of the strong favourites, and a new discovery for BoF, was Chau Har Lee, whose architectural shoe designs had many of the panel literally banging on the table to fervently support the young graduate of Cordwainers and The Royal College of Art. Though Lee has yet to secure any stockists, the sophistication of her designs are truly outstanding. Well done.

Louise Goldin may not be a name that is new to regular readers of BoF, but her genuine knitwear innovation continue to make her a standout. One of the best ways to get to know Louise better is through the in-depth 10 episode UNRAVELLED documentary on SHOWStudio (filmed by our friends at Pundersons Gardens), chronicling the development of her Autumn/Winter 2009 collection.

Mary Katrantzou was another big hit. Indeed, who could forget those trompe l'oeil jewellery printed sheath dresses she sent out in at the CSM Graduate show in February 2008? Apparently, nobody. The strength of her graduate collection was still fixed in the minds of many of the judges. It was a such a strong statement that her aesthetic and approach were very clearly defined from the start, though Ms. Katrantzou's challenge will be to run with this emerging signature, without becoming trapped by it.

Also recognised for her strength in prints was Hermione de Paula, who graced the BoF Spotlight last October. When I first saw Hermione's collection at the Vauxhaul Fashion Scout, it was clear she was a designer with real potential. I'm glad the judges felt the same way. We love to see our Spotlightees moving on to bigger and better things.

The judges also wanted acknowledge some new names, and I was thrilled when they settled on Thomas Tait, another designer who was recently featured on BoF and who attended the dinner for Canadians working in fashion at the Canadian High Commission.

The winner of the first Dorchester Collection Fashion Prize will be announced in November, 2010 and BoF will be on the case to bring you the final decision. Best of luck to everyone!

Imran Amed is editor and founder of The Business of Fashion