Can 180 The Strand Become London’s Next Fashion Hub?

The Store founder Alex Eagle is turning 180 The Strand into a space for exhibitions, events and, soon, the offices of Dazed Media and the British Fashion Council.

Can 180 The Strand Become London’s Next Fashion Hub?

The Store founder Alex Eagle is turning 180 The Strand into a space for exhibitions, events and, soon, the offices of Dazed Media and the British Fashion Council.

LONDON, United Kingdom — Yesterday morning, Roksanda Ilincic unveiled her Spring/Summer 2017 collection at 180 The Strand, a cavernous building in central London which houses a warren of bunker-like studios and event spaces with concrete grey walls and rugged ceilings strung with cables and plugs.

Retail and concept work space company The Store is the long-lead tenant on the building, which founder Alex Eagle plans to turn into a hub where London’s creative communities can work, socialise, shop, host events and broadcast using its on-site studios facilities. Even before The Store moved in, 180 The Strand had fashion credentials — hosting industry events including shows for Christopher Kane, Joseph and Thomas Tait, Louis Vuitton’s Series 3 exhibition, and serving as the main location for London Fashion Week Men’s in June.

“The future of all space is both a physical experience of being in that space and being able to broadcast that experience to the world. The ambition for The Store reaches beyond fashion: the experiences we are curating in the space will include art, food, music and architecture,” says Alex Eagle, founder of The Store, which has outposts at Soho House in Berlin and Soho Farmhouse in Oxfordshire.

180 The Strand has 10 studios and is large enough for 30 companies to use as an employee base. BoF has learned that both Dazed Media and The British Fashion Council plan to move their offices to 180 The Strand. 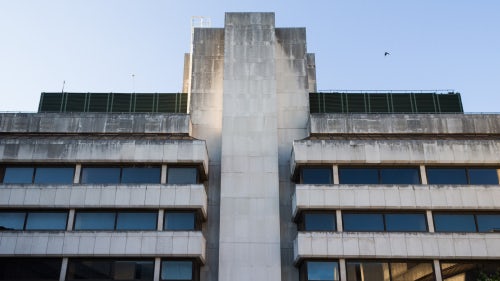 “It’s the chance for us to have our own studio, the chance for us to all be in one space,” Jefferson Hack, chief executive officer and co-founder of Dazed Media, tells BoF. Currently, Dazed’s team is split between two workspaces in East London. At 180 The Strand, the company will have its own studio and access to the other studios and event spaces within the building. “We don’t have studios right now, we just have to hire other people’s and that’s not the future. The future of publishing is broadcast, the future of retail is broadcast, and I think we all share that same thinking,” says Hack.

The British Fashion Council is also in the final stages of talks to move in to the space. “180 Strand has shown its fashion credentials,” says Caroline Rush, chief executive officer of the British Fashion Council. “As more creative businesses and flexible artists’ studios move in, the area is set to become a new creative hub in the heart of London and we hope that fashion will continue to play its part.” Rush declined to comment on the BFC’s impending move to 180 The Strand.

As well as its studio spaces — many of which are currently being used as part of The Infinite Mix, an audio-visual art exhibition by the Hayward Gallery, whose main site is currently undergoing a two-year refurbishment — The Store at 180 The Strand includes a light-filled café, adorned with green hanging plants and patchwork marble tables, and a store selling items including books and vinyl records.

Co-working spaces like Second Home in East London are popping up in major cities, and many fashion and luxury brands have moved into hosting experiences such as exhibitions. What sets The Store at 180 The Strand apart, however, is its broadcast facilities. “The Store Studios is our approach to moving beyond traditional retail. Rather than focusing on product sold per square foot, our focus is to create experiences for a larger audience through broadcast,” says Eagle. “A shop on the high street with a large footfall can reach 1,000 people on a busy day, whereas an experience space can reach a million people around the world in a matter of hours.”

The building’s location in the centre of the city, close to London's Covent Garden, is also a few doors down from Somerset House, the former home of London Fashion Week. But with LFW now based in Soho, and many fashion companies and organisations — including JW Anderson, Roksanda and the new London College of Fashion campus — opting to be based in East London, what attracts creative companies to the neighbourhood around 180 The Strand?

“It’s not got a name, it’s kind of inbetween-ist. It’s a liminal space. I’ve always liked to be in unclassified zones,” says Hack. And though Dazed’s roots lie in East London, he adds, “East London just isn’t what East London used to be. It’s just very commercial, very straight.”

Eagle adds: “With the last decade's rapid growth of East London, the part of the Strand where The Store is located has reasserted itself as the centre of the capital, linking East, West, North and South — meaning it's the ideal location to be based.”