No one is pushing the country's fashion market further or faster than billionaire rivals Jack Ma and Pony Ma, the founders of Alibaba and Tencent.

No one is pushing the country's fashion market further or faster than billionaire rivals Jack Ma and Pony Ma, the founders of Alibaba and Tencent.

SHANGHAI, China — They are the men with the Midas touch. In recent years, they have traded the title of China’s richest man. Everything they build or back turns to gold — or so we’re told. Hero-worshiping fans would have us overlook the missteps of Jack Ma and Pony Ma, whether it be the former’s blocked takeover of MoneyGram or the latter’s attempt to get a slice of China’s search engine space.

But whatever their stumbles, either as moguls or as men, Mr Ma and Mr Ma are true mavericks. They are not related but share the same surname, the Chinese character for horse, and have built the two dominant internet companies in one of the largest and most complex internet markets on earth.

In 2017, Alibaba and Tencent joined the exalted club of tech companies with a market capitalisation of $500 billion or more — think Apple, Amazon, Alphabet. By August 2018, both saw their market cap fall, to $465.11 billion for Alibaba Group and $425.47 billion for Tencent. Not bad, when, despite the market dip, such figures are still as big as Thailand’s economy.

So who are these two technology titans leading China’s digital economy and how are they targeting the fashion industry?

Jack Ma is known for his eccentric flair, whether dancing in full costume to a Thriller-era Michael Jackson tune at an Alibaba event or starring in a short kung-fu film with action star Jet Li. He is also not shy about headline-grabbing timing. Shortly after President Trump’s election, he visited Trump Tower in New York to boast about Alibaba’s potential for job creation in the US, garnering global headlines.  Even the announcement he made last month to explain his succession plan for retirement next year was done with a flourish.

Until recently, everyone played in their own sandbox. Now the sand is starting to spill over.

“They called me crazy Jack [back in the day]. I think crazy is good. We are crazy but we’re not stupid,” he once said. Indeed, the 54-year-old currently has a net worth of over $40 billion. The mythology of Ma Yun, as he is called in his homeland, is universally known in China. Having failed the all-important “gaokao” college entrance exam twice (and enduring the humiliation of being the only applicant denied a job at KFC when it came to his hometown), Ma was eventually admitted into a teacher's college and, after graduating, worked as an English teacher making $15 a month. In 1995, a visit to the US led Ma to discover the internet and in 1999, Alibaba was born.

Pony Ma, on the other hand, has a preference for the understated, dressed in a conservative uniform of button-down shirts and charcoal suits. A gaming enthusiast with a computing background, the low-key executive did not achieve his childhood dream of becoming an astronomer, but his consolation is a fortune worth more than $35 billion. In recent years, as Tencent has shifted strategy from building its own ecosystem of products to buying its way into various sectors, he has become a reluctant frontman for a company traditionally viewed as insular and opaque.

Tencent-watchers describe Pony Ma as a classic proponent of the traditional Chinese game “go,” which requires long-term strategic thinking and a cool head for success. “Personality-wise Pony is a typical Guangdong businessman; he tends to avoid the limelight,” explains tech analyst and China Channel co-founder Matthew Brennan. “I think certainly when he started off, he was the typical sort of IT-industry geek and that comes across in their focus on data, user experience and building excellent products.”

But as different as the men may be, their gigantic companies are increasingly in direct competition with one another on multiple fronts at once. Over the past five years, they have moved beyond their core areas to build, invest or acquire their way into a multitude of sectors. 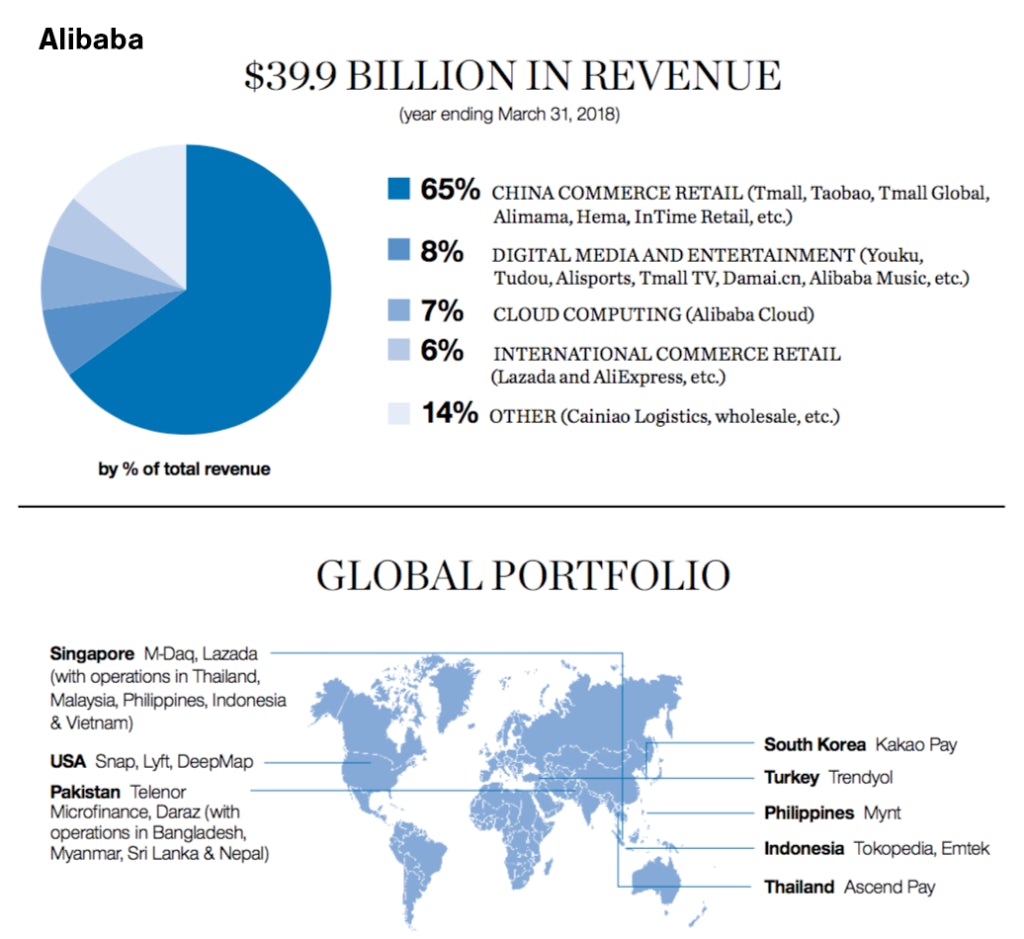 “Until recently, everyone played in their own sandbox,” Deborah Weinswig, chief executive of China-focused retail consultancy Coresight Research recently told Fortune. “Now the sand is starting to spill over.”

Back when Alibaba’s most famous asset was e-commerce site Taobao and Tencent’s was the WeChat social network, the two Mr Mas were operating in distinct areas.

Their head-to-head competition was sparked initially by Alibaba’s investment in Weibo, China’s largest microblogging service and the main competitor of Tencent’s WeChat for social network domination, back in 2013. The link-up gave many at the time the impression that the combined Alibaba/Weibo team would be an unbeatable force as they closed the loop between social and e-commerce.

Not to be outdone, Tencent hit back in 2014 with its investment in JD.com, the arch-rival of Alibaba’s Tmall. This brought Alibaba’s most voracious B2C e-commerce competitor into the WeChat fold, even more completely integrating e-commerce into social media. The stage was then set for the Alibaba and Tencent rivalry that has since been the main driver for the billions of dollars these two giants have sunk into investments of all kinds in the intervening years.

Both companies now hold interests in multiple e-commerce platforms where fashion makes up a significant category, Tencent through its investments in JD.com, Vipshop and Pinduoduo. Offline, Alibaba has acquired a majority stake in InTime Retail, taking the Chinese department store group private in the process, while Tencent has partnered with Wanda Commercial Properties (China’s largest owner and operator of department stores), Yonghui Superstores and Walmart. 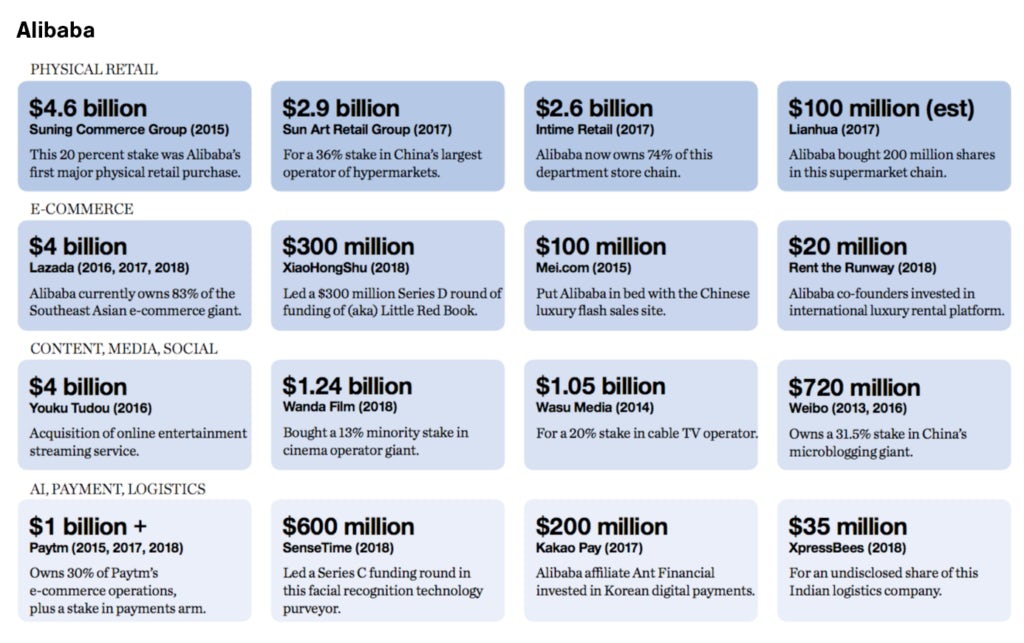 Over the past year, the two companies have clashed in the luxury sector too via rival B2C platforms Toplife and Luxury Pavilion. Tencent’s portfolio includes a stake in JD.com, whose Toplife app now sells luxury brands like Armani, Balenciaga and Alexander McQueen. In direct competition with Toplife is Luxury Pavilion, which is part of Alibaba-owned Tmall, and now sells Burberry, Versace and Givenchy, among others.

At the December Fortune Global Forum 2017 conference in Guangzhou, Tencent’s Pony Ma said he felt that the two companies were now competing in “too many” areas and said that it sometimes got “frustrating.” “Sometimes I think, ‘Ah, we’re competing in this now, too? All right then,’” he joked.

The two men are wrangling for market share across many sectors. Take the ride-hailing market, for instance. Alibaba pumped billions in Didi Chuxing, the Chinese app that took on and defeated Uber in China. Tencent was also part of funding rounds for Didi Chuxing and it has invested in American car-share player Lyft.

Beyond China, Alibaba’s most familiar international fashion investments are probably Rent the Runway and Ordre, but arguably more significant are the stakes it now has in foreign e-commerce giants that sell fashion such as Trendyol in Turkey, Daraz in Pakistan, Tokopedia in Indonesia and Lazada in Singapore.

Tencent stood on the international investment stage when it acquired 5 percent of Elon Musk’s Tesla and its now questionable stake in Snap. Some of its other assets, however, hardly ring a bell in the fashion capitals of the West. But that’s not to say that the 5,000-plus stores that make up China’s menswear chain Heilan and Indian e-commerce giant Flipkart (which owns Myntra) are not a big deal in Asia’s fashion landscape. Tencent-led investments for these two came in at $3 billion. 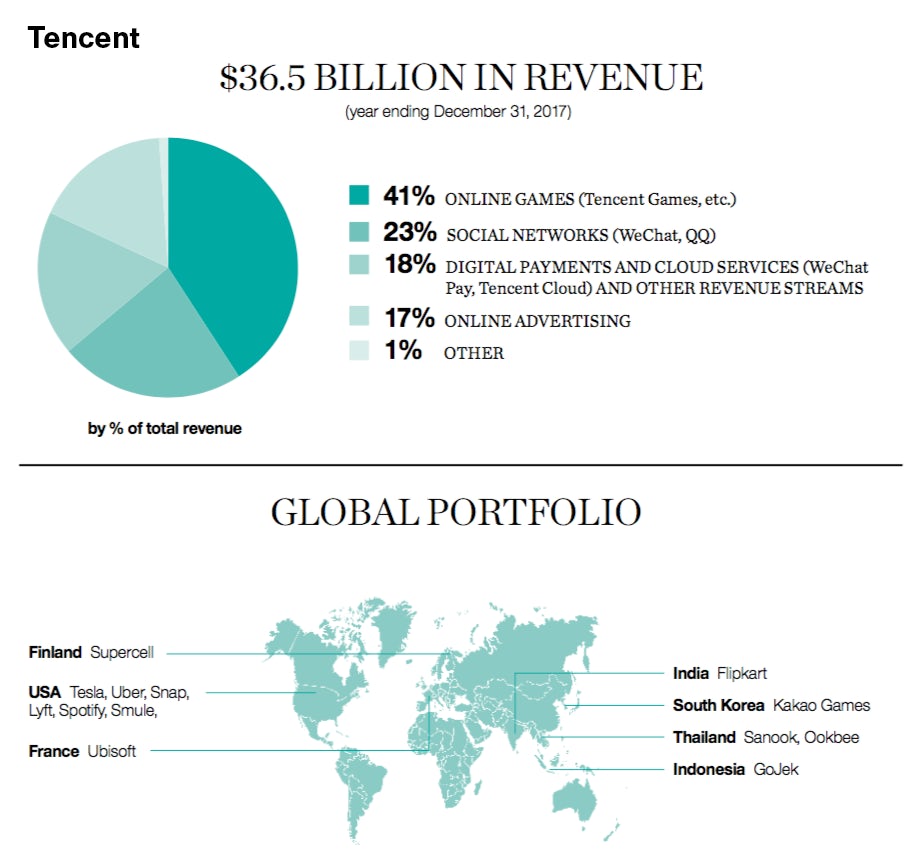 Arguably, even more pertinent to the future of the global fashion industry is the focus by both Mr Mas on O2O (online-to-offline) or “new retail” initiatives — assets and strategies featuring the digitisation of offline retail and the merging of digital and real-world retail through omnichannel. The otherwise unflappable Pony Ma once said, “If you ask me what I worry about every morning when I wake up, it’s that I don’t understand future mainstream Internet users’ habits.”

With retail sales and consumer confidence continuing to grow in China and Alibaba and Tencent dominant in the country’s digital payments sector, both are well placed to drive the next phase of retail digitisation, the so-called “O2O2O” space (online-to-offline-to-online again). But, this being China, politics also plays a big part

“Beijing has declared that the economy should be refocused more towards consumer sectors. Both Alibaba and Tencent are good corporate citizens, and will usually try to implement Beijing’s dictates,” says Brock Silvers, managing director of Kaiyuan Capital, a China-based multi-asset advisory. Hence another driver for the recent spate of investments by Mr Ma and Mr Ma.

But recent volatility of Chinese tech stocks has some concerned. And according to Silvers, the future of the companies’ frentic investment activity is still unclear. “These are both great companies with tremendous potential. But will a lack of focus cause them to miss out on the full measure of that potential?” he asks with a rhetorical flourish.

“While I inherently prefer Tencent, that’s where the potential loss of focus is worrying. The retail and fashion investments may work out, in which case shareholders will do well, but I no longer understand Tencent’s business model.” 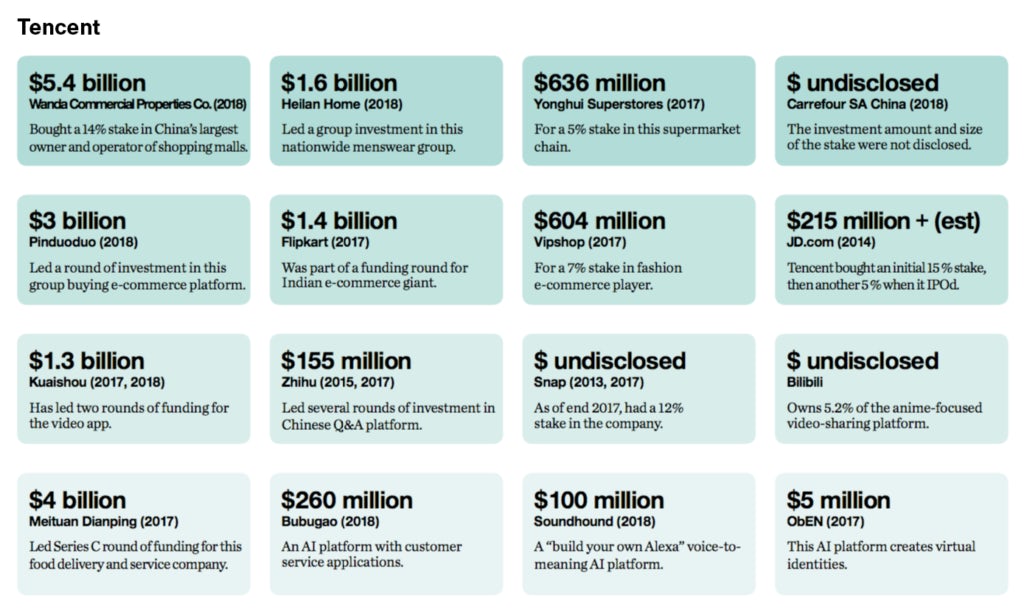 Still, their diversification push has culminated in nothing less than a complete market transformation. China today is a market where many of the country’s billion-plus consumers find themselves paying Mr Ma or Mr Ma (or indeed both) a percentage of almost every transaction they make along the path to purchase.

Unsurprisingly, both men have faced criticism at home and abroad for the ways in which their companies have amassed their fortunes. One source of irritation to Western hawks is that both have to play by the Chinese government’s rules, especially when it comes to codifying internet censorship into the ecosystem.

Jack Ma has been the public face for China’s battle with counterfeit goods, though he slams Alibaba’s multiple USTA blacklistings and maintains that his company is in fact leading the charge against fakes in the Chinese marketplace. “You should learn from your competitor, but never copy. Copy and you die,” he has said repeatedly.

These are both great companies with tremendous potential but will a lack of focus cause them to miss out on the full measure of that potential?

Tencent, meanwhile, was a popular enemy of China’s tech insiders for developing its own versions of successful products and wiping out smaller competitors, though this criticism has been tempered by the company’s decision to go on an investment binge in recent years. One remaining challenge is the company’s perceived unfriendliness to women, not helped by its male-dominated C-suite.

Still, while an emerging duopoly such as this attracts suspicion from some in the West, it does not from mainstream Chinese society. Jack Ma and Pony Ma continue to be admired by many millions across China and millions more in Asia where they are expanding at great speed. They may have been fashion outsiders for most of their careers, but thanks to their maverick spirit they will continue to shape Asian fashion consumers to a degree that would make more than a few fashion executives green with envy.