The Belgian designer has sold a majority share in his label to Spanish luxury group Puig. What’s at stake?

Van Noten will remain a “significant” minority shareholder, as well as chief creative officer and chairman of the board, according to the companies. The team will remain in Antwerp, where the designer established his business in 1986. The financial terms of the deal were not disclosed.

“As an independent house, Dries Van Noten has, over the years, built an exceptional reputation with its avant-garde fashion collections,” said Marc Puig, chief executive and chairman of the group, which also owns Carolina Herrera, Jean Paul Gaultier, Nina Ricci and Paco Rabanne. “Our entry today into the capital structure of Dries Van Noten proves yet again our strategic commitment to developing the Puig fashion business.”

To some, Puig may be an unexpected partner for the Belgian designer. For its first 80-some years in existence, Puig dealt only in fragrance. Fashion, while complementary, has a completely different business model. Perfume is a high-margin, high-volume business that serves as a size-free, affordable entry point into a brand. Ready-to-wear is lower volume, with a more complex supply chain and unreliable margins. 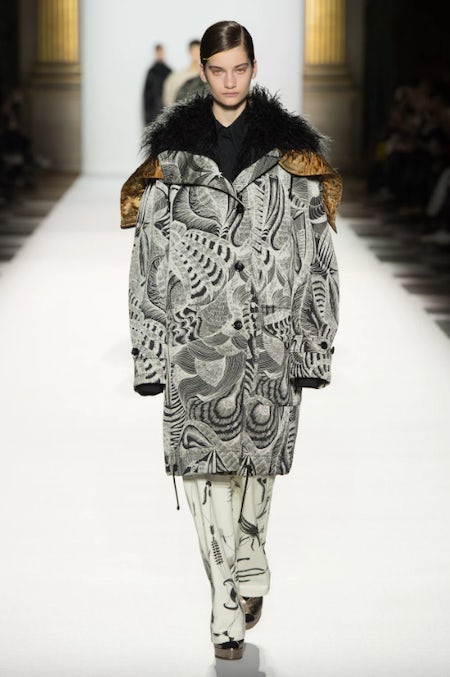 However, Puig’s interests have been shifting. In 1987, the group acquired the French fashion house Paco Rabanne, whose fragrance it had been producing since the late 60s. Its other major ready-to-wear business is Caroline Herrera, which it acquired from Venezuelan businessman José de Armas in 1995.

While it has had some success with accessories — in particular, shoes — Dries Van Noten is one of few fashion companies for which ready-to-wear is a major driver of revenue, accounting for more than 90 percent of sales, according to reports. (His apparel is by no means inexpensive, but it is known to be fairly priced when compared to competitors.) The company doesn’t publish or reveal sales figures, although market sources estimate that 2018 revenue will be around $100 million.

Given the brand’s potential — and its unique positioning in the market — Van Noten likely entertained offers from various investors. Joining Puig — known for giving their designers creative independence — will offer the infrastructure Dries Van Noten needs to enter new, more scalable categories. While Van Noten has yet to release a signature fragrance, he did collaborate on a limited-edition scene with the perfumer Frédéric Malle.

"Puig sees an opportunity to develop the beauty business of Dries Van Noten," said Luca Solca, head of luxury goods at Exane BNP Paribas. For Puig, Dries Van Noten also offers a new level of fashion relevancy that will help to further establish it as an apparel player set to compete against the likes of Mayhoola, LVMH, Richemont and Kering.

And Van Noten’s core business is still growing. In a 2017 interview with the Financial Times’ How To Spend It, the designer said his business experienced double-digit growth for three years straight. “Independence is that you don’t have to copy an existing business model,” he said onstage at VOICES, BoF’s annual gathering for big thinkers, last December. “We achieved what we achieved often by coincidence. We grabbed opportunity in an organic way.”