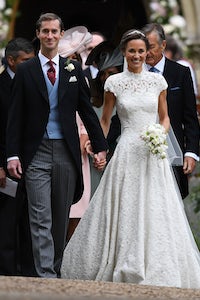 LONDON, United Kingdom — So the cat was, in fact, out of the bag before Christmas when Giles Deacon and an assistant were spotted toting garment bags into Pippa Middleton’s house in Kensington. A handful of red herrings were floated, some of them so likely that it seemed almost too much to hope that Deacon, a true English fashion eccentric, would get the job. But on Saturday morning, when Pippa climbed out of her vintage car at St Mark’s Church in Englefield, Berkshire, it was clear that our most idiosyncratic couturier had scooped the plum job of making the UK’s highest-profile almost-royal’s wedding day that much more memorable.

All credit to the bride for making such an inspired choice. But you could scarcely accuse Middleton of guilelessness in her grasp of how to make an impact at a wedding. As her sister’s maid of honour, she all but stole the show in a sinuous McQueen gown that would have broken the internet if that had even been a thing six years ago.

She took no such chance with her own nuptials. Prince George and Princess Charlotte were page boy and bridesmaid. Aw! Now all eyes up, to The Dress, a symphony of bespoke lace that created an illusion of absolute seamlessness. “I wanted that ‘how-was-that-done?’ factor,” Deacon explained in a conversation on Thursday. “It’s all hand-pieced which is why you don’t actually see a seam.” The effect was compounded by the pearls hand-embroidered on the high neck, intricately degradé-ed on the bodice and corset. Stephen Jones’s veil, also studded with tiny pearl embroideries, outlined the dress to the floor. But all that delicacy was counterbalanced by the drama of the silhouette, from the folds at the front of the dress to the sweep of the tulle-filled train at the back. “There’s incredible movement,” Deacon rhapsodised. “I always loved the dancing scenes in "The Leopard." I know they were all hoop crinolines in the film, but there’s something gorgeous about having that great movement, with the skirt spinning round, keeping its shape.”

She has a great eye, she knew what she wanted.

Luchino Visconti’s iconic 1963 movie, with its ballroom scene that is considered to be one of the most beautiful sequences ever committed to celluloid, is exactly the kind of reference point Deacon can bring to his clients. “I’ve never been just about fashion,” he said. “One foot in, one foot out, in art, craftsmanship, tradition, modernity, technology, right from the start of my career.” As far as fashion was concerned, he considered himself a square peg in a round hole. Maybe that’s why he always starts out by asking his clients what it is they don’t want. On the other hand, “Balenciaga knew his customers inside out,” Deacon added. “I do a hell of a lot of research into every client commission.” Couturier-client confidentiality is binding, so we’ll never know how Pippa steered their conversation. He did, however concede, “She has a great eye, she knew what she wanted.” 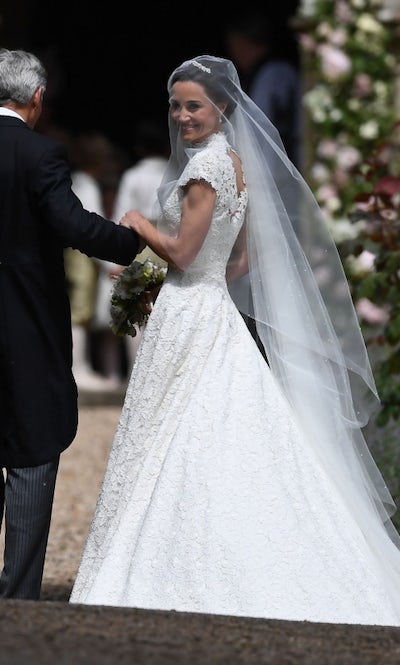 It was much easier for Deacon to talk about his atelier, the team responsible for The Dress. “It’s small, 15 to 20 people depending on the phase of production, with the skills to make exquisite things. In London, I think there’s only McQueen, Ralph & Russo and us with that capability. We’ve worked together for such a long time.” Eighteen months ago, Deacon suspended his ready-to-wear business to focus on couture. “I’d been doing it for 13 years and I was getting increasingly weary of how the ready-to-wear world was beginning to unravel. Times had changed. The homogeneity of it was so boring. I found myself thinking, ‘Is this why I went to art school, to be working like this?’ It wasn’t what I was about. The thing I was enjoying was making extraordinary, original, different things. And I found that’s what my clients wanted. They could get their Gucci-Prada-whatever anywhere.”

Giles Deacon Couture presented its first full collection in July 2016. The charge it gave the designer reminded him of his first show in 2003. “London was on its knees,” he recalled. “Lee, Hussein, Stella had all gone to Paris. Shows were running late, badly lit. Katie [Grand, Deacon’s longtime co-conspirator] and I could have chosen anywhere, but we thought ‘Now’s the real time to do London.’” So they shipped in a troupe of the super-est supermodels and got the next-day covers of the New York Times, Women’s Wear Daily and the Sun.

His couture show generated a similar degree of blanket interest. But it came with a price. “We were so busy with this [the Middleton commission] and couture orders that we didn’t have the time or means to get a full collection together for January. And because it’s occasion-led rather than season-led, we still had orders coming in from last July a month ago.” Deacon admitted, “It’s been an organisational transition, a real learning curve. But I have a much closer interaction with the clients, which is what this is all about. And the schedule enables me to spend more time in London. It’s much more culturally enriching than the ready-to-wear cycle. I can see bands, go to exhibitions.”

I wanted that ‘how-was-that-done?’ factor. It’s all hand-pieced which is why you don’t actually see a seam.

The concept of couture may be old, but Deacon has been impressed by the sophistication and ardour of its ever-growing audience. “We have maybe 50, 60 clients around the world, and the more I get involved, the greater the number of potential clients is. But we’re building the business organically. I don’t want to take on 70 orders and not be able to fulfill them.” The human touch, the intimacy of the relationship between designer and client has always been a hallmark of couture. Deacon honours it. He is always present at the first appointment. And clients are welcome to stop by his East End atelier whenever they’re passing through London. Still, he said he believed the future for couture lay in technology. “I have women Snapchatting themselves in their dresses for their friends back home. I want to develop an avatar for each client so she can see herself in an outfit.”

“Tech couture.” He pondered the notion for a moment. It sounded like one resounding route to the future. Deacon’s been considering others. Hollywood, for one. After costuming "The Neon Demon" and the "Absolutely Fabulous" movie, he’s keen to develop that side of his business. He has a live-in incentive, a mainline to showbusiness in the astounding form of his partner, the actress Gwendoline Christie. And he already has women like Cate Blanchett and Thandie Newton as followers.

Deacon’s other major preoccupation is bridal dresses. Pippa Middleton couldn’t have booked an appointment at a better time. “When you set up a modern British couture house, bridal is an essential part of the business,” said Deacon the pragmatist. Deacon the designer added this: “They’re wonderful pieces to work on. The red carpet is fantastic, but it’s a real privilege to create a unique bridal piece for a client who may have dreamed about it all their life.”

There’s one thing I haven’t mentioned. Deacon buried his father on Monday. So his week was bookended by personal loss and professional triumph, a funeral and a wedding. It’s the sort of stark contrast that inspires profound reflection, maybe even more pointed by the fact that, after Saturday morning, the entire world would have an opinion on him. On top of which, there would be hundreds of women ready to take their nuptial cue from Mrs. Matthews. “My concentration has been to get the piece done as beautifully and professionally as possible,” Deacon said. “Whatever happens afterwards, happens. That’s the way you’ve got to be.” In life as in art… let's just call it the calm before the storm.