How I Became… Fashion Director of Grazia UK

‘The absence of representation and how difficult it was to find Black models and Black editors fuelled my desire to try to break into fashion,’ says Kenya Hunt, who offers her career advice for aspiring and marginalised talent.

How I Became… Fashion Director of Grazia UK

‘The absence of representation and how difficult it was to find Black models and Black editors fuelled my desire to try to break into fashion,’ says Kenya Hunt, who offers her career advice for aspiring and marginalised talent.

LONDON, United Kingdom — While Kenya Hunt describes her career path as “conventional and linear” — she obtained a BA in English Literature at the University of Virginia; an MA in Literature and the Arts at Oxford University; work experience at the news and culture paper Village Voice, music magazine Vibe, and Condé Nast’s Jane as a research assistant — her drive to join the industry was fuelled by fashion’s systemic discrimination of marginalised individuals, especially people of colour.

“I fixated on the fact that I couldn't see myself and when I did, through models like Naomi Campbell, Beverly Peele and Veronica Webb, I kept gravitating towards it and wanting to see more,” Hunt told BoF. “Growing up, having all these questions, definitely inspired me to want to try to address them as best I could once I entered the industry.”

Hunt’s first job was as an assistant editor at Jane before she moved to the UK. Her work has been published by the likes of The Guardian, Vogue, Marie Claire, The Evening Standard. She joined Elle in 2015 as their fashion features director and later served as their deputy editor until joining Grazia UK in September 2019 as fashion director.

Advocating for greater diversity within the fashion industry throughout her career, Hunt is also the founder of R.O.O.M. Mentoring, which provides a supportive network for aspiring designers, journalists and image makers of colour in London. This year, Hunt is publishing her book, GIRL: Essays on Black Womanhood. Now, she shares her career advice. 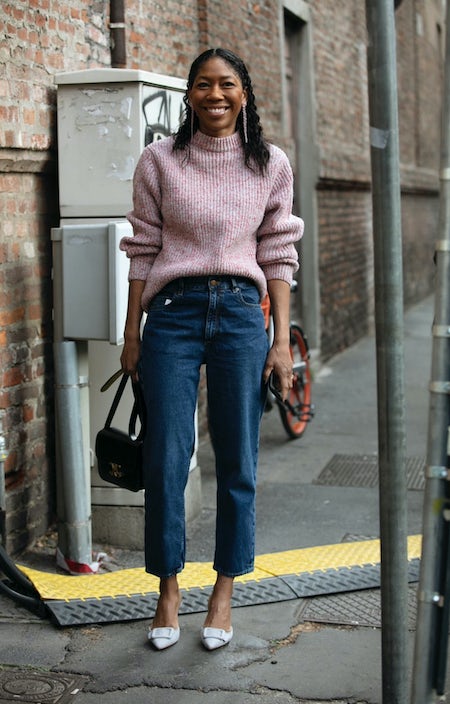 Like many people who work in fashion, I was exposed to the industry at a young age through the magazines on my mother's coffee table, like Vogue, Elle, Essence and Ebony. But I noticed a lot of the magazines didn't include women who looked like me. I fixated on the fact that I couldn't see myself and when I did, through models like Naomi Campbell, Beverly Peele and Veronica Webb, I kept gravitating towards it and wanting to see more.

The Ebony Fashion Fair — a traveling extravaganza created by the events division of Ebony magazine — was also a popular event when I was growing up. They had fashion shows that my mum, my aunt and their friends used to go to, and they would have models wearing brands like Saint Laurent. But then, I would see Paris catwalk shows on CNN or in magazines, and I wondered why you had a circuit where you'd have Black models wearing this clothing, and then this other world where there were little to no [Black models].

The absence of representation and how difficult it was to find Black models and Black editors — I only knew of André Leon Talley — fuelled my desire to try to break into fashion. Growing up, having all these questions, definitely inspired me to want to try to address them as best I could once I entered the industry.

How did you get your first job in fashion?

My path was conventional and linear — I did internships during the summer and Christmas break, going up to New York from Virginia, at the Village Voice and Vibe magazine.

Obviously, we know now that internships are bad in that we would just be working for free, but it was great in that I was able to build a lot of relationships. Working at the Village Voice led to an editor hiring me at Vibe, and an editor I met there recommended me for a position at Jane. I started out in fact-checking as a research assistant — that was my gateway in, which doesn't even exist anymore — and I quickly moved up from there.

The biggest lesson I learned was making sure that what you are putting out there is actually sound and correct. That's so important, especially in the age of the internet where everyone's just reporting off of what everyone else is saying. And if you make a mistake, take responsibility and own up to it so you learn from it rather than try to pretend it didn't happen or not address it.

The skills of a great storyteller are transferable. You should be able to write about a runway show but also a protest in Idaho.

I also learned the importance of the relationships that you make, and tried to befriend and learn from as many people as I could. We tend to rise up the ranks in groups — it's like your graduating classes but in magazines — so there is a real community spirit.

Remember that it’s a really small industry, so we must be mindful of how we navigate it in terms of relationships. Look at each job or internship as building on another — it’s accumulative experience.  You never want to burn a bridge when, ultimately, it’s a community of people you’re going to be working around for a really long time. Even if they’re not necessarily in the walls of your office, you’ll see them at shows or on trips.

What set your career path to becoming a fashion director at Grazia?

Jane determined the rest of my career path because it was about the ideas that you had. It wasn't siloed, so if you had a great idea, no matter what department you were in, you were allowed to take it and run with it. It had an interdisciplinary vibe and culture to it — we were actively encouraged to connect all those dots between music and culture and film and fashion, so I've always gravitated towards positions that allow me to do that.

I think Grazia has the same spirit that existed at Jane back in the day. It's quite multifaceted, as is most editorial positions these days, because it's trends, it's digital, it's social, there are events, you're thinking about things editorially and commercially — you have to think about so many touchpoints. You have to think about how visuals might translate on a website, on a desktop or phone screen.

Having been at a monthly for quite some time, working across a fortnightly and website now at Grazia — it's a shorter lead on top of an even shorter lead. In a year like 2020, in which we're facing so much newness and everything is unprecedented and needs to be discussed, the beauty of a fortnightly means we can talk about all those things. It allows us greater freedom and flexibility to choose the moment to respond to the new reality.

How have you stayed on top of that evolution?

For the vast majority of my career, people have been talking about the digital disruption or the threat of it. I've just learned to embrace it and lean into it rather than trying to fight it all the time because I don't think that's necessarily healthy. There are a lot of things we can control and a lot of things we can't, so I just go with it and adapt as we go along.

It's trends, it's digital, it's social, there are events, you're thinking about things editorially and commercially — you have to think about so many touchpoints.

An early piece of advice I got from an editor was about the importance of being an omnivore — to just consume everything, as much as you possibly can. Now, that's incredibly hard to do with the market as saturated as it is but I try to stay on top of the outlets that I have in my menu of regular outlets and read them in the mornings.

I try to consume as much as I can in an intentional way. Be mindful of where the information is coming from. Is it reputable? It's about having a fierce edit of the information that I consume regularly, in a way that will help me preserve my mental health and peace of mind.

What advice do you give upcoming talent in your mentoring network?

A sense of community helped me navigate publishing, especially when, a lot of the time, my closest friends and I were the only person of colour on our team. So, we fostered another network outside of our respective magazines — and what makes me most hopeful today is seeing how many people are forming their own groups and coalitions, not necessarily waiting for a giant systemic change but doing it at a grassroots level.

Some [entry-level, marginalised talent] are feeling like now is the time to speak up about the mistreatment they've experienced or seen — they face a lot of microaggressions and bad behaviour all the time, and they are just trying to figure out how to navigate it. Others are disempowered and afraid to speak up because they're worried about their job prospects. I'm being asked about this a lot.

When you're an assistant or junior, you can sometimes feel so powerless in the grand scheme of things, but we have more power than we think we do. And for people at my level, who've been complaining about the lack of diversity within the power structures for so long, whether it’s mentoring or speaking up when we have our meetings, it’s about keeping the topic out there and holding people accountable.

What skills are necessary for an aspiring fashion director?

From the visual side of things, it’s the taste level, which a lot of times is innate, so you don’t need to come from the small handful of legacy print and digital titles. If you have a really good taste level and you’re consuming and following the right things, I think that’s a great indicator of what someone can do, combined with their work ethic.

When you're an assistant or junior, you can sometimes feel so powerless in the grand scheme of things, but we have more power than we think we do.

From a writing standpoint, the skills of a great storyteller are transferable. You should be able to write brilliantly about a runway show but also a protest in Idaho. I’m not so fussed about what schools people have come out of — I am about whether or not they have a real grasp of how to tell a story and offer structure. Skills can be developed and nurtured.

What do you believe is essential to working in fashion?

Curiosity about any new thing or tool or title is so important, and to have that curiosity outside of fashion, because sometimes we can be quite myopic and just consume everything that happens within this bubble. We need to carry that curiosity with us wherever we go.

It’s also essential to take the time to investigate off-screen. Instagram and all these social media outlets are so valuable and great for discovery, but discover things in real life as well — which is hard to do so in the era of lockdown and quarantine, but there’s so much value in seeing stuff in the world. The best ideas come out of having those one on one conversations verbally. We shouldn’t lose sight in the value of being out there in the world.