LONDON, United Kingdom — At the age of 16, Ib Kamara arrived in London to study science at the behest of his parents. Unhappy in his studies, his family agreed Kamara could take a year out, during which time he began working with a youth magazine in South London, experiencing his first fashion shoot and realising his desire for a creative career.

“Breaking that to my family was one of the hardest things,” Kamara told BoF. “It was harder than coming out to my parents, because African parents put so much pressure on careers and degrees.”

Kamara enrolled in an art and design course at Westminster Kingsway College before he was admitted to the fashion communication and promotion course at Central Saint Martins. Around this time, he began interning for the late stylist Barry Kamen, a celebrated alumnus of the '80s Buffalo movement.

At Saint Martins, Kamara worked on his project “2026,” shown at Somerset House in 2016. Buffalo boy and British photographer Jamie Morgan saw the exhibition and made an introduction to Dazed’s Robbie Spencer, landing Kamara his first fashion editorial. 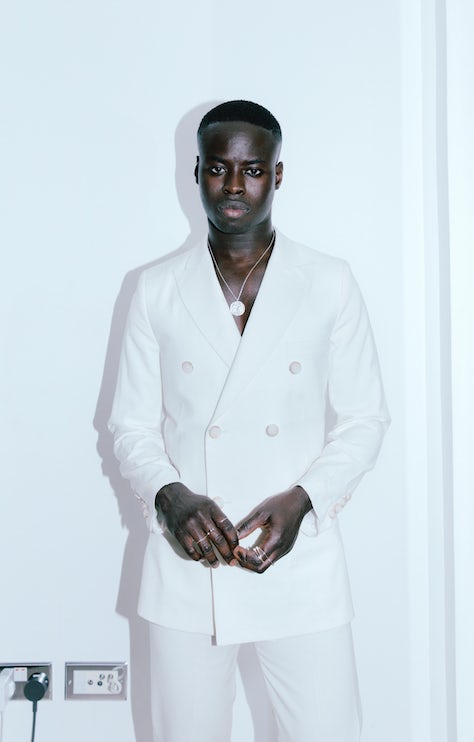 Since, the stylist has worked on creative and commercial projects for the likes of Italian and British Vogue, Stella McCartney and Burberry, Dior and Nike, as well as costume styling Sampha’s short film “Process,” directed by Kahlil Joseph. In 2018, two years after leaving Saint Martins, he became i-D’s fashion editor-at-large, adding “senior” to his job title in 2019. But first, Kamara had to overcome his dyslexia, nerves and the financial limitations that affront creatives starting out.

When I moved to London, I was forced to do a science degree and I was quite lost during that time. My family and I agreed I could take a year off and I started working for this youth mag in Brixton called Live Magazine, where I got to be on my first fashion shoot.

After that year, I told my family I was going to do an art and design course at Westminster Kingsway. Breaking that to my family was one of the hardest things — it was harder than coming out to my parents because African parents put so much pressure on careers and degrees. [But] you have to be honest with yourself. Do you see yourself doing that job for 10 or 20 years? Will it make you happy? I thought, no, I couldn't do that.

At Westminster Kingsway, I learned so much about textiles and fabrics, and I started thinking about how I could apply that to styling. However, growing up in Africa, all I had [to watch] was the BBC and CNN so I didn't have much [context of] pop culture. In London, I was looking at topics like the Arab Spring, standing up to governments, and I did a body of work with a guy on the street screaming. That photo got me into Central Saint Martins. They thought it was different from typical fashion imagery.

Did you explore other career options in the industry?

After Live Magazine, I was really pumped up and wanting to learn more about the industry, so I thought I could try PR and get close to shoots that way. Three weeks into a PR internship, I was sacked because it is a different ballgame. I’m very dyslexic, so I couldn't handle the emails. But that didn’t stop me from going to college to pursue other things and eventually find my way.

Emails are difficult to manage when you struggle to read. I have always made that clear — I would introduce myself and my flaws.

Emails are extremely difficult to manage when you struggle to read. So, I have always made that clear and would say, “Hey, I’m dyslexic, so please forgive my grammar or spelling mistakes.” English is also not my first language. I would introduce myself and my flaws and ask people to let me know if they can’t read something properly.

What did you learn from your first fashion editorial?

My first fashion editorial was with Dazed, in Paris and I was terrified. I thought I was going to mess it up — I still think that for most jobs. I always want a project to be the best and for me to be my best. That's not to say I think failing is a bad thing, but I try so hard to give it my all, no matter how small the project is.

I was also so shy but after working with Barry [Kamen], he made me feel like I had something to say. One of the last emails he sent me said, “You’re an outsider and you should never feel down about it. You just have to work with what you have.” It was a beautiful thing for him to have sent me — knowing I'm an outsider and that I should just be myself helps me overcome my nerves. 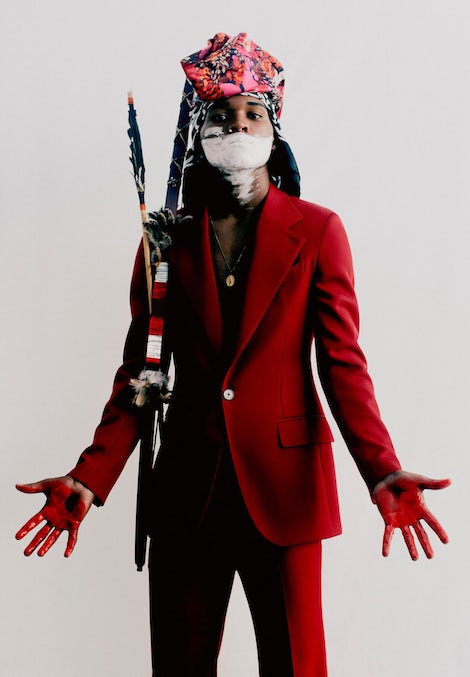 Before that first editorial, I had also just done my first commercial job and I was broke, but I had to invest all my money back into that shoot — to go to Paris, to get an apartment, to get all the clothes. That is what you do when you’re starting out — you spend all your money. I wouldn’t see friends for months so I could do shoots and pay the people who were working with me. I had to grow up very quickly after CSM. But in the long run, making these sacrifices pay off if you really love it.

What personal qualities made you stand out?

I think it was going the extra mile to be creative. When others saw how much money and time I invested into making a headpiece, a skirt or little bits and bobs, it showed I had a point of view and that I will go the extra mile to achieve it.

I worked really hard too. I had one assistant and we had six bags of clothing for that shoot in Paris. I had to carry four heavy bags of luggage on the Eurostar and now I have back problems because of styling. But I had to put in that work because no one else was going to put the work in for me, to get me where I am now.

How would you recommend others find their creative point of view?

When I'm creating a body of work, I’m drawing on things from my past. If I bring my years on earth into my work, it is going to be unique because no one else has lived the way I've lived. I grew up in a poor home in Sierra Leone. I played on a dirty beach. My grandma was a university head teacher. My aunties and uncles would dress in the most elaborate way to go to parties. I didn't grow up with magazines, so I had to make up stories in my head. I was a gay boy finding myself. That’s my story and only I can bring that into my work.

You have to look at yourself and your experiences, the things that you love and the things that make you cry, the movies you connect to, the person you first fell in love with. Once you search deeper within yourself, and when you bring that out, no one can take that away from you. I can tell from other stylists’ work that there's so much love and thought and research brought into their pictures. You can automatically connect to that person's point of view — and when it's not there, you can tell.

How can upcoming creatives stay productive in isolation?

I believe, no matter the circumstances, if you're passionate enough, you will still be creative. I'm always frustrated when friends say, “I live in a small room, I can't be creative.” I'm like, “Well, take your bed out of the room — then you have space.” If you really love it, you will do whatever it takes to enrich yourself with what you find inspiring.

Now is a great time to research and refine your taste. Be informed. Invest in yourself with information and visual language.

I think now is a great time to research and refine your taste. Be informed. Invest in yourself with information and visual language. I always look for research — that's how I get people to join my team. I want to see what you're interested in. My team and I do heavy research before we get on set, so I know exactly what I'm doing. Anybody can put clothes together — I want to style with a vision.

The greatest thing about being young is that we have social media and the internet. Everybody is at home right now, so [graduates should] reach out to people, get in their inboxes and floor them with your work. Tell them, “I can't do my final show, but here's my work. I love what you do, and I want to work with you when this is all over.” Use your own platforms as a point of entry into the wild and really push your work.

What do you think is essential to work in fashion?

I think vision, a point of view and hard work. Really, really hard work. Genuine love, passion and kindness is also essential for working in fashion. If you don't have those, you're going to be miserable. You should leave it for people that have decided they’re going to go through the roughest patch to get to a more beautiful place. That's what I had to do.

I'm still growing. I'm still learning and enriching myself. It doesn't stop. It's not the kind of career where you jump levels. You can be working on the same level for 10 years. But, because we love it, we are in it and we keep going. You need to really want to go into fashion because it's a very hard industry to break into. There are many obstacles so loving it is the only way you can make a career out of it.