LONDON, United Kingdom — Scroll through Instagram’s ‘Discover’ feed and the chances are you will come across the style phenomenon of the under-10’s. Take Coco (@coco_pinkprincess), a six-year old from Tokyo, with over 338,000 followers on Instagram, who is regularly trussed up in wares from the likes of Gucci, Moschino and Nike. Or there’s Ivan (@thegoldenfly), aka Lil Kid, son of the designer Natasha Zinko, who made his street style debut at Paris Fashion Week earlier this year. His profile reads ‘Yep, I’m a kid’, but his street style game is as on point as other streetwear aficionados decades his senior: Ivan is regularly snapped wearing limited-edition clothing from the likes of Supreme, Raf Simons and Vetements. 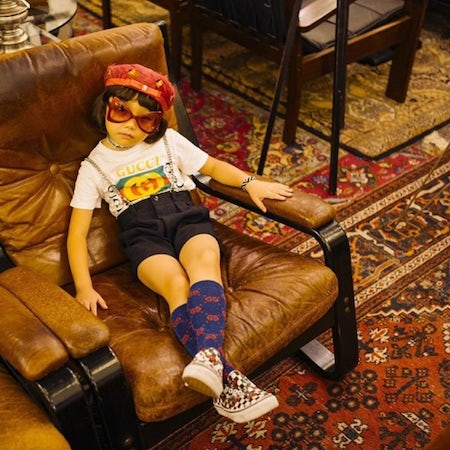 “People want to dress up their children to keep them fresh. Social media is making it easier to show pictures of your children, and parents and fashion labels are taking this demographic more seriously,” says David Park, an illustrator at Complex magazine, who launched a graphic alphabet book titled ‘ABC’s for the Little G’s’ earlier this year. Dedicated to ‘all the sneakerhead parents in the world’, Park’s book teaches toddlers their ABC’s via sneaker graphics: A is for Airmax, G is for Gucci, Y is for Yeezy…

The book emphasises a shift in perception: childrenswear is now cool. The market is currently worth $1.4 billion, according to Euromonitor, and the value of childrenswear in the US is estimated to grow 8 percent by 2021, to $34 million. Luxury brands from Oscar de la Renta to Dolce & Gabbana have long produced childrenswear, but the category is booming with launches from labels like Givenchy, Yeezy and Balenciaga, giving it an extra level of street cred.

“Streetwear-inspired pieces are scaled down for children aged 0-12,” says Philippe Fortunato, chief executive officer of Givenchy, which is developing kidswear as a fully-fledged category that will retail in over 150 stores worldwide. Givenchy Kids — which launches for Autumn/Winter 2017 — will drop twice yearly, with around 130 pieces each season. The brand hopes to harness the interest of its millennial consumers to buy into the line for their children. According to Fortunato, Givenchy has a relatively even split between sales of its men’s and women’s collections. “Developing a children’s line was only a matter of time,” he says.

Young parents don’t want to sacrifice their own aesthetic choices for the sake of dressing their children. They want them to look cool.

Balenciaga’s childrenswear line debuted at its Spring/Summer 2018 menswear show. “We bought sneakers, hoodies, t-shirts… It’s exciting because it’s a gender-neutral kids line,” says Nasiba Adilova, co-founder of the Dallas-based childrenswear retailer The Tot, which will be stocking the line. “A lot of brands worry about maintaining their coolness and status and oversaturating the market if they launch kids. Now that Demna [Gvasalia] is doing it, for sure other brands will follow.” 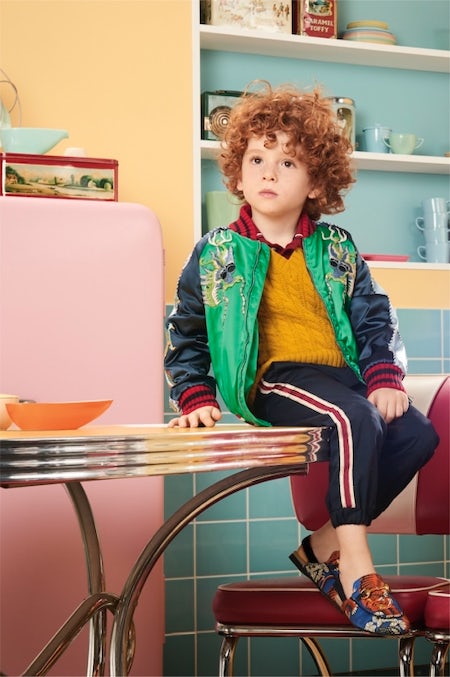 Retailers are also getting in on the trend. UK department store Fenwick of Bond Street currently has a Mini Edit pop up shop in-store: the concession has increased foot traffic to the third floor by 15 percent. Childrenswear at Selfridges is currently trading up 20 percent on 2016, with the best-selling products coming from Bape and Boy London. Farfetch has increased its childrenswear category to 184 brands, up from 40 last year, while the French childrenswear site Melijoe — for which key markets are currently US and Russia — has experienced a triple-digit sales boom for its Gucci product.

Cool kidswear is a style status, and logos matter. Jeremy Scott’s cartoonish graphics for Moschino are splayed across everything from babygrows to sweatshirts. Mini Rodini’s fourth collaboration with Adidas Originals saw the trefoil logo emblazoned across cactus-illustrated tracksuits, caps and Superstars: the partnership is one of Adidas’ most popular collaborations ever. Similarly, Gucci’s ‘fake Gucci’ t-shirt for kids sold out at Selfridges within five days: the tee retails at £85 ($112) — the adult version sells for £285 ($375). Gucci is capitalising on the mini-me trend: its childrenswear line closely follows the ready-to-wear collections and even has its own advertising campaign.

Kidswear is not a new concept; Dolce & Gabbana has offered childrenswear since 2012. But today’s kids wear sneakers, caps and hoodies, fuelled by the rise of streetwear brands. Instagram has also played a huge role in its development: toddlers are essentially following trends and the style aesthetic of adults by mixing high end designers like Gucci with street and sportswear labels. North West, for example, teamed her custom Vetements sequin dress with a pair of Vans Old Skool kicks. The appetite for sharing such content on social media is enormous: stylish kids are the ultimate statement accessory. 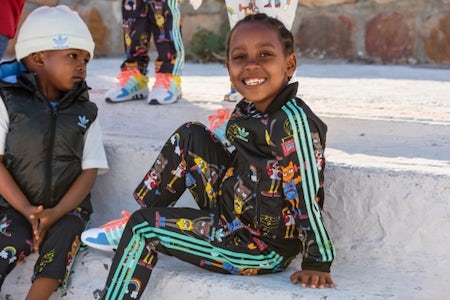 Millennial parents — who are dressing their children in the same clothes as they dress themselves — are the driving force of the industry. “Young parents with kids don’t want to sacrifice their own aesthetic choices for the sake of dressing their children,” says Moschino creative director Jeremy Scott. “They want them to look cool, like an extension of themselves.” Hypekids' managing director Christine Su agrees. "If I buy a Gucci shirt for myself I might want to buy one for my kid as well... I wish my parents dressed me the way I dress my kid."

Arguably, North West has done much to boost interest in the childrenswear sphere. Kim Kardashian — who has over 103 million Instagram followers — regularly posts photographs of North in custom wares from designer brands including Givenchy and Balmain, which is also launching kidswear this season. Givenchy’s Fortunato commented that “celebrities and friends of the house” had been asking the brand create pieces for their children and that they were responding to consumer interest by fulfilling these requests.

Such was the hype around the four-year-old’s wardrobe that Kardashian — and Kanye West — launched Kids Supply in May this year. The brand’s product is unveiled in drops similar to those practiced by Supreme and Palace, and are publicised via Instagram and Snapchat. The Kids Supply's Instagram feed is full of kiddie street style stars. “Instagram has brought the world’s influencers’ children to the forefront with their own Outfits Of The Day, which are getting hundreds of thousands of likes,” says Nathalie Genty, founder of Melijoe. “Parents are dressing their kids to be fashionable because it’s good business to do so with their digital channels. Brands understand people scrutinise the style of kids like North West — placing a dress on Instagram is more profitable than buying an advert in a magazine.” 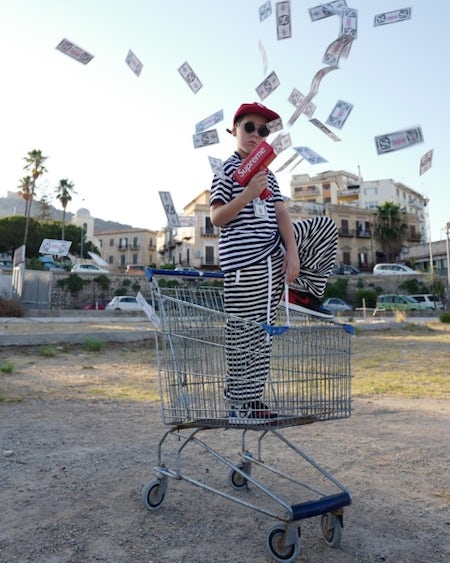 Childrenswear is a market with huge financial potential: 40 percent of millennials are parents, with a combined global spending power of $1.3 trillion, according to research by the Missouri-based creative agency Barkley US. Asian shoppers are the luxury industry's biggest consumers, and by 2025, millennials will represent 45 percent of overall luxury consumption, with Asian consumers accounting for half, according to Bain & Co: in cities such as Seoul and Tokyo, style is heavily influenced by streetwear. Coco’s parents, who run a vintage shop in the latter city’s Harajuku district, allow her to dress in designer clothes at the weekend. (That China enforced a three-decade long one-child policy until 2015 could also be partly responsible for the boom: kids Coco's age in China would have been born before the ruling was abolished.) “There is all this incredible appetite as millennials are happy to spend more money on their kids,” says Su.

Not only are millennial parents spending more on their children, but kids also grow out of clothes quickly, so there is constant demand for new items, resulting in high profitability and turnover. “I don’t think anyone is under the illusion that childrenswear is an investment proposition,” says Fortunato. “It’s not about children ‘needing’ things. It’s about the mom having fun and indulging herself… designer childrenswear is a premium area for growth,” agrees Genty.

“Men’s and women’s are at a plateau, there is only so much more brands can do,” says Hypekids' Su. The site launched in July this year. The childrenswear posts on the Hypebeast account were garnering the most interaction with its readers, thus Hypekids was born as a platform for parents who wanted to dress their kids in clothes that were "outside the box and more unique than traditional childrenswear," says Su. “Everyone from Gucci, to Marni, to Balenciaga reached out to us wanting to have their kids collections on the site,” says Su.

Today’s kids will grow up to be tomorrow’s consumers. For any brand, staying relevant across generations is the goal.

A huge part of the millennial — and streetwear — culture is limited-edition product. Often, sneaker aficionados will queue for hours for limited styles, only to keep them box-fresh and unworn to generate huge resale margins online. For these parents, it is irrelevant that their child will grow out garments worth hundreds of dollars within a few months’ time. “You don’t want to lose who you are just because you have a child," says Su. "We use our kids as an outlet to express our own creativity and as a reflection of ourselves. My son’s teacher never says he’s the smartest kid, but she will always say he’s the most stylish. I’m sort-of proud that he’s the coolest kid.”

Complex’s Park agrees. “I’m in my 30s and my friends are getting married and having kids. Sneaker culture started in the late ‘70s and early ‘80s — we lived through the time when the first Jordan or Shelltoe came out. We stood in line and purchased it. Now, I see those people becoming parents and passing the culture down to their children,” he says. For Givenchy’s Fortunato, building on the nostalgia is key to a label’s long-term survival. “Today’s kids will grow up to be tomorrow’s consumers,” he says. “For any brand, staying relevant across generations is the goal.”