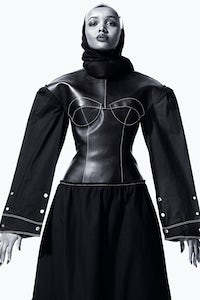 IMG signs hijab-wearing model Halima Aden who will debut at Yeezy Season 5 and in the next CR Fashion Book.

Minnesota teen Halima Aden made headlines in November when she competed in the state’s Miss USA competition wearing a hijab and, during the swimsuit portion, a burkini. “I didn’t really have modelling in mind,” says Aden, 19, who is Somali-American and was born in a Kenyan refugee camp. “I wanted to spread a positive message about beauty and diversity, and to show other young Muslim women that there is room for them.”

Now Aden’s platform is about to get a lot bigger given that she has been signed by IMG Models. On Wednesday, she will make her New York Fashion Week debut at Kanye West’s Yeezy presentation.

“I found that she was just so brave to stick to what she really believed in and yet go after the American dream of being in a beauty contest,” says Ivan Bart, president of IMG Models. While the agency has signed Muslim models in the past, Aden’s commitment to the hijab and modest clothing is unusual in the industry.

Halima is breaking boundaries of beauty and perception by being herself.

Indeed, Roitfeld has become an avid advocate for Aden, featuring her in the next issue of CR Fashion Book, hitting newsstands in March, where the model will “represent the diversity of Paris, where a mix of global cultures converge,” she says. "Halima is breaking boundaries of beauty and perception by being herself. I find this incredibly inspiring, and I know she will be an icon.” Roitfeld also advocated for Aden’s casting in the Yeezy Season 5 show.

The young model is grateful and surprised, especially since she did not have a public role model that looked like her to aspire to as a child. “That was a struggle for me,” she said.

Bart says model diversity is a IMG priority. “By representing Halima, I would hope that the next 10-year-old girl wearing her hijab right now will feel included in the experience of fashion, and know that she could do that too,” he says. “We need to reflect in fashion who we are, as a human race.” — Chantal Fernandez

London Fashion Week has paid tribute to Richard Nicoll by developing a colour in his honour. 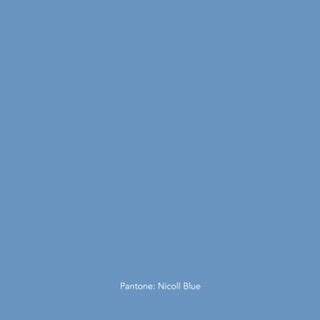 The hue, Nicoll Blue, was developed by the Pantone Color Institute and chosen by the late designer's close friends following his sudden passing in October last year.

The entrance to the London Fashion Week hub at The Store Studios, 180 Strand, has been painted in Nicoll Blue in memory of the designer after his sudden passing in October, 2016, at the age of 39.

“Richard was a designer whose talent and character inspired all around him. He registered his affinity for the spectrum of blues hundreds of times in the collections he showed in London," said Sarah Mower MBE, BFC Ambassador for Emerging Talent. "For a decade, Richard’s life-enhancing gift for bonding people together contributed immeasurably to the spirit of a whole London fashion generation. The visual presence of Nicoll Blue throughout the main fashion week venue is a way to remember and celebrate a great London friend and to convey our respects and eternal gratitude to his family.”

The colour was described as "modest and humble, yet at the same time lively and playful," by Laurie Pressman, Vice President of the Pantone Color Institute. "Richard Nicoll’s Nicoll Blue embodies the elegance and sensitive spirit of this much beloved designer.”

In addition to his own label, Nicoll's experience included freelance design for Marc Jacobs at Louis Vuitton, the creative direction of Cerruti 1881, Fred Perry and Jack Wills.

The designer, who was born in London and brought up in Australia, graduated with a Central Saint Martins MA in 2002. He won NEWGEN sponsorship in 2006 and three Association Nationale pour le Développement des Arts de la Mode (ANDAM) awards.

A minute’s silence will be observed in honour of Nicoll before the Central Saint Martins MA show on Friday February 17. — Tamara Abraham

Jil Sander has returned, once again, to her journalist roots, more than 50 years after starting her career as a fashion editor. 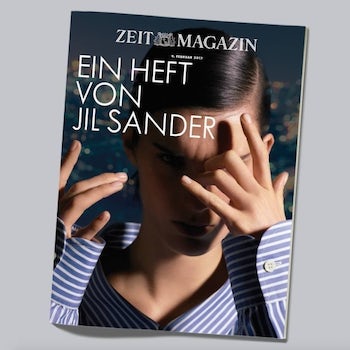 Sander, who began her a career as a fashion writer, has designed and co-edited a special edition of Germany's ZEITmagazin. Sander's vision is evident throughout the magazine, from the selection of models and photographers to the styling to the inclusion of an essay on the state of fashion today.

Sander herself is the subject of an article too, a portrait that was a year in the making by journalist Tillmann Prüfer.

"Ms. Sander's vision was to create a new view on the modern woman and to curate a photo spread that emphasises the excellence of fashion," said a spokesperson for the magazine.

This is not the first time that Sander has guest-edited a publication. In November 2015, the designer was guest editor for WELT am Sonntag, where she spent a couple of days in the title's newsroom and contributed an article of her own.

The designer's return to the spotlight comes three years after she retired from her namesake label. And it seems ZEITmagazin is not alone in celebrating her career — the designer is currently preparing for an exhibition in Frankfurt, which will open in November.

The dedicated fashion issue was released in German on Friday. An international edition, published in English will be available at the end of March. — Limei Hoang

Editor's Note: This article was revised on 15 February, 2017. An earlier version of this post stated that Jil Sander's collaboration with ZEITmagazin marked her return to journalism after 50 years. This is incorrect. Jil Sander also guest edited WELT am Sonntag in November 2015.