LONDON, United Kingdom — In a saturated and constantly changing landscape, how do you build a brand that stands apart? That was the question explored last night in the third edition of “Inside the Industry", an event series from The Business of Fashion in collaboration with Topshop, intended to connect and inform the next generation of breakthrough talent.

“It starts with product before the brand,” said Holli Rogers, chief executive of Browns Fashion. “You’ve got to contribute to the culture that you want to be a part of,” commented Leila Fataar, founder of Platform13. “Usually if it feels scary, it’s good,” said Katie White, managing director of i-D and Amuse.

The three women who sat on the panel, which was moderated by BoF’s chief commercial officer Nick Blunden at the Barbican Centre in London, were unequivocal in their advice to the 250 students in attendance and a Facebook Live audience of thousands. The group described how the nature of branding and marketing has shifted in media, retail and publicity. Their message was clear: before you can build a brand, you need to have the right product and a vision of where it fits within a wider culture.

“People will forgive all of your sins if you get [the product] right,” said Rogers, who joined Browns in 2015 as part of its acquisition by Farfetch. She was previously the fashion director of Net-a-Porter, working with the e-tailer since its novice years in the early 2000s. “I had always worked in online, so it was a challenge to understand the brick and mortar world,” she continued. When she joined, Rogers oversaw a major re-branding of the company, including its logo, packaging, merchandising and digital platforms. “It goes back to: how do you shake up something that has existed for almost fifty years and make people take note again? Who’s your customer and who are you trying to appeal to? But also what do you want it to be? It’s taking all of those elements and mashing it together.”

Everyone is talking about influencer marketing but in fashion, we’ve been doing that forever — it’s called collaboration.

Having started out working in advertising agencies and specialising in digital branding, Katie White joined i-D in 2015, a few years after it was acquired by Vice Media, with the view to build the style magazine’s digital platforms and brand partnerships. Most recently, she masterminded a year-long partnership with Chanel to market its fragrances to a younger audience and create branded content that felt sincere to the tone of the magazine.

“For me, so much of brand success is about cultural relevance,” said White. “The big challenge for brands that we come across, is that the lifecycle of what is relevant is speeding up.” White outlines two key challenges that major brands are facing. “The first challenge is the technological aspect of their platforms and the second is that brands may have lost their relevance in culture, perhaps because they’re telling too much of the heritage story, or they’ve got things slightly wrong in terms of which subculture they’re trying to market to.” 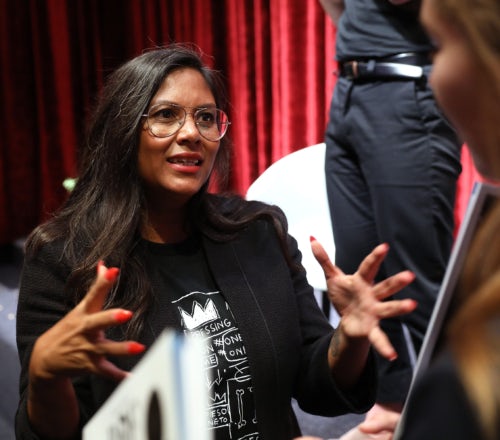 “I think it’s challenging because it used to be really straightforward — you’d have a marketing team and a brand team and you’d do ads for TV, print and a website,” added White. “Now you’ve got big complicated, multifaceted teams that are trying to get a brand out there, which is challenging.”

So, how can one navigate a congested marketplace and cut through the noise to build a powerful brand?

According to Leila Fataar, the key is to collaborate and create. “You don’t need many people — perhaps it’s one amazing photographer — and if you can create something amazing, it will be shared,” she said, adding that 84 percent of online conversations happen outside of social media. “Everyone is talking about influencer marketing but in fashion, we’ve been doing that forever — it’s called collaboration. What happens now is that we’re paying people to advertise for us, but it’s not influence because that comes from combined expertise.”

Fataar, who grew up in Apartheid-era South Africa, moved to London in her early 20s, and found a job by walking into a hair salon and picking up the ringing phone (it belonged to Toni of Toni & Guy). At the age of 26, she launched her first public relations agency. In 2012, she became global director of social media and public relations for Adidas Originals. Her first project was the relaunch of the Stan Smith trainers, which became one of the German brand’s biggest success stories.

The “Green and White Takeover” campaign saw Fataar launch the trainer by monogramming the faces of one hundred influential people around the world onto the tongue, in the space where Stan Smith’s visage usually sits. They were delivered to the people on the same day, causing a social media sensation. Adidas hoped to sell 30,000 pairs in the first year, and ended up selling over a million. “At the time, [the sneaker market] was so tech-heavy and all about bright colours and Nike performance shoes, and I had this clean white shoe,” she recalled. “What we needed to do was take the heritage [of Adidas] and revive it to make it relevant. Heritage is amazing but people can depend on that too much. What are the learnings and insights from that and how do you switch that up?”

The discussion ended with Nick Blunden asking the panel, “What is one word you would use to describe someone who will be successful in fashion?”

“Enthusiastic,” said Rogers. “Curiosity,” answered White. “Passion,” said Fataar. “Without passion, you can’t be enthusiastic or curious, and it works the other way around.”

How to Build a Career in Fashion

5 Lessons on How to Build a Business in Fashion