Is Fashion Ready for a New Aesthetic?

LONDON, United Kingdom — Instagram, Barbour, vinyl records, artisanal butchers, moustaches, and the biography of your potatoes lovingly detailed on chalkboard signs at Whole Foods. What is wrong with this picture? As London-based writer and entrepreneur Russell M Davies puts it, “most of Shoreditch would be wandering around in a leather apron if it could. With pipe and beard and rickets. Every new coffee shop and organic foodery seems to be the same. Wood, brushed metal, bits of knackered toys on shelves. And blackboards. Everywhere there’s blackboards.”

For the last few years, the stylistic purview of much of the creative class in places like Shoreditch in London, the borough of Brooklyn in New York, and Berlin’s Mitte district has been curiously backward-looking. Perhaps this retreat into retro nostalgia is a reaction to economic uncertainty and technological change. Maybe it’s a craving for what we imagine were simpler times or a search for authenticity in a world that is increasingly artificial. Whatever the reason, the backward-looking trend extends to fashion, as well. In fact, perhaps more than any other design discipline, fashion is engaged in an intense dialogue with the past. “There’s so little innovation in fashion in its current state,” Susanna Lau, widely known as Susie Bubble, told BoF. And indeed, from Belstaff to Moynat to Schiaparelli, reviving dusty heritage brands is undoubtedly the business model du jour.

But over the past year, a loose group of creatives in London’s East End have given birth to a counter-narrative to the growing tide of heritage and nostalgia, examining the reality of our increasingly artificial and technology-mediated world head-on. Known as “The New Aesthetic,” the movement was born last May with a blog post by London-based writer and technologist James Bridle, who began collecting found images at new-aesthetic.tumblr.com that dealt with the “eruption of the digital into the physical world” and the idea of “seeing like a machine” in an attempt to capture and communicate the possibilities for a more contemporary visual culture. Subjects included everything from glitches in Google Maps to photographs from military drones in Afghanistan and the techno-organic forms of contemporary architecture that betray traces of the computer-aided design (CAD) programmes used to create them.

The movement really struck a chord and came to wider attention at this year’s SXSW Interactive conference where Mr Bridle led a panel called “The New Aesthetic: Seeing Like Digital Devices” and futurist Bruce Sterling asked what the New Aesthetic meant for fashion in his highly-anticipated closing address. “Although SXSW people do look chic, it’s a rather retro look,” he challenged the tech-savvy audience in attendance. “They don’t actually look very futuristic. I would suggest, when you come back next year…come back in robotvision glitchcore!”

In fashion, a growing number of designers have embraced the digital prints revolution. But which designers, imagemakers and fashion editorial outlets are actually producing “New Aesthetic” work that actively engages and deals with our digitally-mediated world?

Low-resolution pixilation is a major New Aesthetic theme and was perhaps most elegantly used in Preen’s Spring-Summer 2012 collection, which features romantic floral prints processed by a computer. 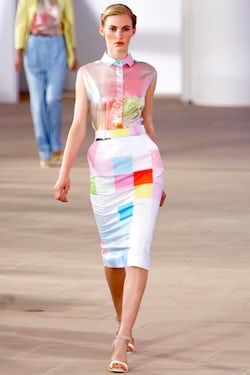 Both Gareth Pugh and United Nude have borrowed from videogames, producing blocky geometries that reference “voxels,” volumetric pixels once used in constructing videogame environments. And Arnhem-based Dutch designer Iris van Herpen has made what is surely fashion’s most beautiful and radical use of digital imaging technology with her Photoshop-designed, 3D-printed polymer dresses, which play with the tension between digital and organic forms.

The moment when technology reveals itself through digital glitches and errors is another major theme in New Aesthetic imagery and something that has appeared in the work of Australian fashion designer Josh Goot who has made particularly striking use of digital prints that tend towards noise and distortion. While Goot’s process is carefully controlled by the designer, Philip Stearns’ Glitch Textiles project uses short-circuited cameras to auto-generate colour patterns that are then woven into blankets, with hypnotic and beautiful results.

Amongst fashion imagemakers, Brooklyn-based Pamela Reed and Matthew Rader, working under the name Reed + Rader, have worked extensively with animated GIFs, producing fashion stories for magazines including V and are currently working on a project called Pyramid Hill, a 3D world for which the duo leveraged a videogame level-builder called the Unreal Engine to create an immersive, interactive environment. 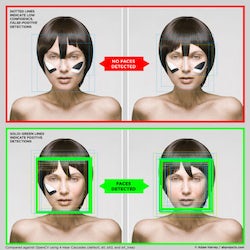 How to Hide from Machines | Source: CV Dazzle

Perhaps fashion’s most overtly “New Aesthetic” magazine is DIS, edited by Lauren Boyle, Solomon Chase, Marco Roso, Nick Scholl and David Toro. In a landmark example of New Aesthetic work in fashion, the magazine recently collaborated with Adam Harvey to create a radical beauty story based on CV Dazzle — styling techniques that use asymmetric make-up, hair and accessories to disrupt facial recognition algorithms — entitled “How to Hide from Machines: The perilous glamour of life under surveillance.”

“We need to see the technologies we actually have with a new wonder,” wrote James Bridle in his first essay on the New Aesthetic. Digital methods of image research, image editing and production have quickly become embedded in the fashion industry, but the possibilities for digital creativity have yet to be fully explored. “It’s still not something people are consciously thinking about,” said Ms Lau.

As a term, “The New Aesthetic” may be short-lived. Surprising many, James Bridle shut down the New Aesthetic Tumblr ten days ago, exactly one year after it was launched. But if the “New Aesthetic” movement is already dead, this is surely only the beginning of digital technologies impacting the way fashion creatives think, see and design. Indeed, the generation of students just starting to arrive in fashion schools have only ever known a world that’s mediated by digital technology and learnt to process visual culture through a ceaseless digital stream of appropriated and juxtaposed images.

Jay Owens is a social media and technology researcher based in London.