TORONTO, Canada — These days, it’s not uncommon that a weekly trip to the local supermarket for milk, cereal and bread might involve coming home with a coat, dress or pair of jeans. Since 1990, when British supermarket chain Asda launched George, the world’s first grocery store clothing label, companies like Tesco and Sainsbury’s have followed suit, capitalising on well-established relationships with their customers, who visit regularly for weekly food shopping, to expand into non-food product categories including apparel. But perhaps no supermarket-born fashion brand has been quite as successful as Canada’s Joe Fresh.

Launched in 2006 by Toronto-based food distributor Loblaw Companies Limited, the fashionable and highly affordable Joe Fresh is now sold at over 300 locations across Canada and has expanded beyond its humble supermarket beginnings, operating 18 standalone stores, including a flashy, 14,000-square-foot flagship on New York’s Fifth Avenue. At the store opening last March, the city’s mayor, Michael Bloomberg, called the brand “the greatest Canadian export since Justin Bieber.”

Indeed, Joe Fresh is Loblaw’s most well-known proposition and has since expanded from adult apparel into additional product categories like childrenswear and beauty, both of which are top performers. And although, Loblaw (which generated over $30 billion in 2011 sales revenue) does not break out financials for Joe Fresh, analysts say the brand is close to doing $1 billion in annual sales.

But how has Joe Fresh, which began life as a private-label supermarket brand, been able to achieve such striking success?

Perhaps the most important factor was the magic touch of the man Loblaw installed as creative director: Joseph Mimran. Already consulting with the company on home products, the designer and entrepreneur had a strong track record of building successful fashion businesses, including Club Monaco, which he founded in 1985 and later sold to Polo Ralph Lauren for $52.5 million. 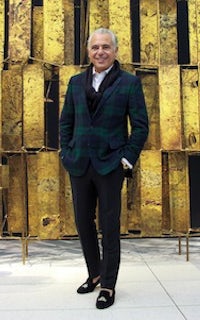 Mimran’s first collection for Joe Fresh featured clean, easy-to-wear, classic styles in “bright and tasty colours” to reflect the grocery store environment. Debuting at 40 suburban Real Canadian Superstore and Atlantic Superstore outlets, the line attracted an overwhelmingly positive response. Canadian fashion veteran Lisa Tant, then editor-in-chief of Flare magazine, wrote that her team was “raving about how great the line of more than 350 pieces looked and how amazing the prices were — everything was less than $40 and the average piece was just $13.” Interestingly, Mimran also decided to display prices in round numbers, rather than following the supermarket industry’s practice of subtracting a penny from prices to make products seem cheaper.

Indeed, Mimran’s vision for the company extended beyond product to a fittingly fresh new brand story. His campaign imagery, featuring smiling models (including a number of fashionable ‘it girls’) in bright outfits set against clean white backgrounds, helped to give the brand a distinct point of view: stylish, modern, cheerful and upbeat. Later, this worldview would be reflected in store designs featuring a palette of crisp white, clear sandblasted acrylic and natural oak that highlighted the colourful aesthetic of the product.

“Brand integrity is huge,” Mimran tells BoF. “It means people can relate to the brand and understand the brand and are more likely to embrace it.”

The added convenience of being readily available during weekly trips to the grocery store certainly didn’t hurt either. Indeed, over 14 million Canadians shop at Loblaw supermarkets each week. And when the company began launching standalone Joe Fresh stores — first, in 2010, in downtown Vancouver; and then in suburban towns in the provinces of Ontario, Alberta and Quebec, where its grocery stores were already wildly successful — it wasn’t a stretch to imagine that shoppers would follow.

But international expansion was another matter. “I said I’d like to open some freestanding stores in the US as a basis for exploring the international market,” says Mimran. Loblaw and Joe Fresh were unknown in the US. But Mimran decided to test the market with what proved to be a successful temporary store in East Hampton, an upmarket summer enclave two hours drive from New York City. Permanent outlets at Bridgewater Commons in Bridgewater, NJ and Roosevelt Field in Garden City, New York, soon followed. Then came a 9,800 square foot store in New York City’s Flatiron District and, in early 2012, the Fifth Avenue flagship, which was preceded by a national television spot and wall-to-wall billboard and print advertising campaigns.

“What prompted the decision to go into New York was the fact that we had great success in Canada and New York is where international players go to compete,” says Mimran. “But entering the US is challenging. It takes time to get your bearings — and that’s true for any brand.”

The US experiment seems to have worked. Last July, Joe Fresh signed a partnership with American department store JCPenney and, in April 2013, plans to roll out nearly 700 dedicated Joe Fresh shops, ranging from approximately 1,000 to 2,500-square-feet, within newly renovated JCPenney stores, providing the Canadian brand with a platform for reaching millions of new American customers. Joe Fresh will also make its e-commerce debut on JCPenney’s website.

The partnership will start with women’s apparel, but could soon include a broader offering, including beauty, accessories, footwear and men’s apparel. Says Mimran: “It’s about balancing a mature business in Canada with a start-up in the US.”

And perhaps other international markets, as well. The Weston family (the second richest in Canada), which has a controlling interest in Loblaw, includes W. Galen Weston, chairman of the Selfridges Group, which operates a number of major European department stores, including Selfridges in the UK, Brown Thomas in Ireland and De Bijenkorf in the Netherlands. No relationship currently exists between Loblaw and these retailers, but who’s to say this may not change in the future.

For Mimran, “the biggest challenge is to stay relevant, stay fresh, and keep producing amazing product,” he says. “In our business, it’s critical to not get left behind.”

Rebecca Tay is a Canadian fashion writer and editor based in London.