J.W. Anderson spent two years working with The Hepworth Wakefield on 'Disobedient Bodies.' Here, he tells Tim Blanks about 'crossing lines of creativity' and how today's political climate has lent an unwitting timeliness to the exhibition.

J.W. Anderson spent two years working with The Hepworth Wakefield on 'Disobedient Bodies.' Here, he tells Tim Blanks about 'crossing lines of creativity' and how today's political climate has lent an unwitting timeliness to the exhibition.

WAKEFIELD, United Kingdom — Years ago, after Issey Miyake had presented yet another of his genre-busting fusions of clothes, music, dance, whatever they were, I presumptuously challenged him about his conviction that fashion was not an art form. His customary diffidence spilled over into irritation. “Clothes, clothes…,” he insisted cryptically. Not sculpture, not oil on canvas. Just cloth. Something to wrap the body in, form dictated by a functionality that nullified the higher calling of “art.”

Jonathan Anderson, who claims Miyake is his favourite designer, used to feel the same way. Then he spent two years curating "Disobedient Bodies," which opened on Saturday at the Hepworth Wakefield, the temple to contemporary British art that David Chipperfield designed in Yorkshire. “Working with so many amazing pieces in fashion and art, I’m completely converted,” Anderson said before the show opened to the public. “What Yohji Yamamoto does is just as important as Barbara Hepworth. You can achieve sculptural form in clothing.”

Anderson’s comparison will rankle purists, but "Disobedient Bodies" makes his point for him in an extremely convincing way with its juxtapositions – startling, seductive, playful, provocative – of works of art and pieces of clothing. In the past, Anderson has called himself as much a curator as a designer. His passion for the artisanal has been obvious in the 12 collections he designs each year for Loewe and his own label – he’s drawn on them for this exhibition — and in his Shoreditch space J.W. Anderson Workshops. Here, it lights a fire under the show. 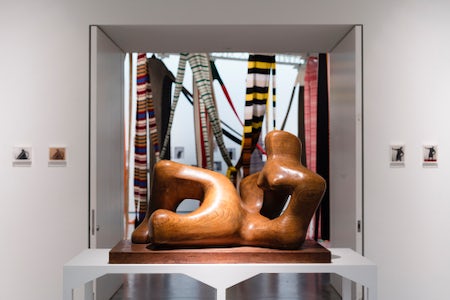 The idea for "Disobedient Bodies" was born when Anderson’s reported enthusiasm for Barbara Hepworth’s work popped up as a Google alert in Wakefield, at the same time as the gallery was mulling over cross-disciplinary collaborations that could animate its permanent collection.

Andrew Bonacina, the Hepworth Wakefield’s chief curator, was, said Anderson, his guide and teacher as the exhibition took shape. Bonacina compared the process to the surrealists’ game of Exquisite Corpse. “Jonathan would say something, and I’d throw in something else.”

There are over 100 objects in the show. “And we were talking about every single one of them as a body,” says Bonacina. “One hundred bodies in conversation, happy, awkward, arguing, hating each other.” The last two aren’t really in evidence. In fact, the bodies seem much more compliant than disobedient (even if the notion of contrariness is sexier).

The first object you encounter is Henry Moore’s "Reclining Figure," a ravishing wooden sculpture from 1936. Mere feet away is a cone dress by Jean Paul Gaultier, arranged on a similarly recumbent shape, as pure and abstract a form as Moore’s. It’s near a video of Martha Graham’s extraordinary 1930 dance piece "Lamentation," in which the choreographer performed inside a long tube of fabric which abstracted her silhouette. To watch it, you’re encouraged to sit in a tubular steel-framed chair called "The Non-Conformist," designed by Eileen Gray in 1926.

It’s easy to imagine the radical impact of the sculpture, the choreography, the furniture design at their moment of creation. “But what was radical then is classical now,” Bonacina notes. “The idea of hindsight is interesting.” Funny thing is, it works the other way with the Gaultier dress. Everyone knows the silhouette because of Madonna. It’s a fashion “classic”, but in this context it becomes radicalised. That curious side-effect is what distinguishes "Disobedient Bodies" from other recent exercises in art/fashion recontextualising like, for instance, Dries Van Noten’s majestic "Inspirations."

One hundred bodies in conversation, happy, awkward, arguing, hating each other.

Variations on a question posed by Bonacina — “What would it be like if you saw a Gaultier in the form of a Henry Moore?” — are at the heart of the show. Padded pieces of clothing from Rei Kawakubo’s 1997 “lumps and bumps” collection for Comme des Garcons lie like boulders on the floor around a sculpted Brancusi head from 1912 (and another dance video, this time Merce Cunningham’s company performing in outfits from the same Comme collection). An Yves Saint Laurent black chiffon column from 1969 with a copper corset moulded on the body by sculptor Claude Lalanne sits opposite an abstract piece called "Perforated Torso" by the late and little-known Slovak sculptor Maria Bartuszová, which calls to mind curves of the body, folds of skin. There’s a Yohji Yamamoto coat with a bustle next to a William Turnbull bronze whose curves also suggest a bustle. A collection of Helmut Lang harnesses line the room where shapes by Alberto Giacometti, Louise Bourgeois and Barbara Hepworth claim space. A group of black neoprene tops by Anderson occupy an alcove with black pieces by Sara Flynn, an Irish ceramicist whose work he loves. 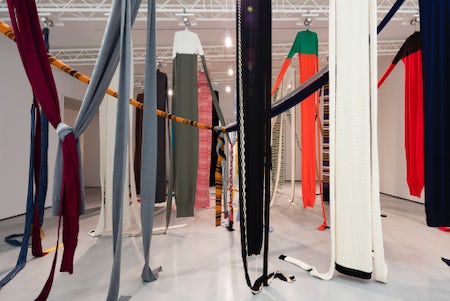 It all makes what Anderson calls “crossing lines of creativity” look logical, and refreshingly accessible. “People in the art world are scared to bring things together that look good, because it’s almost dumb,” says Bonacina. “But that’s what Jonathan the fashion designer coming into the art world can bring. Fashion is more democratic as a craft or an art form, because you have to engage with it in some way. With art, there’s an intellectual bubble. We see it when local people come into the gallery. They’ll look at a Hepworth or a Moore and they’ll say, ‘I like it but I don’t get it’. But with clothes, they would be able to say why it’s interesting or why it challenges them.”

“In an institution, you often end up toeing the line more than you want to,” Bonacina concedes. “So doing something like this means you shake it up. When you play something against a piece of fashion, you see it in a new light.”

There are no labels on any of the exhibits. A detailed text is available on entry, but Anderson and Bonacina liked the idea of encouraging a more immediate physical, visual reaction to what’s on show. You’re as free as you please to find your own poetry in all the conversations.

The exhibition has been designed by London-based architects 6a as a set of curtained-off rooms, which gives a sense of almost domestic intimacy, fostered by the fact that a lot of the objects are exhibited on tables, rather than the more usual gallery plinths. Even if you’re still not allowed to touch them, they at least feel more accessible, a part of the new way of seeing that Bonacina talks about. And there is, at least, one room where 28 jumpers with surreally elongated sleeves of brilliantly coloured knit beg for your entanglement. This is the bit you could imagine kids getting caught up in, sowing the seeds of a future in fashion.

In his speech at the pre-opening dinner, Anderson mentioned the way the world had changed in the course of the two years he worked on "Disobedient Bodies." The new populist/political mood seeks to isolate rather than engage. It’s the opposite of every humanist impulse that art and fashion stand for, and it must be resisted. In light of which, the idea of disobedient bodies lends Jonathan Anderson’s exhibition an unwitting timeliness. Significance too. “Art is looking at fashion, fashion is looking at art,” says Anderson. And together they offer a new way of looking at life.

Disclosure: Tim Blanks travelled to Wakefield as a guest of J.W. Anderson.