In today's News Bites, Loewe pays musical tribute to the White Island, while Erdem Moralioglu announces a collaboration with H&M.

Loewe will today release a 12-inch vinyl in collaboration with Soulwax and Michel Gaubert.

Jonathan Anderson’s parents used to have an apartment in Ibiza, so some of his most impressionable summers were spent goggling at the goings-on in such temples of e-soaked hedonism as Manumission. The Andersons let their boys off the leash early. But that meant when Jonathan came to Loewe, his visions of Spain were shaped by Balearic bliss, not by bullfights, or haute bourgeois Madrid. That higher state of consciousness has helped turn the 173-year-old house into a hotbed of sunny sensuality, quirky craft and idiosyncrasy that often borders on the Dali-surreal. And now it has a soundtrack.

Anderson is obsessed with curation. It’s determined the shape of his work — and his life. So adding a 12” vinyl object to the many other elements he’s drawn into his orbit at Loewe completed a circle. He’s giving credit for the actual curating to his soundtrackist Michel Gaubert, who brought in Belgian DJ duo (and longtime Ibiza aficionados) Soulwax to create a track called "Close to Paradise," the kind of subtly uplifting anthem you imagine playing as the sun sets over the Café del Mar. It evokes the prelapsarian moment on the White Island before the charter flights started disgorging planeloads of party-crazed visigoths. Four denizens of those early days murmur about their experiences over the gentle pulse of the music. “People who are rooted in what we know of Ibiza today,” Anderson calls them. 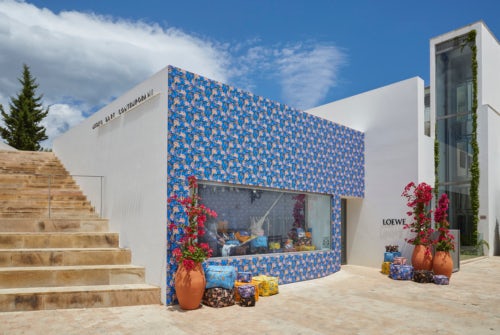 One of his own early memories was the boutique Paula’s Ibiza, the inspiration for a capsule collection for Spring/Summer ’17. Loewe is launching the 12” with a party on Friday night at the island’s Museu d’Art Contemporani (digital downloads follow on iTunes and Spotify in August), and a pop-up of Paula’s archives from the 70s. The boutique’s founder Armin Heinemann will also have massive baskets of old stock so everyone can play dress-up.

“Ibiza is one of those places you can let go and experiment with something you’re not,” says Anderson, with gleeful anticipation. “You feel anything is possible. That’s how I feel about Loewe. There are no boundaries. And there aren’t many brands where you could do this.” Which, as the Ibicencan sun rises on Saturday morning over Loewe's all-night party people, will surely seem like an understatement. — Tim Blanks

Erdem Moralioglu is the latest designer to announce a collaboration with H&M.

The Canadian-born, London-based designer, whose designs are worn by celebrities and royalty alike, has developed collections for both men and women, to go on sale globally in H&M stores and online on November 2.

“I am so happy to collaborate with H&M, and to explore my work on a whole new scale including a menswear collection which I have never done before," Moralioglu said in a press release announcing the partnership. "It’s also such a thrill to work with Baz Luhrmann, one of the most important storytellers of our time.”

The collection is set to be a celebration of some of the designer's most well-known themes. Meanwhile, Moulin Rouge director Baz Luhrmann has directed a teaser film for the collaboration, which was released on YouTube Thursday afternoon.

“For me fashion is always about more than just clothing, it is a form of expression - a stand alone art form," said Luhrmann. "I am excited to be collaborating with Erdem and H&M to reveal the story of this unique collection.” — Tamara Abraham