DUBAI, United Arab Emirates — “We’re not in the business of defining what modesty is because it’s a very personal thing,” says Ghizlan Guenez, founder and chief executive of TheModist.com. But living in the UAE for the last 20 years has given 38-year-old Guenez, from Algeria, an intimate understanding of her target market.

When The Modist goes live this week, the Dubai-based e-commerce site will offer 75 contemporary designer brands to women whose religious, cultural or personal tastes lean to a modest style aesthetic.

“There is literally a market segment that hasn’t been catered for,” says Lisa Bridgett, the former director of global sales and marketing at Net-a-Porter who Guenez recruited to take over as chief operating officer at The Modist. “We would love to own this space.”

Guenez’s new venture follows the launch of other Middle East-based e-commerce players, though most are not curating product exclusively for the modesty segment. Al Tayer, one of the largest luxury retail groups in the Middle East and joint-venture partner for the likes of Alexander McQueen, Stella McCartney and Giorgio Armani, unveiled its new multibrand digital luxury offering in December last year, Ounass.com

Following shortly will be Noon.com, the e-commerce platform slated to rival Amazon, which is launching with $1 billion of funding split between Saudi Arabia’s Public Investment Fund and Mohamed Alabbar, founder of Emaar Properties and Emaar Malls, which owns The Dubai Mall, plus a group of investors from GCC (Gulf Cooperation Council) countries. Noon.com will sell 20 million products from the world’s largest warehouse of its kind.

Net-a-Porter reports that average order value in the Middle East is 50 per cent higher than the rest of world.

Khalid Al Tayer, chief executive of retail at Al Tayer Group, says, “We researched the market extensively before embarking on our digital journey [with Ounass.com]. We recognise that digital retail in the Gulf region is between 1-2 percent of current spend, while it is 15 percent or more in mature markets. This presents a phenomenal growth opportunity in this space and likely to represent a significant portion of growth in the retail sector over the coming years.”

Net-a-Porter reports that average order value in the Middle East is 50 percent higher than the rest of world, so it is little surprise that 11 months ago Alabbar’s Symphony Investments announced a joint venture with Yoox Net-A-Porter Group (YNAP), which will see Alabbar focus his entire online luxury retail activity in the GCC exclusively through the joint-venture, of which Symphony Investments owns 40 percent. Off-price brands Yoox and The Outnet are set to debut localised sites in the region in 2018, while Net-a-Porter and Mr Porter will launch in 2019.

The Middle East accounted for three percent of global luxury consumption in 2015, according to a report by Bain & Company for Fondazione Altagamma, and is expected to significantly outpace the growth of the global luxury goods market in the next five years, according to YNAP. Seen together with the far-reaching potential of e-commerce in the region, the current environment creates a perfect storm for local online luxury propositions to be taken more seriously.

Up until now, international players including Net-a-Porter, Matchesfashion, Moda Operandi, Shopbop and at the mass end, UK-based Asos, have gradually been increasing their focus on the region, offering the likes of Arabic-language customer support and personal shopping, and regionally-relevant holiday promotions around key shopping periods such as Ramadan and Eid.

Guenez, formerly a director at UAE-based private equity firm Abraaj Group, believes that The Modist is poised to harness local insights, leveraging Dubai’s geographic sweet spot between east and west, to create a global offering for a customer base that has largely been ignored. 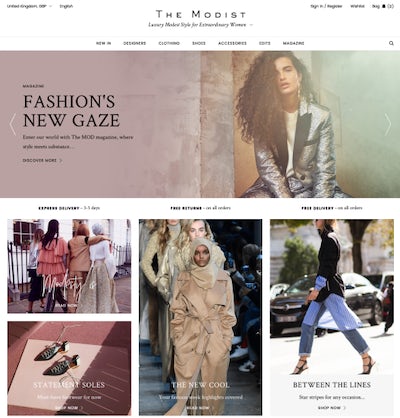 “You get to understand the depth and the nuance of what the customer needs and how her needs haven’t been taken care of,” she says. “We are talking to a woman who dresses modestly, is modern, but she loves fashion. She’s educated, she travels; she’s got these boundaries that she espouses.”

Guenez believes that the best way to evaluate the size of the modest fashion segment, “is to look at the Muslim market,” which is expected to reach around $484 billion by 2019, according to the 2014-15 Thomson Reuters State of the Global Islamic Economy Report, with Europe and the USA making up 17 percent; Turkey accounting for 30 percent; 34 percent coming from the Middle East, notably Saudi Arabia and the UAE; and Asia totalling 18 percent, with Indonesia and Singapore dominating.

“That was the premise on which I decided to do an online platform and make it global,” Guenez, herself Muslim, explains. “We want to speak to the woman in Brooklyn, the woman in Malaysia and the woman in Istanbul.”

For her part, Bridgett believes that the modesty category is larger than most market estimates. “Modesty is not akin to Islamic fashion only. It crosses cultures and creeds, and speaks to values and a sense of style in which women want to dress,” she says. “So in a sense [we] are understating our belief in the market potential.”

Based in Dubai’s D3 design district, with a satellite office in London and global agency support, The Modist expects first year revenue to be split 50/50 between the Middle East and the rest of the world. “Dubai is a very nurturing environment for entrepreneurs,” Guenez explains of her decision to be headquartered in the UAE.

“The strategically beautiful thing about Dubai is that you can service Europe, America and anywhere else with ease.” At launch, The Modist will ship to 120 countries with DHL serving as the global distribution partner. Initially in English, an Arabic language option will be added soon after launch, potentially followed by Asian languages.

Guenez points out that there are 630,000 luxury modest fashion search terms globally per month, with the UK market indexing the highest. She forecasts that the site’s social channels will drive approximately 30 percent of revenue in the first year, reflecting the dominance of social engagement and commerce in The Modist’s target markets and a rising wave of influencers speaking to the modest fashion movement.

“The modest dresser in Kuala Lampur is seeing how the modest dresser in New York is dressing. There’s a whole constituency of women who are strong, who are educated, who are in the workforce, and social media is the place for different dialogues to co-exist,” she says.

The 30-strong team at The Modist includes fashion and buying director Sasha Sarokin, former buying manager at Net-a-Porter, and creative director Sally Matthews, previously fashion and beauty director of Harper’s Bazaar Arabia. Their remit is to curate and style brands such as Ellery, Peter Pilotto and Marni in a way that reflects the modest proposition — long hemlines and sleeves and clever layering — using regional insights to target a global audience.

Conversely, Al Tayer’s Ounass is broader in that it does not focus exclusively on modest fashion. However, it has invested a lot in the local Gulf markets, operating in the UAE, Saudi Arabia and Qatar with two-hour delivery in Dubai and same-day in the UAE. Serving as a digital sister to the firm’s UAE- and Kuwait-based bricks and mortar department stores, Harvey Nichols and Bloomingdale’s, Ounass sells 200 luxury women’s fashion brands; a mix of international behemoths such as Gucci alongside exclusive capsules by regional designers. 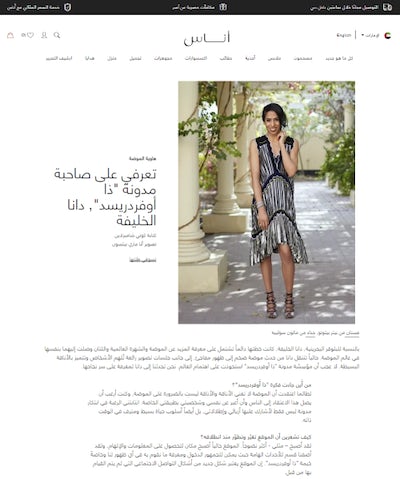 “Ounass’s main competition are the pure players serving the region from Europe and the US. Where we differentiate ourselves, though, is through a keen understanding of our consumers’ preferences and tastes and with a speed of fulfilment unmatched by any local or international competitor,” says Al Tayer.

Mohamed Al Fayed, senior vice president of Al Tayer Retail’s Omnichannel division, which employs 100 staff, adds, “There has been evidence of strong demand coming from suburban cities where we don't currently have brick and mortar operations. This shows that there is a strong demand for luxury retail previously underserved due to the lack of major malls.”

With retail prices for fashion in the Middle East typically higher than those accessible online from international e-commerce players, Ounass has introduced a price match guarantee to level the playing field, “that ensures our customer receives the same price she would receive from any local or international competitor serving our region,” says Al Tayer.

“Over the next decade we will predominantly see digital channels as one of the primary drivers of growth in this sector and retailers recognising this and investing early on will reap the benefits as the region leapfrogs to maturity,” he continues.

There has been evidence of strong demand coming from suburban cities.

Middle East-based retailers may have been slow to react to the international e-commerce invasion but are now accelerating efforts to compete in the digital space, which could result in regional brands dominating. Earlier this year, Amazon reportedly walked away from a potential $1 billion acquisition of Souq.com, currently the region’s largest e-commerce business.

Meanwhile, Rocket Internet-backed Namshi, a Dubai-based e-commerce business selling women’s, men’s and childrenswear by the likes of Topshop, Mango, Adidas and Nike, plus beauty brands, alongside its own collections, achieved profitability in the first six months of 2016, posting operating profit of €1.6 million ($1.69 million) for the period, reversing previous losses.

But now, all eyes are on Alabbar’s Noon.com to see whether it, like Alibaba in Asia, can dominate the region, and on new players like Guenez who aim to go global from the get-go.