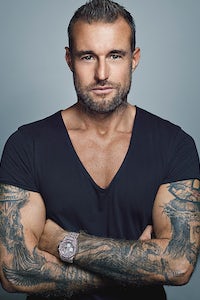 LONDON, United Kingdom — Fashion brands know how to protect themselves. This is the view of designer Philipp Plein, who took to Instagram earlier this week to address legal accusations from Dolce & Gabbana, who claimed his company was poaching employees from one of its Milan stores.

“These people, these brands, they don’t want competition. They know how to protect themselves. Everybody does that. When you have a monopoly, you don’t want anybody next to you eating from your cake. This is what is happening in this industry,” he says, speaking at the opening of his new store on London’s New Bond Street on Thursday.

“In this competitive moment, everybody is trying to survive,” he adds. “I’m not an enemy and I’m not a bad person, and I’m not trying to catch the others or to steal the people.”

Plein, whose namesake fashion brand has built a significant retail presence of 120 stores globally over the past five years, shared an Instagram photo on Monday of a letter he had received from Dolce & Gabbana’s lawyers “accusing me and my people that we would steal their employees.” His post had generated 6,790 likes and over 500 comments at the time of publication.

The suggestion from Dolce & Gabbana that Plein was “stealing” its employees is an industry-wide practice Plein maintains is lawful and fairly standard across fashion and other sectors.

“I don’t think we did anything wrong, ” says Plein. “I think that this was a kind of provocation to send us a letter like this without a legal base, because we didn’t hurt any law.”

Lawyers representing Dolce & Gabbana sent Plein a letter detailing his company’s attempts to poach around 10 employees, most of whom were identified as working at the Italian fashion brand's flagship store in Milan. A spokesman for Dolce & Gabbana declined to comment for this article.

In the letter, Dolce & Gabbana’s lawyers said that from the second half of October 2016, the company discovered that Philipp Plein International had contacted employees of Dolce & Gabbana. The letter then stated that two former employees, who now work for Plein, have been in touch with current employees at Dolce & Gabbana to persuade them to take a new job at Philipp Plein's new store in Milan, which is expected to open in January 2017.

Dolce & Gabbana’s lawyers say the employees reportedly approached by Plein's staff hold senior positions, and that this level of professional would boast significant experience, as well as relationships with key clients whose loyalty and revenue mean a great deal to the company.

These sorts of situations are very common, particularly in creative industries or financial services, says Jim Lister, principal lawyer of business at Slater + Gordon, one of Britain’s largest law firms. "In these industries in particular, employers usually put restrictive covenants in the contracts of their senior people, to try to stop this sort of activity.

“In reality though, it can be very difficult to enforce these clauses," he adds. "Ultimately, people have a right to work wherever they like, and it is very easy to evade these clauses, simply by placing adverts, telling the targets that they should apply and waiting for individuals to apply to them. It can be very difficult to prove in reality that anyone subject to the restriction actually contacted employees and tried to persuade them to leave.”

In Italy, there are laws that protect companies and their knowledge including non-compete laws, wrote Instagram user Penelopebix, an Italian lawyer based in Switzerland, in the comments below Plein’s post. “The law is designed to protect what you learned in a place thanks to the company in which you work."

The problem is not the letter, she continued. “Did you break the law? Did the people now working with you and previously in Dolce & Gabbana break their [paid] agreements? If yes, this lawyer is making his job reminding you that this is not possible without paying a compensation to [the] previous company you are damaging.”

Lister says what Dolce & Gabbana have sent is what appears to be a "letter before action", a document that sets out the basis for a proposed claim, usually asking the recipient to stop whatever they are doing that is said to be unlawful. Generally, if there is no response, legal proceedings are sometimes commenced, but by no means always — this sort of letter can often be an empty threat and proposed action is not always carried through.

If this were a case in the UK, however, it would be possible that Dolce & Gabbana would have a legitimate legal claim, Lister notes. "If the new employer knows what is going on, and directly or tacitly endorses it ... it is probably guilty of inducing a breach of contract, and therefore can be liable for compensation, because it effectively conspired in the unlawful action," he says.

"Generally speaking, the company doing the poaching often gets away with it, because it is relatively hard to prove what is happening, and even if you do, hard to show what your financial losses have been."

Our Company Needs You: The Rise of Employer Branding

The Rise of the Chief People Officer