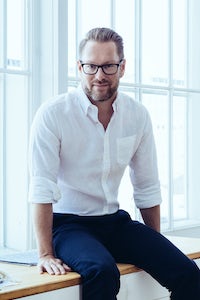 Gant appoints CEO
Gant AB has named Brian Grevy as its new chief executive. Grevy joined the company in 2016 as chief marketing officer; prior to this he served as general manager of training at Adidas. He succeeds Patrik Nilsson, who is stepping down from the position after four years.

032c names executive editor
Victoria Camblin has been appointed executive editor of 032c magazine. She succeeds Thom Bettridge, who will continue to contribute to the Berlin-based title as editor-at-large. Having worked at 032c from 2006 to 2013, Camblin returns to the magazine from Art Papers, where she was editor and artistic director.

Endeavor names CMO
Bozoma Saint John has been appointed chief marketing officer at Endeavor. She joins the company from Uber, where she held the role of chief brand officer. Before Uber, Saint John was head of global consumer marketing for iTunes and Apple Music.

Guess chairman and co-founder resigns
Paul Marciano has resigned as executive chairman of Guess after a committee completed an investigation into allegations of improper conduct. Marciano gave up his day-to-day responsibilities in February after model Kate Upton accused him of sexual harassment.