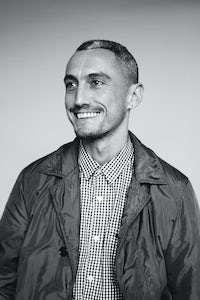 LONDON, United Kingdom — The designer Richard Nicoll passed away early this morning in Sydney, Australia. He was 39 years old. For many years, the designer, who grew up in Australia but was based in London, was a regular at London Fashion Week and was well-loved within the London fashion community.

“It is with great sadness that we confirm that Richard Nicoll passed away unexpectedly this morning in Australia from a heart attack," his family said in a statement.

"Richard was one of the quiet stars of fashion. He was a true gentleman, a wonderful friend and a much loved son. Anyone that had the privilege of knowing him knew that he had a heart of gold, an innate kindness and a modesty and humility that sometimes didn’t allow him to acknowledge his own exceptional creative talent."

"He loved his life in Australia. He had recently confirmed a new role at Adidas and a collaboration with Woolmark both of which he was excited about. We will miss his handsome face, his sense of humour and his love.”

Family and friends will make their way to Australia, and ask for their privacy to be respected at this difficult time, they added. Further information regarding a memorial and tributes will follow.

The British designer made his debut at London Fashion Week in February 2006. He was awarded three Association Nationale pour le Développement des Arts de la Mode (ANDAM) prizes in 2008 and named Best Young Designer at the Elle Style Awards in 2009. He was also twice a BFC Vogue Fashion Fund finalist.

Nicoll had built a reputation around the world as one of the leaders of a generation of exciting British designers. His designs were celebrated for their beautiful and classic modern aesthetics. He graduated from Central Saint Martins with a Masters in Womenswear in 2002, catching the eye of many in the industry. His entire MA graduate collection was purchased by Dolce & Gabanna.

In 2015, he closed his eponymous label, which produced both men’s and women’s collections, bowing out of London Fashion Week. Nicoll subsequently took up a position as creative director at the mid-range British retailer Jack Wills, which he exited earlier this year. He had most recently taken a creative director role at sportswear giant Adidas in Germany, where he was set to start in January.

Our thoughts are with his friends and family.