BoF and McKinsey & Company are pleased to share a preview of exclusive data from The State of Fashion 2021, our highly anticipated annual report on the future of the fashion industry, which reveals that the global fashion industry could lose up to 20 percent of revenues this year — worth up to a staggering $440 billion — and lays out potential scenarios for the year ahead as well as the timing of the sector’s recovery.

BoF and McKinsey & Company are pleased to share a preview of exclusive data from The State of Fashion 2021, our highly anticipated annual report on the future of the fashion industry, which reveals that the global fashion industry could lose up to 20 percent of revenues this year — worth up to a staggering $440 billion — and lays out potential scenarios for the year ahead as well as the timing of the sector’s recovery.

The Business of Fashion and McKinsey & Company have now released The State of Fashion 2021, focusing on the themes, issues and opportunities impacting the sector. Download fashion’s most authoritative report here.

In retail stores, corporate offices and throughout global supply chains, the Covid-19 crisis has devastated the global fashion industry. For many companies, the inevitable shakeout of the sector will be tough, and not everyone will survive. These are some of the conclusions from exclusive new analysis from The State of Fashion 2021 report by The Business of Fashion and McKinsey & Company.

To develop an early perspective on how the industry will fare in the next phase of the fast-changing Covid-19 crisis, McKinsey & Company’s Apparel Fashion & Luxury Group has spoken to over 100 experts and senior executives globally, crunched a comprehensive set of company reports and surveyed consumers around the world.

There remains, of course, enormous uncertainty over both the health and economic outcomes of the crisis, but by forecasting the short- to mid-term economic impact and drawing up potential scenarios for the recovery of sales to 2019 levels, this new analysis provides some early and essential guidance for the sector in advance of the our full report, which will be released at VOICES, BoF's annual gathering for big thinkers, which will be held virtually from December 1 to 3, 2020 for BoF Professional members.

The collapse of fashion industry revenues around the world this year has been unprecedented. In Europe, more than 40 percent of consumers have spent less money on clothes due to general and personal financial concerns and because they feel less need to buy clothing now they are at home far more than ever before.

Now, when consumers do spend money on fashion, their choices have become disproportionately influenced by product quality, practicality, comfort and value for money, with trendiness and style falling lower in priority, resulting in a marked shift towards basic and casual-wear items. In fact, following a deep, unavoidable initial dip at the outset of the crisis, sales in these categories are almost back to pre-crisis levels. This is in sharp contrast to formalwear and special occasion clothing, which has recovered to only 25 percent of last year’s sales, according to a recent McKinsey European consumer survey.

In total, global fashion revenues were 34 percent lower in the quarters reported in April, May and June 2020 than the same quarter in 2019, and the industry is predicted to lose between $340 and $440 billion this year. An analysis of the balance sheet structure of European listed companies in the fashion sector reveals that up to three quarters of players would likely not survive without government support schemes. Assuming that these subsidies will not continue indefinitely, analysis by McKinsey predicts that 20 to 30 percent of companies in the global fashion sector are expected to go bust or be acquired by the largest and strongest companies.

This shakeout is already happening. Since the crisis started, fashion companies in Europe and the US — including Neiman Marcus & J.Crew in the US and Debenhams in the UK — with a combined annual revenue of $50 billion have filed for bankruptcy or are restructuring using government-backed insolvency processes.

Now is the time for executives to make bold decisions to get through these stormy seas.

"With many regions across the world now facing a second wave of the pandemic, we expect industry disruption to continue in 2021, with global recovery not occurring until the latter half of 2022 at the earliest," said Dr Achim Berg, global leader of the Apparel, Fashion and Luxury Group at McKinsey. "Now is the time for executives to make bold decisions to get through these stormy seas, whether they are about channel strategy, geographic focus, assortment planning or securing supply chains."

Charting the Road to Recovery

The situation may be better now than many feared during the initial outbreak, but given the continued spread of the virus and the economic impact of government support measures, fashion companies need to continue to plan for a range of scenarios in order to make critical decisions to secure their future.

In April, McKinsey surveyed more than 2,000 executives to get their perspectives on the pace and extent of the global economic recovery. Their predictions were gloomy, expecting GDP in the third quarter of 2020 to be around 12 percent lower than the same quarter last year. The reality today is bad, but not that bad — GDP has fallen by around 5 percent, which was on the more optimistic end of the executives’ predictions.

There were also other signs over the past few months that help to provide a view into how the crisis may play out from here. As Covid-19 shut down city centres, online fashion sales surged. In just eight months, the industry registered the equivalent of six years’ growth in the penetration of online shopping. Online sales rose from 16 percent of total sales in January to 29 percent in August, with Germany, the UK and Nordic countries driving much of the growth and similar trends of accelerated digitisation observed in Asia and the US. Some companies have reported double- or even triple-digit growth in their online businesses.

In just eight months, the industry registered the equivalent of six years' growth in the penetration of online shopping.

Many retailers and manufacturers have proved how flexible and agile they can be in scaling up their online channels — qualities that will be essential over the next couple of years. Although the adoption growth curve of online shopping will eventually slow, the overall trend should broadly sustain. More than half of consumers surveyed in early September said they planned to shop less in physical stores post-lockdown, especially while Covid-19 measures make the experience less enjoyable.

But what will happen when social distancing measures are relaxed and stores are properly re-opened? In the months after lockdowns were lifted in regions around the world, sales bounced back more quickly than expected. Consumers who, having been deprived of the opportunity for so long, eagerly returned to their favourite shops in high numbers. The release of this pent-up demand has meant that there have even been weeks where, for some fashion retailers, sales have returned to 2019 levels.

This dynamic was first reported in China in early May and has later replicated in Europe and — to a lesser degree — in North America, but it is still far from clear that these early signs of recovery point to a rapid return to pre-crisis spending. The big question is what will happen now that the summer is over in the northern hemisphere.

McKinsey Fashion Scenarios analysis by the McKinsey Global Institute in conjunction with Oxford Economics suggest that global fashion sales are unlikely to return to 2019 levels before the third quarter of 2022. Any delay to a widely available vaccine could push this back to as late as the fourth quarter of 2023. But these estimates mask the fact that there will be regional and market-level winners and losers, with the crisis exacerbating pre-existing trends in the sector, as well as stark variations in performance between markets. What is more certain is that recovery everywhere will be driven largely by online sales. Offline sales are expected to recover fully only once a vaccine becomes widely available. 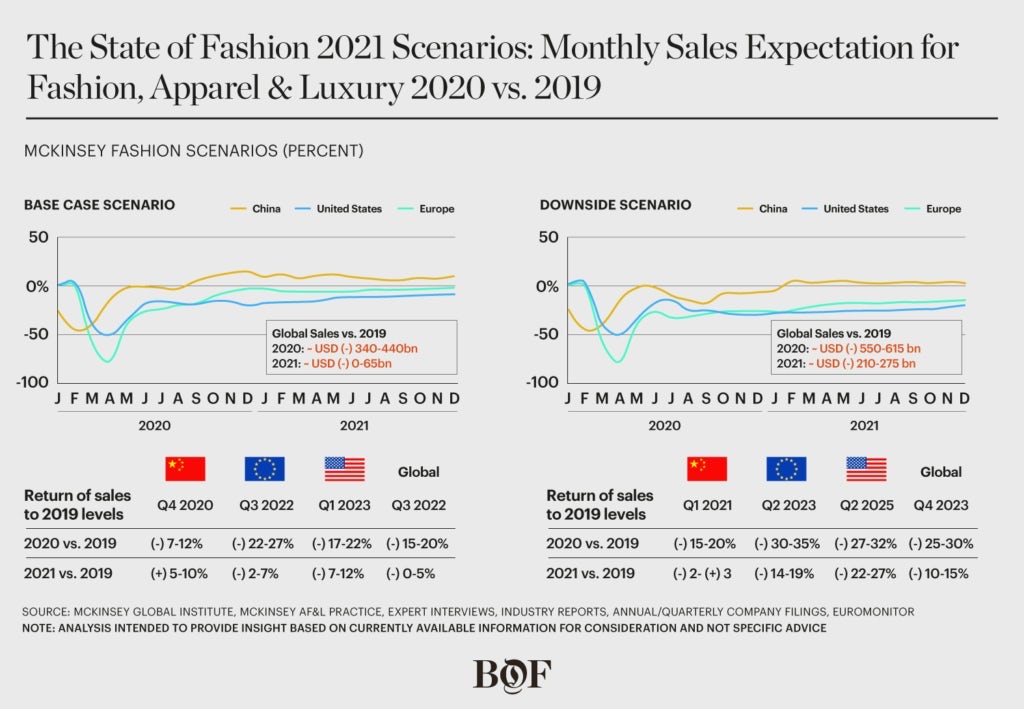 The China market is likely to recover by the end of Q4 2020, while Europe and the United States will take longer.

The China market is likely to recover by the end of Q4 2020, while Europe and the United States will take longer.

In Europe, growth is likely to be on par with the global average, returning to 2019 levels only by late 2022. There will be sales spikes from holiday-season shopping and Black Friday in 2020, during which sales could rival last year’s levels, but the overall trend is one of slow recovery. If a second round of lockdowns take hold, then the forecast is inevitably worse, with sales still down by perhaps 30 to 35 percent this year.

For the luxury sector specifically, European retail has been an important driver of growth. As Chinese tourists in particular continue stay at home, sales in the European luxury sector are predicted to fall even further, by 40 to 50 percent by the end 2020, with directionally similar drops anticipated in the US. These trends are unlikely to reverse before international travel returns to its pre-crisis levels.

The narrative is very different in China, where luxury customers are spending at home, helping to drive a faster recovery. By the end of the year, luxury sales in China could be 8 to 13 percent higher than in 2019, according to McKinsey Fashion Scenarios. Major shopping occasions such as Singles Day on November 11, 2020 and Chinese New Year on February 12, 2021 will likely see unique spikes in online sales. In particular, online marketplaces — such as Tmall and Taobao — should perform particularly well as they benefit from growing demand and increased supply, as retailers try to move their excess inventory.

In the US, the impact of the crisis on the fashion industry was initially less severe than in other regions, as lockdowns were implemented later and the nationwide distribution of stimulus cheques propped up consumer spending. However, even with a second stimulus cheque expected in the fourth quarter, the long-term recovery is likely to lag behind that of China and Europe, with a base case scenario recovery timeframe not expected until the first quarter of 2023, or as late as the second quarter of 2025 with a more conservative outlook.

This lagging US recovery can be attributed to dampened consumer sentiment extending into 2021, with total fashion sales in 2020 down 17 to 22 percent versus 2019 in a base case scenario. The holiday season is not expected to provide the same uplift in the US as in Europe, as company parties, charity events and other large gatherings are cancelled or move online, negating — or at least minimising — the need to spend money on new clothes. Full recovery to pre-crisis levels is anticipated no earlier than the first quarter of 2023 — a delayed recovery compared to Europe or China.

While there are still grounds for optimism in some fashion sub-sectors, channels and markets, demand will remain subdued well into 2021 and there will be inevitable casualties along the way. Only those companies that are flexible and responsive in their decision-making and who mirror consumer sentiment in their product offerings will be poised to seize the growth opportunities that emerge.

If you are already a member, register for VOICES here.

For senior executives who want to go deeper, a VOICES 2020 Executive Pass will give you access to a special knowledge pack, including a physical copy of The State of Fashion 2021, bespoke networking opportunities and a more immersive VOICES experience.