Imran Amed sits down with the one and only Tom Ford to understand how he built his own brand — projected to soon turn over $1 billion a year at retail — and the lessons he has learned along the way.

LONDON, United Kingdom — “It’s much, much, much harder starting from scratch,” says Tom Ford on launching his own brand. Fresh off a trans-Atlantic flight, but still looking every part the superstar designer, Ford is immaculate in one of his dark, signature, peaked-lapel suits, with a blue tie and white shirt, fastened at the neck by a gold collar pin, all offset by glowing skin and perfectly manicured stubble. “I didn’t have any idea how hard it would be, and I have had every advantage that anyone could possibly have.”

Indeed, with a significant personal fortune estimated at more than $200 million, name recognition around the world and invaluable years of experience at the creative helm of Gucci and Yves Saint Laurent, even the legendary Tom Ford has had to overcome some of the same challenges faced by every other fashion start-up — albeit with a significant leg up.

Sure, he had a well-known name and a magnetic personality to match, but the incipient business had no defined brand identity or DNA to build upon. There were no established house codes or signatures that could be re-interpreted and re-imagined each season, no core products that could drive predictable recurring revenues, and no stores to sell them in.

In order to succeed, Ford would have to create everything from scratch.

LESSONS FROM THE GUCCI YEARS

And when those products were created, they could rapidly be distributed en masse at Gucci stores around the world. “There were 180 stores, so there was immediately a distribution network. Six months later, all the things that I designed were all over the world — and boom, sales! It happened very fast,” he says, snapping his fingers for effect.

He is not exaggerating. The turnaround and subsequent growth of the Gucci business is now the stuff of fashion industry legend.

Tom Ford first arrived at Gucci in 1990 as a women’s ready-to-wear designer. But things were not going well with the business. In 1993, Gucci lost $22 million on $230 million in sales. Maurizio Gucci, the founder’s grandson, had over licensed the brand into everything from ashtrays to coffee mugs. Creditors and employees were chasing the company for payments. The truth is, Gucci was on the verge of bankruptcy.

Then in 1994, Ford was appointed the brand’s creative director by rising new chief executive Domenico de Sole, who had the support of Gucci’s new majority owners, Investcorp, a Bahrain-based investment group. Left to his own devices, Ford injected the brand with a heady dose of sexy, cool glamour that took the international fashion industry by storm with his ground-breaking Autumn/Winter 1995 collection, changing the fortunes of the Gucci brand seemingly overnight.

By 1999, Gucci was valued at more than $4 billion and had attracted the interest of some of the luxury industry’s biggest business titans, including Bernard Arnault of LVMH, Patrizio Bertelli of Prada and François Pinault of Pinault Printemps Redoute. Eventually Mr Pinault, who rode in at the last minute as a proverbial white knight, won the battle for the star brand and its star designer.

Soon after, Ford and De Sole went on a buying spree, building what eventually became the “Gucci Group,” starting with the acquisition of Yves Saint Laurent, where Ford took the role of creative director, in addition to his existing role at Gucci. Deals to acquire Boucheron (2000), Sergio Rossi (2000), Balenciaga (2001), and Bottega Veneta (2001) soon followed, as well as investments in budding businesses helmed by Alexander McQueen (2000) and Stella McCartney (2001).

If there was a superman in fashion, it was Tom Ford.

But it was not to last. After an acrimonious and public parting of ways from Mr Pinault in April 2004 following disagreements over control of the business, Tom Ford — the man who built the foundations of the Gucci Group fashion empire (today, known as Kering, and run by Mr Pinault’s son, François-Henri Pinault) — suddenly found himself without a job.

“I was unsure of what I’d do after [that] because, quite honestly, I was shell-shocked. I was very depressed about it,” says Ford. At the time, he told the press that he had no interest in returning to fashion and that he might turn his creativity to other activities.

But that was then, this is now. Today, almost ten years later, Mr Ford and I are sitting in his intimate, lair-like office at the global headquarters of Tom Ford International (TFI) in London’s Howick Place, where the designer’s touch is apparent everywhere you look.

His office is dark, but perfectly lit, like a bar at a grand, five-star hotel. The furniture is made of deep, rare Makassar ebony from Indonesia. Elevated in the corner, under a spotlight, is a shocking “mutated mannequin” sculpture by the artists Jake and Dinos Chapman. There are dozens and dozens of identical black felt pens, neatly organised into cups on his desk, and leaning on top of a chest of drawers are several striking black-and-white images in identical elegant black frames, nods to some of the defining moments and people in Ford’s personal and professional life.

Front-and-centre is a photo of a then 30 year-old Richard Buckley, Ford’s partner of more than 25 years. There is also a sultry headshot of the stylist-cum-editor Carine Roitfeld who worked closely with Ford during his years at Gucci, a Vanity Fair portrait of Ford with Domenico de Sole (now the Chairman of TFI), and a full-frontal nude image of martial arts champion Samuel de Cubber from a controversial Ford-era Yves Saint Laurent cologne ad.

An hour earlier, Ford had stepped off a plane from Los Angeles, where he spends about half the year. Jack, his 10-month-old son, is back at the ranch in Santa Fe, New Mexico, with Buckley. Ford is in London for only three days to do fittings for his Spring/ Summer 2014 womenswear collection and to preview the first stand-alone Tom Ford store in London which opened quietly on Sloane Street in July, followed by a splashy London Fashion Week party.

Yes, Mr Tom Ford is back in fashion, and in a big way.

“By early 2014, if we continue to meet our business plan, we will hit one billion dollars [a year] at retail of Tom Ford products,” he reveals. “That’s all the products together: eyewear, fragrance, cosmetics, ready-to-wear, men’s and women’s accessories. A billion dollars of product with the label Tom Ford on it will be selling at retail.”

It’s a staggering number and a milestone that takes most new fashion brands decades to achieve. But Mr Ford has done it in less than ten years.

How did he do it?

THE POWER OF A BOOK

“I was very aware that I needed to promote my name, and so I was conscious of that from the very beginning,” he begins. “I realised after I left Gucci, that I needed to own what I had done, so the first thing I did was a Tom Ford book. I did it within 4 to 5 months of leaving,” he explains. “I thought, ‘I’m very proud of what I’ve done and I’m going to claim it, and I’m going to put it all in a big thick book and label it Tom Ford.’” 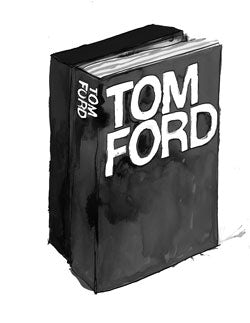 The book, published in 2004 by Rizzoli, with its bold monochromatic Tom Ford branding — “in 214-point type,” according to Vanity Fair’s Graydon Carter — is now in its fifth print run.

It also set the branding template for the slew of Tom Ford products that would come in its wake, and provided opportunities for Ford to connect with his global fan-base and the luxury industry more broadly, keeping his name in the increasingly crowded mix of fashion brands vying for attention.

Then in April 2005, Ford announced two global licensing deals: with Marcolin for eyewear and Estée Lauder for beauty. Whereas most luxury fashion businesses start off with very expensive in-house ready-to-wear collections, which require significant upfront investment, the Tom Ford brand would launch with products at more accessible price points, run by trusted partners and requiring little to no cash investment from Mr Ford himself, only his time, taste and sensibility.

At the time, it was seen as a highly unusual, contrarian move. But in hindsight, it was a masterstroke. Deals like these come with multi-million dollar budgetary commitments by the licensee to advertise the product lines. These global campaigns, which Ford directed and oversaw himself, would give further visibility to the Tom Ford brand and help to reach a vast consumer base from day one.

“I realised that [the licensing deals] would keep my name very public, [so] that if I chose to go back into fashion it would even make my name bigger,” he adds.

But Ford cautions that none of this would have been possible without his strong track record at Gucci. “Name recognition is only as good as what you produce, just as a logo is as only as valuable as what it’s on. So had I produced collections, which had not been well received, it would have been meaningless.”

It was also Ford’s experience at Gucci that helped him to think big and develop an overall vision for Tom Ford, the global luxury brand. 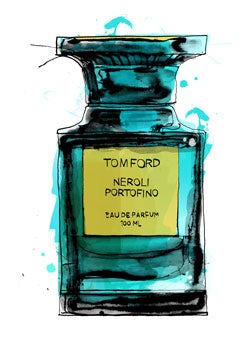 “I didn’t have a fear of scale,” he says. “I’m used to designing a world because even as I was thinking of the perfume bottles, I was [already] thinking about how would they look in our packaging, how would they look sitting in our case lines, how they would look next to each other. So everything has a cohesive look which is what gives a brand a personality.”

Another important branding component was the use of discreet signifiers which would signal the label to people in the know, without being too overt. The first example was in eyewear: a horizontal ‘T’ that runs from either side of the front of the frames and extends down the arms.

“When working with our partner who manufactures and distributes the glasses I said ‘This is our logo,’ and they said ‘Well we need something that says Tom Ford on the side’, and I said ‘No.’ Like you can spot a pair of Persols, that is now our signifier and it’s on virtually every pair of glasses we make. It’s very, very hard to find those initial identifiers when you are starting your own company.”

Last year, more than 1 million pairs of Tom Ford frames were sold globally, says Mr Ford. That’s the equivalent of a platinum record in the United States, albeit at an average price tag of about $350, resulting in an eyewear business that alone sells around $350 million at retail.

As for Tom Ford Beauty, by the end of the fiscal year ended June 2014, the business is expected to turn over more than $275 million at retail in more than 40 countries around the world, according to market reports.

“I don’t think [this] is anywhere near where we are going to be,” says Ford, when asked to comment on the further potential of the beauty business. “I would like to see us easily at $500 million, but it depends how far in the future we are projecting. I would like to be one of the five major brands in the world, in terms of scale.”

Read Part 2 of our exclusive interview with Tom Ford here.