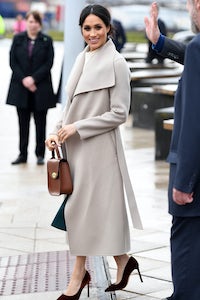 LONDON, United Kingdom — When Meghan Markle and Prince Harry made their first public appearance as a couple at the Invictus Games in Toronto last September, it was as if Mackage co-founders Eran Elfassy and Elisa Dahan had won the lottery. Markle wore one of the brand's classic "Baya" leather jackets in a berry hue, the first of three appearances in Mackage apparel.

While the Canadian brand has other celebrity fans, including Gigi Hadid and Madonna, Elfassy and Dahan say the boost to sales and site traffic when Markle was seen wearing their clothes was beyond compare. According to Dahan, the most recent outing gained them 1.6 billion media impressions in 24 hours, exposure worth $20 million in equivalent advertising spend.

"We've never seen an impact like this," said Dahan. "Royals have a different kind of impact than anybody else that's ever worn our products."

A former actress, best known for her role as Rachel Zane in courtroom drama "Suits," Markle frequently covered fashion and beauty via her lifestyle blog The Tig, which she shuttered last April. But almost overnight, Markle has become one of the most powerful fashion influencers in the world.

Royals have a different kind of impact than anybody else that's ever worn our products.

Unofficial endorsements from the royal family are worth £200 million a year to British companies alone, according to a 2017 report by Brand Finance. But the business of dressing a royal brings its own challenges.

The usual tactics for building a relationship with a celebrity — including paid trips and free merchandise — run afoul of royal protocol. The payoffs are also different; while TV stars are often happy to show off their sponsor's merchandise on Instagram, royals typically adopt a lower profile on social media and don't actively endorse products.

Mackage's ties to Markle predate her relationship with Harry. Back in 2015, the brand invited Markle to its spring fashion show and dressed her for the occasion. The company hasn't dealt with her directly since then and hasn't known in advance when Markle will wear their clothes, said Dahan.

Certainly, brands that Markle informally endorses benefit from international exposure. While well established in Canada as a go-to for a down coat, Mackage brand awareness outside the Americas was relatively low. "A lot of people associate us with making down jackets, but [Meghan Markle has] shown the world we do other things than just that," said Dahan. "It's solidifying our brand awareness with our wholesale customers, and also making the consumer more aware about everything that we do."

But brands that don't have a pre-existing relationship with Markle will need to get creative. The usual formula of offering gifts and perks is out.

When working with Catherine, the Duchess of Cambridge, brands will send collection lookbooks to Kensington Palace, said Claudia Joseph, journalist, royal expert and biographer of the Duchess of Cambridge. Her private secretary will then call in looks for her to try on. "There is often a pile of bags at the policeman's box on the gates of Kensington Palace for her perusal," Joseph continued. "The Duchess usually takes pieces 'on approval.' … No reason is given for their return."

"Anything to do with sponsorship absolutely has to be avoided," said Richard Fitzwilliams, royal commentator and a public relations consultant. This includes any kind of product placement — paid or otherwise. "It links the royal family to a money-making concern."

"The same rules apply to Meghan as they do to Kate," added Joseph. "I'm sure she is already aware that it would not be appropriate for her to use her position to promote particular brands."

Kensington Palace did not respond to a request for comment.

Brands are also steering clear of the marketing blasts that would typicallly accompany a celebrity wearing their products.

Markle has worn jewellery from Birks on multiple occasions in recent months. She was first introduced to the jeweller when she was living in Canada by her friend and reported stylist Jessica Mulroney, who herself had a close relationship with the brand.

We were very careful not to overly promote anything that she'd be wearing.

"This is the kind of natural PR that every brand dreams of," said Eva Hartling, vice president, brand and chief marketing officer, who added that she started seeing Birks linked to Markle in the media at the Invictus Games. "She was wearing several Birks pieces that day, so that's when the whole rollercoaster began. But she was already a client for several years before that."

However, she continued: "We were very careful not to overly promote anything that she'd be wearing," noting how when Markle steps out wearing Birks pieces, the company will not make the first statement. "We're very mindful of preserving that relationship because she'll be an official member of the royal family, we just want to be very sensitive to that situation and preserve the natural friendship that exists."

The co-founders of Strathberry, a Scottish bag brand that Markle has worn twice since her engagement, echo this sentiment. Guy and Leeanne Hundleby had collaborated with a number of influencers before, including Mr Bags and InTheFrow's Victoria Magrath, but were more cautious around the press when it came to discussing Markle.

"[When it came to press interviews] we were very careful about who we worked with and what we said, partly with respect who's been carrying the bags, it doesn't really feel our position to be shouting about it," Guy Hundleby said. "We were also careful it didn't become something that would then define the brand."

Editor's Note: This article was revised on 21 May, 2018. A previous version of this article misstated that Rebecca Deacon is the Duchess of Cambridge’s stylist. This is incorrect. She is her former private secretary.

Styling Politicians in the Age of Image Wars