GENEVA, Switzerland — These are painful times for Swiss watches. According to the Federation of the Swiss Watch Industry, year-on-year exports were down 16.1 percent in March, worrying figures that continue a downward trend. But while the market for new watches takes a hit, the vintage watch market is booming.

After a series of record sales in 2015, expectations are high for this year’s vintage watch auctions. On Saturday, Sotheby’s and Phillips hold auctions in Geneva, while Christie’s first big sale takes place in the Swiss city on Monday.

Recent results suggest it will. Last May, Phillips sold a Patek Philippe stainless steel monopusher chronograph for just under $5m against a low estimate of $1m, making it the most expensive stainless steel watch ever sold. At the same sale, a Rolex Daytona once owned by Eric Clapton sold for $1.4m, a Rolex record.

Then in November, Sotheby’s sold the Patek Philippe Henry Graves Supercomplication, the most complicated pocket watch ever made without computer assisted design, for $24 million, the most ever paid for a watch at auction and $13 million more than it sold for in 1999. There’s big money in vintage watches right now.

The rise in the number of collectors on Instagram seeing the beauty of vintage watches has played a big part. So has the blogosphere and the evolution of Hodinkeeand others.

It’s difficult to pinpoint exactly when the vintage watch industry was born (some say the 1960s, others that it wasn’t until the late 1970s), but today analysts believe it’s worth in the region of $2 billion, with $300-350 million of that taken by the big five – Christie’s, Sotheby’s, Phillips, Bonhams and Antiquorum. Last year, Christie’s and Sotheby’s sold $90 million and $79.8 million worth of vintage pieces respectively, while Phillips’ new watch division racked up sales of $80 million, led by one-time Christie’s employee and his generation’s lodestar watch auctioneer, Aurel Bacs.

“We’re seeing unprecedented interest across the board in vintage watches,” says Eric Wind, vice president, senior specialist of watches for Christie’s. “Everything from vintage Rolex to emerging brands at a level under $10,000 has gained incredible amounts of new followers and collectors in the last year.”

“The vintage watch market is in a very healthy state at the moment,” agrees Paul Maudsley, Phillip’s international specialist, director of London Watches Department. “Each year new collectors come on board and gain an understanding of the various specialist collected brands, and prices rise steadily.” 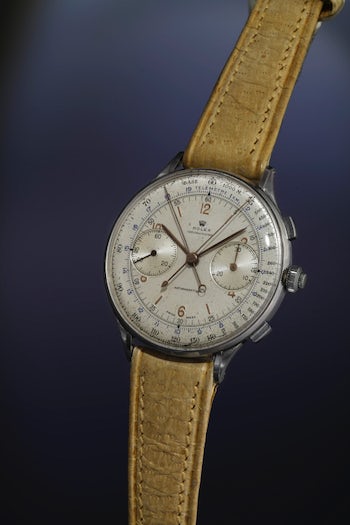 Patek Philippe and Rolex remain kings among those brands collectors shell out for, but interest is growing in other old-school makers Vacheron Constantin, Audemars Piguet and Breguet. Some defunct dial names like Universal Genève and Enicar are performing well, too. “A Universal Compax would have been £1,500 five years ago,” says Maudsley. “Now it could well be £5,000.”

Experts believe that the surge is due to the power of the Internet, and particularly the genesis of watch blogs and social media. “The rise in the number of collectors on Instagram seeing the beauty of vintage watches has played a big part,” says Wind. “So has the blogosphere and the evolution of Hodinkee [an online magazine devoted to watches] and others. Auction houses bring some incredible watches to market, they appear on blogs and Instagram and then people realise a [vintage] watch has a story, unlike a new watch. And that plays on the drive for individuality.”

Benjamin Clymer founded Hodinkee in 2008. “Prior to just a few years ago, vintage watch collectors were often islands, unless they lived in major cities,” he says. “The watch magazines didn’t cover vintage at all because there was no advertising in it, so vintage was relegated to only the most die-hard of collectors. The web changed all that, and now there’s a regular stream of communication and trusted knowledge resources available to everyone about old watches.”

If information is key, so too is the choice vintage offers. Every year, brands pump the market full of new watches, obliging retailers to discontinue older models. This cycle has flooded the pre-owned market, and by extension the vintage market, too. “Most people think that watch sales start with price, but that’s not the case,” says Lloyd Amsdon, one of the founders of WatchFinder & Co, which sells pre-owned and vintage watches online and through a small network of UK retail outlets. “The biggest single factor is choice. Retailers don’t sell Rolexes made over the last 50 years, they sell the new ones. Vintage and pre-owned open up the market and give consumers more choice.”

The provenance of a watch is critical, too. Schnipper recounts that a few years ago she had been in touch with Henry Graves’ family about the 1920s tycoon’s watch and “found a cornucopia of information” about it. “We were able to extrapolate what was already known, which made it that much more intriguing. That definitely contributed to a world-record price.”

It’s not just the story that counts, though. “Condition and rarity trump everything today,” says Clymer. “I’ve seen a special Universal steel chronograph sell for 10 times what a platinum Patek sells for because one is rare and one is not.”

Increased trust in the Internet as a trustworthy sales platform for luxury products has played its part. Sotheby’s reported online sales across the board of more than $100m in 2015, an 18 percent rise over the previous year. It also trialled a number of online-only auctions, at which 72 percent of registered bidders were new customers.

Hodinkee’s success (it now has over a million unique visitors a month) prompted it to launch an online watch store earlier this year, selling vintage watches. “The average watch we list sells within six hours of listing,” says Clymer.

The Internet is also helping to recruit female customers. Wind estimates that 95 percent of his customers are male. “We all agree that we’re seeing a small but growing interest in vintage watches among women,” he says. “And there are far more women bidding online than in live auctions.”

Growth in the vintage market appears to be global. “A lot of our new customers are from the Middle East,” says Schnipper. “We had a strong sale in London in March, and there’s pick up from the Chinese, too. We just had a Hong Kong sale, and we saw an upturn in Chinese customers. There’s a feeling there that people want to come back to the market — it’s hard to keep them from collecting.”

Wind reports a different experience. “Most of our customers are in New York, Hong Kong and Geneva, but right now we’re seeing weakness in Asia. But overall, the vintage watch market is going up while the modern watch market is going down,” he says. The average lot value at Christie’s New York auctions has gone up “significantly,” according to Wind. At the house’s December auction, it was $43,000. “It’s not a perfect metric as there a number of factors that contribute to higher values, but it’s certainly a sign of a healthy market,” he says.

Despite the historic rises in vintage watch values, few in the industry would recommend watches as investment vehicles. ‘It’s not always the case that a watch goes up in value,’ says Schnipper. ‘In general, people buy watches because they’re passionate about them.’

Maudsley agrees. “Whether its modern or vintage watches, they should be looked upon for their aesthetics, technical function and so on, not purely as investments — we have the stock market for that,” he says. “But that said, if a watch purchase is driven by a passion for the pieces, an understanding of the quality and rarity, and the buyer has done their research, then they have proven to have risen in price.”

There’s an argument too that movement in the vintage watch market is little more than a parallel to the spike in auction sales of cars, wine, art and other collectibles as investors diversify their assets in an uncertain financial climate. “All have seen a large increase in terms of returns,” says Andrew Hildreth of the watch collector’s forum PuristsPro.com. “There’s a store of value in a vintage watch, where the path of the price is to some extent known. You don’t get that when you buy a new watch.”

What the various players also agree on is that there is still vast untapped potential in the vintage watch market. “Vintage watch collecting has existed since the 1960s,” says Wind. “So there’s some maturity to it. But if you compare it to vintage cars, it’s a more nascent market.”

Retailers agree. Brian Duffy, chief executive of Aurum Group, parent company of UK retailers Watches of Switzerland, Mappin & Webb and Goldsmiths, reports that sales of pre-owned and vintage watches across the business’ estate have doubled in four years to £10m. “We think pre-owned and vintage will grow faster than the balance of the business,” he says. “It’s underdeveloped at the moment, and there’s great value and interest for the consumer.”

Clymer goes further. “We are still in the infancy of understanding vintage watches,” he says. “We see thousands of new people interested in vintage watches every year, and explosive growth in values, and this is just over the last five years or so. And most brands pay almost no attention to vintage. Wait until the big brands wake up and start to provide access and understanding to the market at large. We have a long, long way to go.”