Arnaut is the second man in a week to have been appointed to the helm of an edition of Vogue. 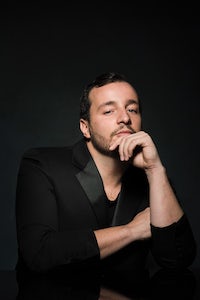 Arnaut is the second man in a week to have been appointed to the helm of an edition of Vogue.

DUBAI, United Arab Emirates — Manuel Arnaut has been appointed editor-in-chief of Vogue Arabia, succeeding Deena Aljuhani Abdulaziz who revealed on Thursday that she was fired after just two issues.

Arnaut, who will begin his role on May 7, was previously the editor-in-chief of Architectural Digest Middle East. He is the second man in a week to have been appointed to the helm of an edition of Vogue, following news that Edward Enninful will be the new editor-in-chief of British Vogue. Portugese-born Arnaut was previously editor of GQ Portugal and spent seven years as a writer for Vogue Portugal. He has also contributed to Vogue and GQ's Brazilian editions.

“After starting my professional life at Vogue, and having grown up devouring each page of its international editions, I'm deeply honoured to have the opportunity to come ‘home,’ at the helm of Vogue Arabia," said Arnaut in a statement.

"With the rich heritage of the Middle East as a starting point — and its eyes on the future — Vogue Arabia celebrates the region’s fashion and cultural identity, presenting it to the world in a luxurious, upbeat, and contemporary style. In an exciting climate of modernity and creativity, the team and I are committed to working towards a Vogue Arabia that is the proud voice of the region, representing the strength and allure of the Arab woman."

“Manuel Arnaut brings over a decade of Condé Nast editorial experience combined with a strong track record of regional success. We look forward to him building on Vogue Arabia’s foundation," added Shashi Menon, CEO and publisher, Nervora and Vogue Arabia.

News of Aljuhani Abdulaziz's abrupt departure from Vogue Arabia emerged on Thursday. In an exclusive statement shared with BoF, the Saudi princess said: "I refused to compromise when I felt the publisher’s approach conflicted with the values which underpin our readers and the role of the editor-in-chief in meeting those values in a truly authentic way."

It continued: "I am proud of what I have been able to accomplish in such a short space of time... It had initially been my intention to build this important and groundbreaking edition of Vogue from inception to a mature magazine in line with others in the Vogue stable."

The press release added that "Abdulaziz... successfully fulfilled her commitment to create a platform from which to challenge perceptions of Arab women and present alternative narratives coming out of the Middle East, while exposing diverse audiences to the region’s rich past and contemporary design scene. All at Vogue Arabia wish to thank Deena for the visionary launch and for preparing the groundwork for the future of the brand."

Aljuhani Abdulaziz was appointed editor-in-chief of Vogue Arabia in July 2016, charged with leading the launch of Condé Nast International’s long-awaited move into the Middle Eastern market.

Vogue Arabia was launched in partnership with Dubai-based publishing company Nervora, and debuted with a dual-language website in Arabic and English last year, followed by a print edition in March, starring a veiled Gigi Hadid shot by Inez and Vinoodh on its inaugural cover. The April cover featured Imaan Hammam, a Dutch model of Egyptian and Moroccan descent.

The Family Firms Ruling Fashion in the Gulf States