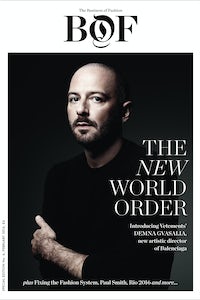 LONDON, United Kingdom — Over the last decade, our world has been radically transformed — by technology, by globalisation, by climate change. But, look closely at the underlying operating model which the fashion industry now employs, and it’s surprising just how little has changed — and how many new problems we have created.

We still travel around the world attending men’s, women’s and haute couture collections for months on end. We embrace social media and the internet, but the timing of this communication is out of sync with the availability of collections, which arrive many months after the consumer has seen them. We try to respond to the customer’s need for newness, but in doing so, we have created an over-proliferation of products that don’t have enough time to sell before the next collection drops, leading to waste. In doing so, we are constraining the creativity of our designers, exhausting the buyers and press, and overwhelming the consumer.

But there is no use in complaining. It’s time to focus on some solutions. For the last several months, the BoF team has been working on a special industry briefing on fixing the fashion system. We spoke at length to insiders from across the industry to unearth new ways in which the industry might work. As it happens, just as our issue is released today (click here to purchase your copy now), this topic is front of mind for fashion insiders around the world following big announcements from Burberry and Tom Ford on Friday.

"There’s just something that innately feels wrong when we’re talking about creating a moment in fashion: you do the show in September and it feels really right for that moment, but then you have to wait for five or six months until it’s in the store. Was it that moment, or was it the moment at the show that felt really right?" said Christopher Bailey, last week, in an exclusive in-depth conversation announcing Burberry's plans to shift to combined men's and women's shows beginning in September 2016.

"In a world that has become increasingly immediate, the current way of showing a collection four months before it is available to customers, is an antiquated idea and one that no longer makes sense. We have been living with a fashion calendar and system that is from another era," said Tom Ford, announcing his own plans. "Our customers today want a collection that is immediately available. Fashion shows and the traditional fashion calendar, as we know them, no longer work in the way that they once did. Showing the collection as it arrives in stores will remedy this, and allow the excitement that is created by a show or event to drive sales and satisfy our customers’ increasing desire to have their clothes as they are ready to wear them."

Unlike the cataclysmic industry changes brought about by Pierre Bergé with the introduction of prêt-à-porter 50 years ago at Yves Saint Laurent there will be no single solution to the industry’s woes, and no standard operating model which will work for businesses across the spectrum

But for smaller brands and businesses using a wholesale model, this kind of approach may be hard to execute. For our special briefing, we also explored other operating models as well. “We live in the era of information in the 21st century — the century of Instagram and Snapchat. People see something and there are no borders anymore — they want it,” says Guram Gvasalia, chief executive of Vetements, who has masterminded the rise of the young Parisian label helmed by his elder brother Demna, from behind-the-scenes.

“There were so many rules that were created by Pierre Bergé fifty years ago, and everyone still follows them. If we look historically at the prêt-à-porter model, designers would get an inspiration, make a collection, produce a collection and deliver the collection to stores. Others would look at what they did and try to copy it, but it would take a year to a year and a half for the copies to get there. Today it’s a very different time because at your show you already have people taking pictures that go straight to the factories. Zara is delivering the same things to their stores in three weeks,” he says, summarising another problem with the current system, in the wake of the Internet.

So the Gvasalia brothers are proposing another solution: by introducing a new operating model which consolidates menswear and womenswear into just two main collections per year, shown at the time of the pre-collections in January and June, they believe they will improve both their creative output and business results of their young brand.

Indeed, unlike the cataclysmic industry changes brought about by Bergé with the introduction of prêt-à-porter 50 years ago at Yves Saint Laurent, or the upending of the entire fashion week schedule singlehandedly sparked by Helmut Lang, who moved his show to New York in 1997, before the London collections — a position which New York still holds today — there will be no single solution to the industry’s woes, and no standard operating model which will work for businesses across the spectrum of luxury, contemporary and fast fashion. Rather, each business will have to define its own future and find its own path for adapting to the radically changing market landscape.

“It’s a problem everyone is aware of; a problem I have heard people speaking about for a few seasons,” says Demna, the elder Gvasalia. “Look at Azzedine Alaia, showing the collection when he wants to show it and not showing when everybody is else is showing. That’s their model and it works for them,” he says referring to Alaia’s intimate presentations, usually held after fashion week, for only a few of the industry’s top buyers and press.

Another upstart, Esteban Cortazar, who has been experimenting with a new model that was initially incubated by Net-a-Porter, has his own ideas on how things should work. By showing his collections privately to buyers several months in advance, and focusing his fashion shows on reaching the end consumer, he is able to deliver products to stores a few weeks after fashion week, capitalising on the buzz and attention it creates.

Meanwhile, industry veteran and British fashion legend Sir Paul Smith, will introduce his own new operating model this season after 40 years in business. Smith believes the fashion industry has “gone mad” with a “horrendous disease of greed and over-expansion and unnecessary, massive over-supply of product.” In response, Smith is collapsing a business which once had 27 different collections and lines into just two collections, incorporating both menswear and womenswear, with four deliveries annually for each. He is also scaling back the wholesale model upon which his business was built.

Each of these case studies comes with its own benefits and risks. But first, we start with a look at the fashion system today in a wide-ranging roundtable discussion chaired by BoF’s editor-at-large Tim Blanks, who explores the various challenges our industry faces with a group of respected insiders. By picking apart each issue in depth and then brainstorming the principles that the industry needs to keep in mind when thinking about solutions, we hope to spark a global discussion in the fashion industry about the future we can create together.