Harris Wharf, a family-run, Turin-produced brand with London sensibilities, is steadily expanding its footprint with a business based on sharp cuts and a remarkable price-to-quality ratio.

LONDON, United Kingdom — Browse the racks at Barneys New York or London’s Dover Street Market and you may stumble upon a selection of modish, sophisticated and exceptionally cut blazers and coats by a 5-year-old, family-run, Turin-based brand called Harris Wharf London.

The company’s collections, infused with London sensibilities, are cast in a range of subdued, classic colours and manufactured from breathable felted wools that hold their line extremely well. “Simple cuts and re-interpretation of a classic design is the core of the brand,” 25-year-old co-founder Aldo Acchiardi told BoF. 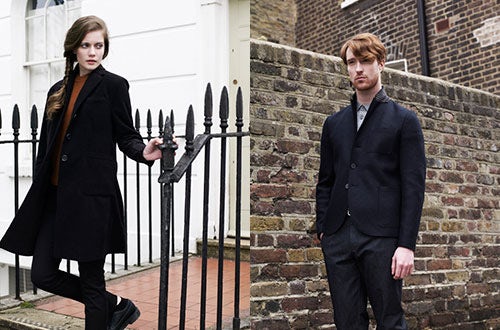 But perhaps the most compelling thing about Harris Wharf’s elegant offering is its remarkable price-to-quality ratio. The brand’s durable and expertly produced jackets and coats range from about £220 to £600 (about $360 to $980 at current exchange rates).

The scion of a Turin textiles family that has been in the business for four generations, Aldo manages the brand’s production and distribution, while his 27-year-old sister, Giulia, designs the collections.

Sourcing production was “easy for us,” admitted Aldo. “My great grandfather had a glove-making factory in Turin, which my grandfather changed more into production. My father moved it into developing particular fabrics like fleece, which we call Polair. It is not huge, but when it goes, it goes.” The factory is equipped with 20 sewing machines and employs 30 people.

Many of the employees were trained at Gruppo Finanziario Tessile, an ill-fated Turin factory of industrial proportions that created garments for Valentino, Armani and Ungaro in the 1970s. “They are in their 50s now and it is incredible to have such a valuable pool of people, which stems from the unique situation of having had such a big factory [in the area that did luxury-level garments] so well. We have the know-how.”

Indeed, easy access to skilled workers (and “a production manager who is bloody tight”) is one key part of the secret to Harris Wharf’s striking price-to-quality ratio. The unlined and unfussy nature of the garments also helps. But the other key factor is fabric selection.

“All of our materials are sourced in Italy. We try to be super-focused on the fabric — not too many [types] — otherwise the price goes up. So we buy in bulk and use this fabric in many different ways. Our women’s collections sometimes borrows from men’s fabrics — and the opposite.”

As their products become more popular, the company's family-owned production does raise questions about the brand’s ability to scale. But so far, Harris Wharf has managed to meet demand by the addition of satellite production facilities. In fact, the entirety of the men’s collection is now made in England, while the women’s line continues to be made at the family’s factory in Turin.

“We [have increased production] regularly; more tailors here in England, increasing a little bit the Italian workforce, or finding other tailors in Italy that help the factory to produce. [Growth] takes time, it needs to be organic. It doesn’t need to be too sharp or too strong, otherwise you risk overstressing the structure.”

“We manage to supply most of the customers that we work with, but if a customer rings up and says, ‘Ah I forgot to place an order' – this is scheduled production and you can’t do it.”

Harris Wharf operates a single direct-to-consumer store in Camden Passage, a narrow pedestrian street in London’s affluent Islington neighbourhood, which the founders were able to open right when they launched the business. Coming out of internships at Alexander McQueen (Guilia) and Vivienne Westwood (Aldo), the Acchiardi siblings, then aged 24 and 22, stumbled across the site by chance. “To start it we needed £100,000 [provided by their grandmother] to set up everything and have some cash in order to not go under immediately,” explained Aldo. But right from the outset, the advantages were clear.

Of course, selling directly to consumers meant healthier margins. But being close to their customer was also a tremendous advantage. “The first collection was very classic, but having the shop here, for us, made it super easy to understand [directly from consumers] which were the key concepts and products to focus on. Having your own shop allows you to correct your aim much quicker.”

“We call the shop a ‘workshop’ because, literally, at the end of each production run we have some spare fabric leftover, so what do you do? You find a nice design that has potential, but that you don’t have time to explain in the collection. And, then, you fit it with different fabrics, test it in the shop and see the results.”

The store has also helped the brand attract wholesale customers. “Having your own shop is perfect when you have to handle other buyers, because you are one of them in a little way. You are a bit different, but you know what it is like having your own shop — you can get into the mentality a little bit.”

Indeed, one of Harris Wharf’s greatest successes is undoubtedly the speed and skill with which it has built their distribution network. “We have managed to create a distribution network that is strong and suitable for us. We don’t have, anymore, the problem of selling enough. We go to the tradeshows to sell to the representative stores that I know make up the frame. The problem is knowing when to stop.”

The privately-owned brand, which declined to reveal sales figures, is already available at over 200 retailers worldwide, including Saks Fifth Avenue, Yoox and the aforementioned Barneys New York and Dover Street Market.

Acchiardi believes Harris Wharf’s early traction stemmed from its uniqueness. “At the time, there wasn’t anything like us — a jersey or a knit blazer. Now there are tonnes of people doing it. But three or four years ago, there were very few people doing it.”

The recession also helped. “Not only was there a market hole [for the product], there was a shift in consumption behaviour. It was an economic bubble before. Everyone was spending way too much on certain types of clothing. Certain brands, which were hyped before the credit crunch aren’t anymore. And, if they are, they are perceived to be very expensive. These days, you want something more in line with the times in which we are living. Luckily, we picked the right moment to introduce this product.”

As for the future, “obviously I have to check for new opportunities,” said Aldo. “In Korea, we are doing very well with the existing partners we have had for three or four years, but I keep an eye on that. Of course, I would be very interested in developing a nice relationship with some strong retailers in China, but you have to see how it goes. If you chase them, it’s not going to work. You have to let them come to you. And you have to be modest and capable of handling it. That’s the tricky bit.”