“It wasn’t trendy for girls to wear streetwear, cut their hair short and go makeup-free back then,” says the Shanghai native, now in her thirties. “These days, I don’t get strange looks because celebrities are doing it too.”

In recent years, the rise of China’s young, delicate-featured male idols (known colloquially as “little fresh meat” in Mandarin) has sparked a debate on masculinity — one that in some forums is being hailed a crisis of traditional gender roles. The fact that brands like Givenchy Beauty, Estée Lauder and Guerlain have tapped young androgynous idols Jackson Yee, Wang Kai and Yang Yang to reach female beauty consumers is a prevalent albeit well-documented phenomenon.

But fashion industry players have been slower to clock the counterpart to "little fresh meat": female idols flouting the country’s rigid beauty standards. Some are decidedly androgynous while others are self-styled tomboys.

But however they self-identify or present in public, idols can find themselves in a precarious position when it comes to local authorities, online censors and a conservative general public. How then can brands collaborate with these increasingly popular influencers and celebrities without finding themselves in hot water?

Singer and actress Li Yuchun sported a white feathered ensemble from Balmain haute couture on this year’s Cannes Film Festival red carpet, and a baroque-inspired embellished Gucci gown the following day. With her pixie cut and boyish features, Li — who also goes by the name Chris Lee — stands out from legions of doll-like celebrities who have long dominated China’s media landscape, with impressive brand accolades to match: campaigns for Givenchy and L’Oréal, and a page in Karl Lagerfeld's “Little Black Jacket” book photographed by the man himself. 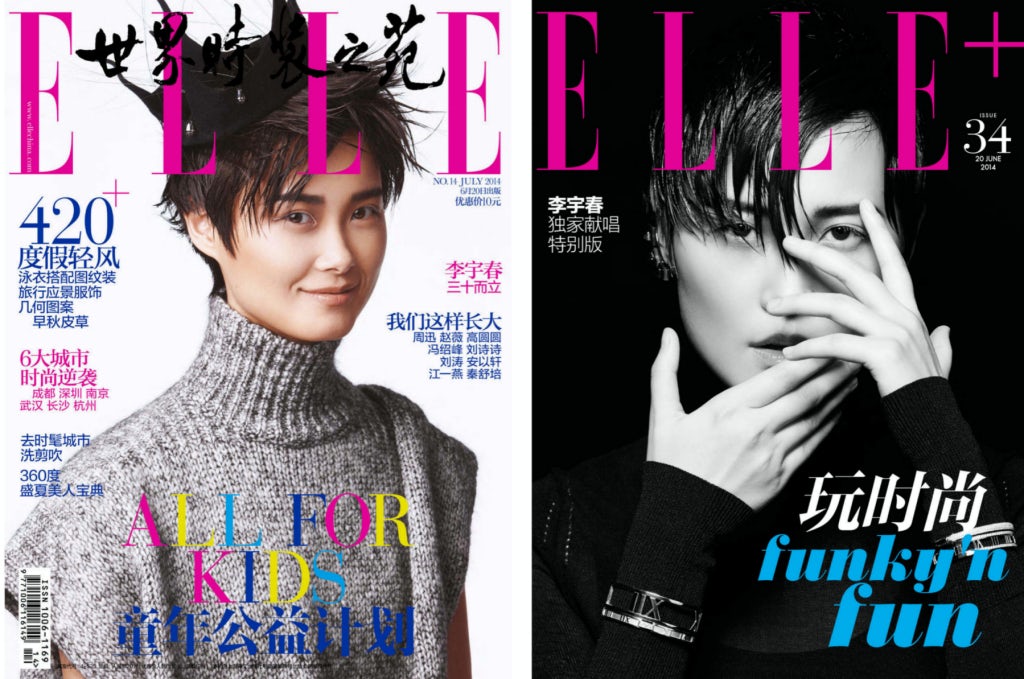 Androgynous female celebrities are making waves Asian entertainment industries, each subject to its own socio-political nuances. Taiwanese American singer and rapper Amber Liu found fame as the only member of South Korean girl group f(x) with an androgynous look, and shares her Nike campaigns with over five million Instagram followers. In Thailand, Lalana Kongtoranin went from being crowned Miss Thailand in 2006 to chopping her hair off and starring in local Netflix show ‘My Beautiful Tomboy’ alongside ads for Levi’s.

In China, “[such] high-profile female celebrities are well known for their ‘gender-neutral’ public personae,” says Dr. Tommy Tse, assistant professor in media and culture at The University of Hong Kong’s Department of Sociology.

Tse reckons that such celebrities “construct their gender-fluid androgynous image to appeal to the LGBT community and fans” — the fact that this has gone mainstream signals a shift in social norms.

It feeds into a wider trend where Chinese women now feel free to wear what makes them feel powerful, be it streetwear or suits. “Especially in the bigger cities, women are starting to come into their own,” says Lauren Hallanan, author of “Digital China: Working with Bloggers, Influencers and KOLs.”

“You see a lot more women in more influential roles in companies and waiting longer to have children. They’re feeling more empowered to dress the way that they want and move into that role [that is traditionally considered to be a] male role,” she adds, mentioning the television series “All is Well” starring Yao Chen that took the nation by storm and inspired a spike in female power suit purchases.

The Elephant in the Room

While dressing androgynously works for some celebrities, there’s a catch. Unlike Western Chanel ambassadors Kristen Stewart and Cara Delevingne (who came out as gay and sexually fluid respectively) or even f(x)’s Liu (who has spoken about being an LGBTQ ally), mainland China’s androgynous female stars refrain from advocating for LGBT rights or commenting on their sexuality.

This is unsurprising. China’s societal norms skew conservative: though Taiwan passed a historic law allowing same-sex couples to marry in June, gay couples in the mainland still don’t have the right, and it was only in 2001 that homosexuality was declassified as a mental illness by the Chinese Psychiatric Association.

The political and media environment in China doesn't allow stars to claim their mediatised androgynous image as their sexual identity.

“The political and media environment in China doesn't allow [stars] to claim their mediatised androgynous image as their sexual identity, [or advocate] LGBT rights,” says Tse, referring to Beijing’s censorship guidelines that span the film industry and social media platforms.

This is in spite of recent progress in the mainland, where netizens recently came together to endorse Taiwan’s “men’s skirt week” and an official municipal government’s social media account was praised for posting a supportive pro-LGBT message online. Changing perceptions on social media haven’t toppled taboos in the eyes of China’s entertainment and management companies.

For one, the Chinese government has been known to censor everything from tattoos to cleavage and male celebrities’ earrings on television. “It’s not like [all media content] can be cracked down on and eradicated, but it may be difficult even for high-profile and powerful figures to deviate from their carefully crafted celebrity image,” adds Tse.

Case in point: Fanxyred’s manager Wang Tianhai has prohibited the band from discussing their sexual orientation, and Li, despite being hailed “the mother of unisex in China” has dodged questions from the media. Meanwhile, Sunnee has also kept a tight lid on her sexual orientation, but came under fire for allegedly sexually harassing other female contestants on Produce 101 — Sunnee responded in an interview that she is a “playful girl who likes to kiss and hug her friends as ordinary girls do.” 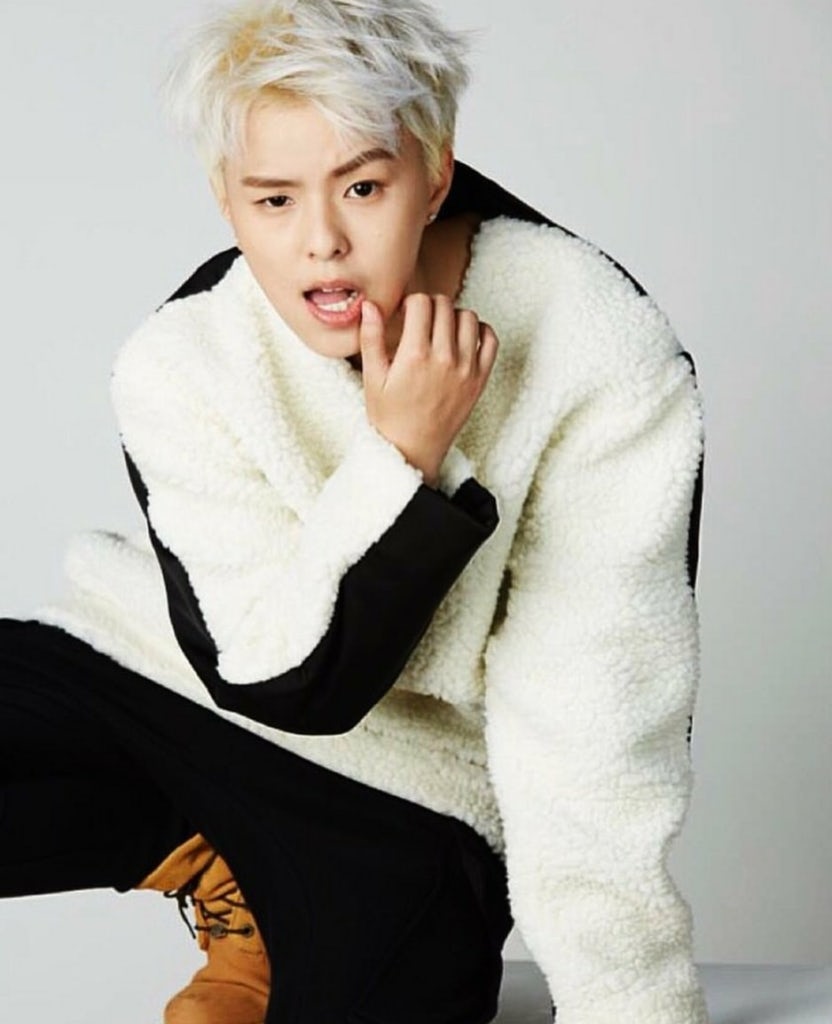 Unlike Western celebrities, who increasingly partake in social justice activism online, most Chinese fans don’t expect or necessarily want their idols to speak out on the matter. “I don’t feel that there’s an expectation that they should step out and start talking about it, least of all from the everyday Chinese person who isn’t a member of the LGBTQ community,” says Hallanan. “Their audience is aware of [gender fluidity] and it’s the appeal.”

As such, the MO for celebrities is usually to avoid censorship, avoid conflict and let their style speak for itself. “There’s no need to shout from the rooftops...I don’t think the celebrities want to be a figurehead for that movement, and would rather express themselves through their career and style choice,” she adds.

In a society where celebrity political activism is anything but the norm, some see value in simply pushing the envelope on what’s seen as beautiful — even if underlying LGBT issues are swept under the carpet. “Honestly, even if these celebrities are straight, I think it’s important that beauty and style norms are being relaxed,” says Chen. “I don’t think it will all happen overnight, and we have to start somewhere.”

On Chinese question-and-answer forum Zhihu, netizens voiced that though celebrities could play a bigger role in normalising LGBTQ identities, it may be too much to expect in China’s political climate. “Coming out of the closet is private, and shouldn’t be something we decide for others,” one user commented.

“Being vocal about one’s sexuality as a public figure isn’t just about themselves…it’s also a statement of encouragement towards those of us who haven’t spoken out yet,” another said.

Being vocal about one’s sexuality as a public figure is also a statement of encouragement towards those of us who haven’t spoken out yet.

Either way, by working with these idols, brands can benefit from the growing cohort of consumers looking to empowering themselves through fashion and beauty. Indeed, despite the silence on issues of gender and sexuality, siding with these celebrities couldbe a boon for brands appealing to progressive Chinese millennials, some of whom are slowly but surely shifting away from the entrenched ideal of “bai shou mei” (being pale, thin and conventionally beautiful.)

“I remember back when Liu Wen started modelling around 2006,” says Chen. “She’s beautiful but has stronger, more angular features than most local models, and it was refreshing to see her campaigns for brands like Chanel. Now, her type of beauty is widely recognised.”

Millennials like Chen have grown up amidst these changing tides. “When big brands work with models and celebrities who don’t fit into China’s cookie-cutter beauty standards, it changes how people think, and how you feel about yourself” Chen adds.

Any uptick in women being empowered to dress as they wish is also an opportunity for brands, who can position themselves as progressive – or simply alternative – by embracing celebrities such as Li, Sunnee and Dou. But they must be cautious in their approach and refrain from overstepping Chinese media’s shifting invisible ‘red lines.’

If [brands are] looking at working with one of these celebrities, they should do it from a style standpoint,” says Hallanan. “It’s a bit risky to align themselves with a movement [that is connected to gender and sexuality identity issues] as it's very sensitive.”