LONDON, United Kingdom — When influential Parisian department store Le Bon Marché launched its “Le Vestiaire Volé aux Hommes” concept — a dedicated menswear area on its womenswear floor — the retailer took a bold risk by directly marketing menswear to its female clientele. “We did it to create disruption in the area and bring something new,” says Jennifer Cuvillier, fashion director and head of style at Le Bon Marché, who initially recruited 10 menswear brands, including Ami, OAMC and Officine Générale, to shrink its wares down to sizes suitable for females. Since Le Vestiaire Volé aux Hommes debuted in September 2015, turnover in the section has increased by an average 15 percent year-on-year.

Women have long been key to success in the menswear market, in part because they often buy clothes for their male partners — or at least influence those purchases. In fact, multiple studies posit that women drive 70 to 80 percent of consumer spending in the US, while 75 percent identify themselves as their household’s primary shopper, according to research compiled by Bridget Brennan, author of “Why She Buys: The New Strategy for Reaching the World’s Most Powerful Consumers.” 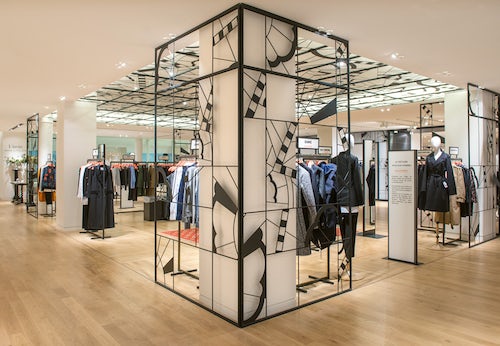 But while women have also been “borrowing from the boys” for years, Le Bon Marché was one of the first retailers to intentionally sell men’s fashion to women, who are increasingly attracted to the Instagram-friendly appeal of the attention-grabbing graphics, oversized fits and unique textures that often characterise menswear items. “It’s key to a woman’s wardrobe that you need a perfect men’s coat and men’s shirt,” says Cuvillier, who attributes increased female interest in men’s clothing to changing perceptions of gender roles. “It’s something different from [what] womenswear brands [are offering].”

As a result, women are becoming even more essential to the fast-growing global menswear market, which currently represents 40 percent of the entire apparel industry and is projected to hit $438 billion by 2020, according to market research firm Euromonitor International. The global menswear market is also growing faster than womenswear; over the next three years it will increase at a compound annual growth rate (CAGR) of 1.5 percent, compared to 1.3 percent for womenswear.

Influential retailers like Ssense, MatchesFashion and KM20 are among those leveraging the opportunity of selling menswear brands like Raf Simons, Craig Green and Wales Bonner to its female customers in an attempt to find new levers of growth and to diversify its offering from competitors.

“Often, our buying team would end up pulling from the men’s racks in showrooms,” says Brigitte Chartrand, womenswear buying director at Ssense, which started carrying menswear brands for women in 2014. “Since we’ve had this strategy, it’s become natural for our womenswear buyers to keep in mind how they can incorporate men’s brands into their buy.”

Chartrand attributes the rise in the category to the sense of gender fluidity that plays a part in defining many of today’s most admired menswear brands. At Ssense, the female clientele gravitates towards men’s streetwear brands, in particular those of Off-White, Raf Simons and Martine Rose, while “most products from Gosha Rubchinskiy sell out within a day or two,” according to Chartrand. “A-Cold-Wall did so well when we first introduced it for women that we just did an exclusive capsule collection with styles that crossover between each gender.”

Yet, despite shifts in consumer perceptions, some of today’s most powerful menswear labels like Supreme, Palace and Ami, all of which have enjoyed a loyal female following since inception, still don’t produce women’s products.

“Ami is a brand for men, not unisex or for women. But from very early on, we started to see women coming to the store and starting to buy the brand,” says Ami’s chief executive Nicolas Santi-Weil, attributing the brand’s female appeal to its French-cool attitude. “At first we thought that about 20 percent of all sales were done by women and it was a bit tricky because you never know if it’s for her or her partner. But since we went digital, we have more figures and we now see that this number is about 35 to 40 percent. In Korea, this is even nearly 50 percent.”

For Ami, joining “Le Vestiaire Volé aux Hommes” at Le Bon Marché was a natural progression. However, some menswear brands remain hesitant to directly market their items to women. “It’s not in my mind as I’m designing and it’s not something that I’m actively focusing on for the future,” says Matthew Williams, who is a former collaborator of Kanye West and Lady Gaga, and the founder of emerging fashion label Alyx. “We definitely find that women continue to buy our menswear and vice versa. I feel that people are attracted to great design, regardless of the gender it’s categorised under.”

Some brands are launching full-fledged womenswear lines to meet demand. After Off-White saw a high volume of women purchasing smaller sizes of the company’s menswear items, it ventured into womenswear for the Spring/Summer 2014 season. Just two years ago, the category accounted for a mere 10 percent of the company’s turnover. This year, that number is expected to reach 50 percent, according to the brand’s founder and creative director Virgil Abloh. 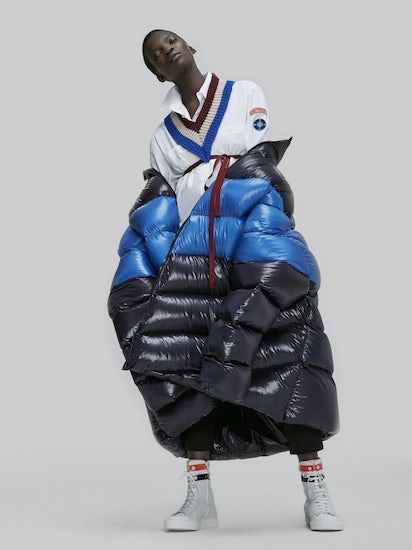 Menswear brands looking to branch out into womenswear, however, might stumble upon a number of challenges. While men tend to repeatedly buy into the same products and brands, the buying behaviour of women, at large, is more frequently affected by seasonality and trends. When brands like Orley and Band of Outsiders launched women’s lines, their businesses became bigger, but at the same time they became harder to sustain. What’s more, a big part of the appeal to menswear for women is its “stolen from the boyfriend’s wardrobe” feel, which gets lost with dedicated womenswear lines.

While leveraging the menswear opportunity remains difficult due to challenges like sizing, brands should not dismiss the chance to speak to women, says Pedro Aguilar, fashion and beauty analyst at Euromonitor International. For one, retailers can allocate a dedicated space within their stores, where consumers can freely look for clothing for both sexes. In March 2015, London department store Selfridges launched an experiential, gender-neutral pop-up called “Agender,” and later this year in March, The Phluid Project — a 3000-square-foot “revolutionary gender-free retail experience” — will open its doors in Manhattan’s Noho neighborhood. It will carry the gender-fluid collections of Levi’s, Champion, Gypsy Sport and more.

Will Men Buy Into Their Girlfriends’ Brands?