LOS ANGELES, United States – Aimee Song, founder of the blog Song of Style, knows how to turn her social media fame into real money. She was one of the first influencers to sign a six-figure endorsement with a beauty label, and wrote a best-selling book, “Capture Your Style.”

She was also an early fixture with Revolve, which has over more than a decade amassed a 2,500-strong influencer network, whose faces and hashtags helped generate nearly $500 million in sales of clothing, accessories and beauty for the site last year. Song is a member of a top-tier group who travel the world on the e-tailer’s dime posting photos of themselves lounging on beaches or boats – using the now ubiquitous “RevolveAroundTheWorld” hashtag. At the Revolve Festival during Coachella earlier this month, Song posted daily outfits and gave a video tour of her home that the retailer hosted her in to her 5.2 million Instagram followers.

Her latest venture marks something of a departure for both Revolve and the 31-year-old mega-influencer. On May 13, the Song of Style x Revolve brand will debut with a 50-piece apparel collection, the first time Revolve has tapped an influencer to front one of its in-house brands. 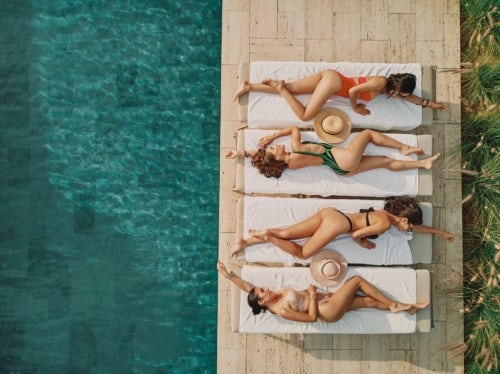 Revolve has about 20 other private-label lines, but there’s more than usual riding on Song of Style. The company’s once-innovative model of leveraging influencers to sell wares has been copied by everyone from Saks Fifth Avenue to Walmart, and Instagram is making it easier to shop directly from its feed, bypassing wholesalers entirely. Though Revolve sales grew about 25 percent last year, a planned initial public offering announced last fall is on hold, a delay analysts say indicates a cool reception to the wholesale model from investors.

A private-label business, by contrast, has higher margins than wholesale and gives more control to the retailer. Though many consumers still associate house brands with cheap, anonymous store labels, that attitude is changing fast, as high-end retailers repackage them as “exclusive” labels with glamorous marketing and high-profile celebrity endorsements.

If Song’s line performs well, it could help convince the market that the e-tailer’s approach has legs, marking Revolve’s continued evolution into a true hybrid retailer and builder of brands. Already, nearly one-third of sales already come from in-house brands, and the most searched-for brand on Revolve is Lovers + Friends, one of the site’s private-label lines, said Michael Mente, co-chief executive of Revolve.

Operating a strong private label and a multi-brand retail business in tandem could help Revolve extend its successful run, though this hinges on striking the right balance between the two.

“It’s neither aggressively promoted but it’s also never denied,” Mente said. “The way we view it is that emotional connection with the brand and the quality of the product has to connect with the consumer on its own. Can Lovers + Friends have a physical store on Rodeo [Drive] for someone to come and really experience this brand? Yes.”

The way we view it is that emotional connection with the brand and the quality of the product has to connect with the consumer on its own.

Revolve acquired Lovers + Friends and several other brands when it bought Alliance Apparel Group in 2014. Over the last four years, the retailer has leaned on Alliance Apparel and co-founder Raissa Gerona to launch brand after brand, including most recently Superdown, a Gen Z-targeting fast-fashion label sold on its own site. The private-label business reported $154 million in net sales last year, or 31 percent of Revolve’s total net sales, with Lovers + Friends the biggest, with nearly $11 million in sales.

“A lot of private label brands are cheaper than other brands that are carried in a store. For us, it’s the same average price if not even slightly higher, which is crazy,” said Gerona, who is also Revolve’s chief brand officer. “It just goes to show how much time … we put into creating brands, as opposed to some private label that you want to buy off-price.”

Song of Style X Revolve marks a new phase in Revolve’s private-label strategy as the retailer enters its first licensing deal. While Alliance Apparel will manufacture the collection, Song retains ownership of the brand and is free to sell it via other retailers after a multi-year exclusivity deal with Revolve. 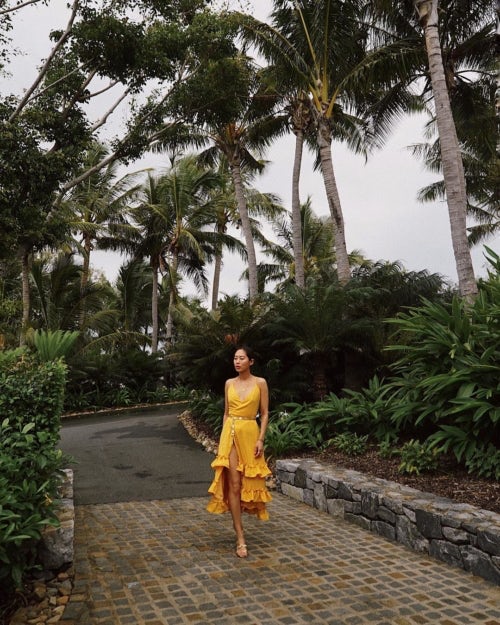 Song previously designed a t-shirt line with her sister, Dani Song, including a “Rose Tits Tee” that she alleges was copied by Zara and H&M. In an interview at the Sunset Tower Hotel in West Hollywood, she said the Revolve collection “feels more adult” thanks to access to technical designers, pattern makers and the retailer’s marketing arm.

Flanked by her manager, two publicists and her best friend, Song cited the styles of Samantha Jones of “Sex and the City,” Princess Diana, Amal Clooney and Meghan Markle as influences. She was wearing black denim cut-off shorts with a Chanel-inspired, neon-accented tweed jacket with piqued shoulders from Song of Style x Revolve. It retails for $238, priced similarly to Revolve’s entry contemporary offerings, including Amanda Uprichard and For Love & Lemons.

“I don’t do a lot of product collaborations on purpose,” Song said. “I am choosy, I don’t feel like just putting my name out there for everything. It has to speak to me.”

In Revolve’s vast influencer network, Song is among a few elite, high-converting social media stars like Camila Coelho and Negin Mirsalehi (Revolve’s “Influencer of the Year” for two years running). They have long-term deals with the retailer and are said to be paid handsomely to attend Revolve trips and create content throughout the year. Revolve declined to comment on influencer fees.

Others with smaller followings might still participate in group trips: one recent junket to Australia had 101 influencers in attendance, some flown out by Revolve and others who bought their own tickets. At the low end, influencers might receive a wristband to a Revolve event or free clothes in exchange for promoting the site.

It’s going to be very hard for any pure play retailer to forecast demand in the future.

The deal has the potential to put Revolve on the fashion map in its own right, rather than as a seller of other designers’ clothes. Revolve’s exclusive merchandise could serve as a draw at a time when retailers increasingly struggle to retain customers, said Brian Owens, vice president of retail insights at Kantar.

That problem is particularly thorny for online shops, which can find themselves in a race to the bottom on price or continually ratcheting up marketing budgets to chase consumers who only care about the best deal. Another concern is the growing fragmentation in the way in which people buy, which has been exacerbated by Google, Facebook and Instagram allowing consumers to shop directly on these digital platforms.

Revolve has the advantage of being among the first to invest heavily in influencer marketing, and is still one of the few retailers to build its entire brand around social media stars, said Lauren Price, vice president at Gartner.

“Being positioned not just as a retailer definitely puts them in a better light,” said Price.

How Can Brands Stand Out in China's Oversaturated Influencer Economy?