LOS ANGELES, United States — The word “Levi’s” is practically synonymous with denim jeans. But the 164-year-old American heritage brand is hoping to expand its dominance to other product categories.

“We started saying, ‘How do we pivot from share of denim to share of closet?’” says James ‘JC’ Curleigh, Levi’s executive vice president and president of global brands. “And you find yourself exploring Levi's categories a little bit differently.” That means belts, t-shirts, chambray shirts, knits, wovens and, most importantly for the brand at the present moment, the 1967 70505 Type III trucker jacket. With its signature front ‘V’ seams, the hardy workwear garment became fashionable when it was worn by the likes of George Harrison and Jefferson Airplane. 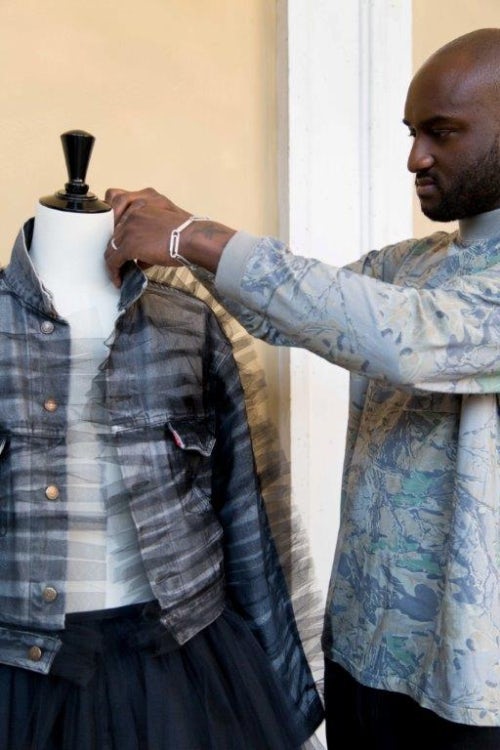 To mark the 50th anniversary of the Type III trucker jacket, Levi’s enlisted 50 influencers from around the world and asked them to customise or design their own versions of the trucker jacket, which will be revealed Thursday night at a splashy event before a crowd of about 400 influencers and members of the media at the Levi’s Haus, a showroom-cum-performance space.

“Having these adjacencies with the people at the center of culture is super important, whether they are musicians or fashion designers,” says Jonathan Cheung, Levi’s head of design. “That’s why events like this 50th anniversary are important. There’s no immediate financial gain because we are not selling these jackets and we are not making reproductions of these jackets.” For Cheung, the aim is to grow brand relevance, which will benefit the company’s entire offering. “If you set your brand as a rocket ship, everything else will be pulled into the slipstream.”

If you set your brand as a rocket ship, everything else will be pulled into the slipstream.

"I went back to my teenage years to come up with the ultimate moody teen trench jean jacket," says stylist Karla Welch. "Not many brands can cross cultures like Levi's does," adds Vogue Australia's Christine Centenera, "It's ageless, it's genderless, it's reliable, it's functional and it's personal.... They're constantly pushing things forward in terms of design, collaborations and technology. Yet they still stay true to their classics and heritage."

"I had gotten my first trucker jacket in a vintage shop in Chicago and still wear it to this day," says Virgil Abloh. "My inspiration was to give a masculine trucker jacket a feminine feel."

Thursday’s event is sure to flood the Instagram feeds of the brand’s army of collaborators, tapping what has become one of the most effective ways to generate buzz — and drive sales — in today’s fragmented retail market. The decision to focus on the trucker jacket comes at just the right time. Trucker jackets are having a moment. In the first half of 2017, new arrivals of the style increased by 192 percent year-over-year, according to Edited, a retail analytics firm. In many ways, the resurgence of 1990s trends, starting in 2013 with the “normcore” movement, has helped to fuel Levi’s own resurgence as well. “I think we've been lucky, but also a part of that is you have to create your own luck,” says Cheung.

One of the chief architects of that luck is chief executive Charles “Chip” Bergh, who arrived at parent company Levi Strauss & Co. in 2011 after 28 years at Procter & Gamble. At that point, the company’s revenue had been stuck around $4 billion for about a decade. A substantial debt loomed. The rise of athleisure looked like a category killer for denim and a barrier for growing the women’s side of the business, which only accounted for 25 percent of sales. At the same time, the rise of fast fashion and premium denim, the fastest growing segment of the denim market in 2013, squeezed Levi’s core business from both sides.

Bergh got to work reinvigorating the company by overhauling its leadership team (9 of his 11 member executive team turned over in the first 18 months) and setting ambitious annualised savings targets. He hired Curleigh and, together, they restructured the Levi’s design and merchandise teams so that the former no longer reported into the latter, allowing for greater creative autonomy. In 2013, Cheung joined the team as the brand’s first ever head of global design for both men and women, the same year Bergh moved Levi’s innovation center from Turkey to San Francisco, opening the Eureka Innovation Lab, and Karyn Hillman was brought on as chief product officer. With some of the essential building blocks in place, Bergh set a series of new priorities: stabilise the core denim business, grow sales to women and amplify the brand’s non-jean categories.

At that point, Levi’s was still seen as a desirable choice in men’s jeans. But when it came to women’s fashion and non-denim categories, Levi’s was seen as behind the curve. Shifting that perception — and boosting product innovation — have been central to the brand’s turnaround efforts. After years of letting the historic core styles, specifically the iconic 501, remain largely unchanged, Cheung and Hillman started to modernise the fits and finishings. They started with the release of the cropped and slimmer 501CT in 2014 for women, a reaction to the way a new generation of shoppers were buying and tailoring vintage Levi’s for themselves (or heading to business such as Re/Done, founded in 2014, for repurposed pairs). It was followed by the release of the women’s 700 series, a collection of fits and washes that completely replaced the former Curve ID line, and the updated 505c. In 2016, Levi’s released new 501 stretch and skinny styles for both men and women. 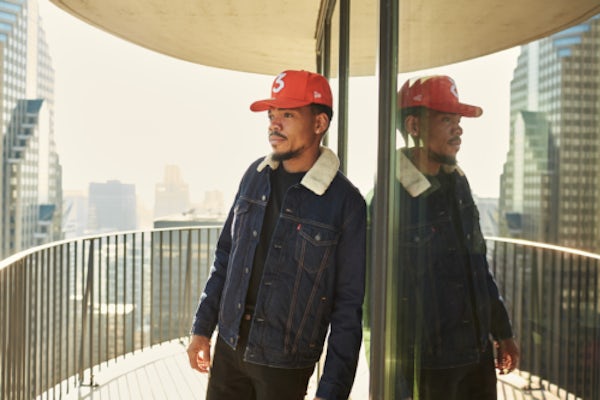 “Prior to my time here, [Levi’s] had lost its identity a little bit,” says Cheung. “What we decided to do is not to chase and really celebrate what makes us different and what makes us special, which is the 501 and the trucker jacket.”

“I think one of the stealth success factors in the last few years — in the past, we would try to see what the trend was and then chase it,” says Curleigh. “So, we have made the pivot, and it's not a perfect pivot, but it's a purposeful pivot. We’ve said, ‘Why not start as the leader setting the trends, identifying where we see it going and getting there first.’” He cited the “wedgie” fit jean, which sold out quickly in 2016 after Kylie Jenner posted it on Instagram, as one example. The trucker jacket is another. “I believe we played a lead, if not the lead role, in setting the trucker jacket trend that a lot of our competitors are enjoying today,” says Curleigh. “It’s the moment to actually explain to the next generation that we invented it and, at the same time, not only did we invent it, but we're happy to customise it and evolve it.” Plus, any opportunity to tell the brand’s story and dive into its long history of outfitting everyone from Marilyn Monroe to Steve Jobs is valuable, according to Curleigh.

For Levi’s, the approach has worked. The women’s division returned to growth in the second half of 2014, the same year the brand surpassed $4 billion in sales for the first time in 15 years. In 2016, revenue reached $4.6 billion, marking the fourth consecutive year of top and bottom line growth for the first time in 20 years. In the most recent quarter ending May 28, net revenue grew six percent to $1.1 billion and direct-to-consumer revenue great 13 percent. The women’s business is now a more than $1 billion annual business, up 40 percent since 2015. One white "batwing" logo tee is sold every 17 seconds during an average week. “I actually bumped into JC the other week in the car park and I said, ‘When do we get to call it a comeback?’” jokes Cheung.

Semantics aside, Levi’s is back on track. But in order to continue its momemtum, the brand must broaden the number of product categories in which it has genuine credibility. Even though Levi’s is the global leader in jeans, accounting for 4.7 percent of the market ahead of VF Corporation and PVH, the $93 billion global denim market only grew at a compounded annual growth rate of 4 percent during the last 5 years, a rate which is due to decline to 2 percent over the next five years, according to Euromonitor.

“One of the biggest challenges [across the industry] is trying to figure out how to displace this athletic influence as the driving lifestyle,” says NPD’s chief industry analyst Marshal Cohen. “The world is looking for the next thing and fashion has really been stuck in trying to find it; I think it’s hiding right there in the jeans.” But Cohen underscores the growing importance of secondary product categories. “Some behemoth brands fall short on that,” he says. Brands need to “continually advance those secondary categories [to amplify] the essence of the overall brand.” It is achieved through new product and innovation, which translate into relevance. “You can’t become complacent,” says Cohen, adding that he thinks Levi’s can achieve that. “They have and yes, they will do it again.” 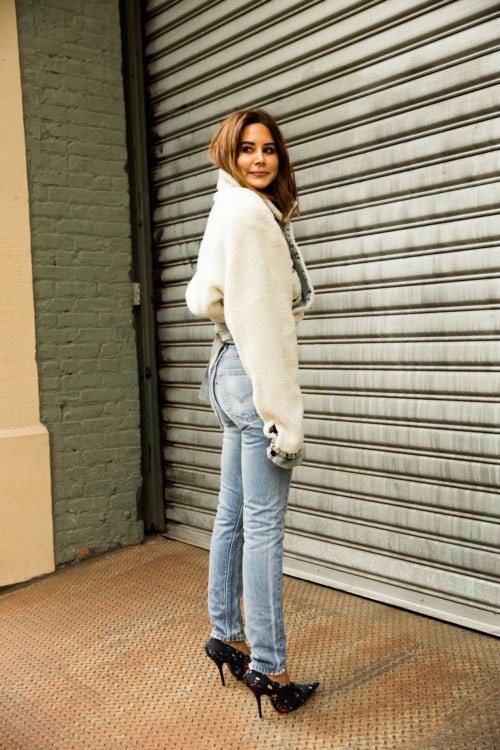 Building buzz around the trucker jacket also helps Levi’s efforts to triage its business in the ailing US wholesale market, which accounts for about 70 percent of the brand’s US business and remains in decline. (In the third quarter of 2017, wholesale revenue grew 2 percent overall due to strength in Europe.) Most of the wholesale business, however, is centered on jeans, and in direct retail, the rest of its categories are growing. “How can we use those as proof points with our wholesale partners?” asks Curleigh. “Because, quite frankly, they are also looking for solutions and we believe we're a future solution provider to them beyond just our jeans and our denim.” Exclusive product is another part of that effort, as is expanding into new doors. “We've opened up more specialty doors in the last year than we have in the last five years combined,” says Curleigh.

The collaborations emphasise Levi’s premium offerings, too. “It's not just about one moment and 50 people and 50 trucker jackets,” he says. “We've had an ongoing relationship with the Supreme trucker jacket, with Off-White, with Gosha [Rubchinskiy]. We've done amazing things with even broader platforms like Macy’s [Levi’s Limited collection]. We’ve just launched a variation on the commuter jacket with Google.”

The buzz will also hopefully drive shoppers into Levi’s stores: select retail locations with “tailor shops” will allow for on-site jacket customization, something the brand is looking to evolve in the future. But first, it’s about getting the message out. “We've turned on our marketing engine again,” says Curleigh. “And we've put a lot more fuel in that tank.”

Disclosure: Chantal Fernandez travelled to Los Angeles as a guest of Levi’s.