During New York Fashion Week in September, The New York Times Technology section exclaimed: "Young bloggers Have Ear of Fashion Heavyweights." Then, Women's Wear Daily declared: "Everyone's doing it: Brands take on Social Media," and followed with  "Bricks Versus Clicks: Front Row at D&G," ranking the front row presence of bloggers at D&G in Milan as a "Defining Moment" of the Spring/Summer 2010 collections.

But it didn't there. The Independent in London showcased the "New Kids on the Blog," Metro News in Toronto said "Style bloggers bring fashion to the masses," the Irish Independent said fashion blogs are "Writing with Style," the Financial Times revealed that "Style bloggers take centre stage" and the International Herald Tribune chimed in, saying that we are moving "From Couture -- to Conversation."

And while nothing delights us more than to see bloggers finally getting the attention and respect they deserve, the time has come for a bit of a social media reality check. 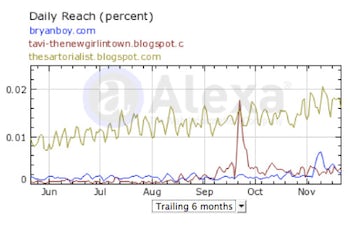 According to some quick research on Alexa, the recent attention has propelled traffic of these fashion blogs to record highs, and for a short period, tiny Tavi's traffic even eclipsed that of the superblogger Scott Schuman. All the while, brands were chasing the "new front row" for attention and approval, an international luxury conference was convened in Berlin to explore how social media is revolutionising the fashion industry, and the star bloggers were trying to make sense of their overnight fame and newfound industry influence.

But what happens next? It's time to take stock to assess how each of the constituent players in this rapidly developing online fashion eco-system can develop over the long-term. For everyone involved, this will require not only a change of media, but also a change of mindset.

At that now infamous D&G show in Milan, where bloggers were prominently placed in the front row for all to see, laptops were also set up in front of their seats. The objective, it appears, was to make it look like they were "live" blogging and tweeting during the show, even though none of the selected photobloggers (Scott Schuman, Tommy Ton, and Garance Doré) work in this way. Rather, the photobloggers take hundreds of photos over the course of a day and then edit their photos down before publishing only the best ones. In reality, only Bryanboy is a regular Twitter user and the only one who might be considered a "live" blogger.

As a PR stunt, the illusion of live blogging may have done wonders for D&G as press photos of the bloggers appeared in major publications around the world. Conjuring up images of young people streaming their ideas live from the front row made for a great story, but it probably made the bloggers themselves feel uncomfortable. D&G apparently wanted to be seen as the first to truly embrace media, even though other brands have been doing so for several seasons now, albeit in a quieter manner.

It's not enough to be seen to embrace social media. Brands and retailers must also build real long-term symbiotic relationships with bloggers, not short-term exploitative ones. Excellent examples of this are Lane Crawford, who from the start have supported and worked with Tommy Ton on their ad campaigns, and Burberry and DKNY who hired Mr. Schuman for his photography skills to appear on their website and in their advertisements, respectively.

Finally, consider the point made by Yuli Ziv, a New York-based fashion blogger who said to brands last week: "If you are looking for sales, make sure to provide [bloggers] the detailed product info, pricing and availability, if  SEO optimization is your top goal - make sure you use the right keywords in your pitch, if publicity buzz is what makes you satisfied - give them juicy stories, and if you simply want love - give them the reasons to love you." It's as simple as that.

BLOGGERS: Operate with the highest-levels of integrity and don't lose your independent voice and point-of-view.


In his book "Watching the Watchdog: Bloggers As the Fifth Estate," author Stephen D. Cooper argues that bloggers can hold companies and the mainstream media accountable for their actions. But in order to do so, bloggers must simultaneously maintain healthy, positive relationships with the brands with whom they work, while also fiercely protecting their independence.

Even though we don't necessarily agree with the recent FTC ruling holding bloggers to a different level of accountability than the mainstream press, the underlying principles are sensible. Don't allow your praise to be bought. Accept gifts like everyone else in the industry, but be transparent when you have been given something to review or been flown in to cover an event. And, most of all, say what you think! After all, this is why your audience comes to you in the first place. The minute bloggers become part of the easily-manipulated fashion media machinery, they lose their unique selling proposition.

If bloggers want to be taken seriously, they must operate like professionals. Indeed, it is the most professional of bloggers — those who work hard, operate with integrity, and maintain good relationships — who are having the most financial success, attracting advertising, sponsorship and even consulting and employment opportunities.


MAINSTREAM MEDIA: Engage with bloggers as professionals and consider making them your new colleagues.


The rise of fashion bloggers does not necessarily mean the death of fashion editors. There is more than enough room for everyone to take part in the ever-growing sphere of fashion writing and communication.

However, more than just writing about bloggers (over and over again), the mainstream media may want to consider engaging with them as fellow professionals. Prior to last week's IHT conference in Berlin, Suzy Menkes agreed to have the tables turned on her, participating in an interview with Mary Scherpe on her blog, Quite Contrary. While many other journalists were interviewing bloggers, Suzy was letting a blogger interview her. Suzy also made an effort to meet with bloggers in Berlin who were (really) blogging and tweeting from the front rows. 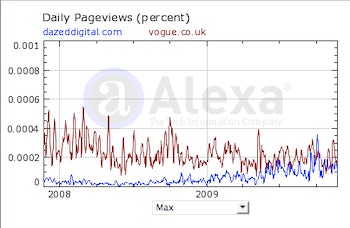 Jefferson Hack, Editorial Director of Dazed Group, has taken this one step further. When hiring for Dazed Digital a few years back, he did not look to traditional editors or photographers to lead his new digital team. Rather, he turned to the internet's burgeoning fashion talents, hiring photographer Alistair Allan as Digital Director and prodigious fashion blogger Susie Bubble as Commissioning Editor. Long before much of the mainstream media was even paying attention to bloggers, Jefferson was already learning from them.

The results have been impressive. Independently-owned Dazed Digital now receives about 2 million pageviews per month, placing it in the leagues of Conde Nast-owned Vogue.co.uk, according to Alexa.

Still, I regularly hear reports of major online fashion properties who "can't find the budgets" to hire young digital natives to help them amp up their online content. This is pennywise, pound foolish, especially as these young talents can be hired for a fraction of the cost of major photo shoot or big-time editor.

If the mainstream media are to keep up with all of the new developments, technologies and tools of online media, they might as well turn to the experts. Bloggers are at the forefront of content innovation on the internet and have the know-how to use social media effectively. In today's internet world, it is innovative content attracts viral attention and fosters relationships with readers, which are also the most important drivers of traffic and loyalty.

Imran Amed is Editor of The Business of Fashion